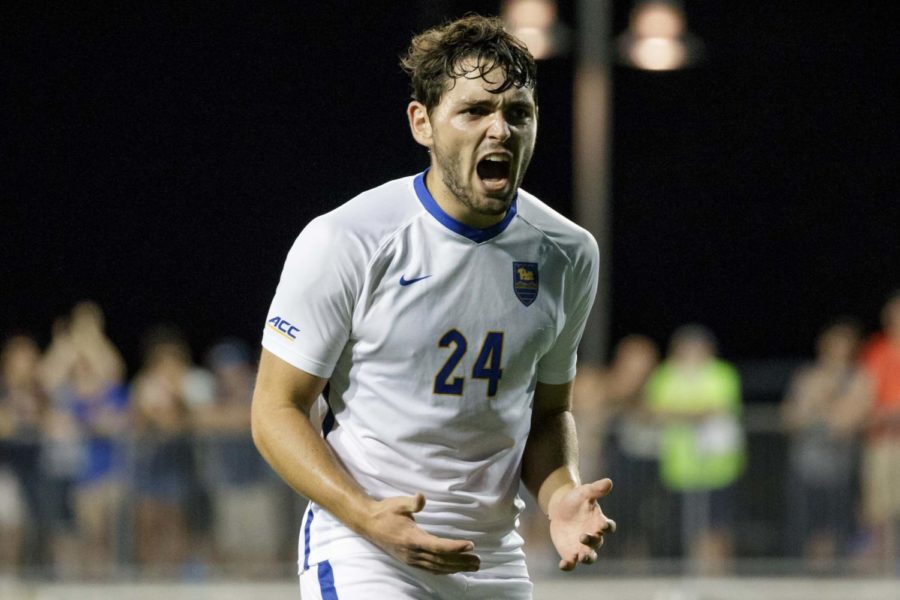 Both sides opened the game with extremely aggressive-minded play, and Monmouth put the pressure on the Panthers’ back line early. Pitt struggled to control possession, and the Hawks challenged Pitt senior goalkeeper Nico Campuzano with a couple of shots on goal. But neither team managed to finish early chances. Pitt head coach Jay Vidovich highlighted that Monmouth’s experience from its first game likely caused the team’s aggressiveness out of the gate.

“Monmouth had already experienced the tension and the nerves of a game where it’s do or die,” he said. “So they were already a little bit more experienced with that. But I think after a little bit we played our way into the game, we competed and defended as a group.”

The dynamic of the game changed in the 25th minute. Pitt slowly took control of the pace of the game, and sophomore fullback Raphael Crivello played a high-arching ball right to the feel of star sophomore forward Valentin Noel, who rocketed the ball into the bottom-right corner to give Pitt a 1-0 advantage. Vidovich praised the vision of Crivello, and viewed the first goal as a springboard for the offense.

“It was something that we were talking about with Raphael ahead of time,” he said. “They were trying to press high on us, and it was great recognition with the ball.”

Pitt possessed the ball well after its initial goal, but a brief injury to senior fullback Jasper Loeffelsend gave Monmouth a great chance to attack. The Panthers were fortunate to escape a point-blank miss by the Hawks in the 37th minute, and quickly got on the counterattack. After a free kick shot attempt by sophomore midfielder Veljko Petkovic earned Pitt a corner, and Petkovic found the head of senior defender Bryce Washington to put the Panthers up 2-0.

Pitt remained aggressive on the attack for the remainder of the half, but a shot from Petkovic that rocketed off the crossbar wound up as the closest the team got to scoring in the final six minutes. Despite some initial sluggishness, Pitt took a comfortable 2-0 lead into halftime.

After building momentum on attack in the latter part of the first half, the Panthers wasted no time in the second half. On their fourth corner kick of the game, Petkovic sent a ball into the middle of the box, and senior forward Alexander Dexter came out of the scramble with a shot into the bottom-right corner. The opportunistic goal from Dexter put the Panthers up 3-0 in the 52nd minute of play.

The third goal of the day gave Petkovic his second assist of the match, both on services from corner kicks. Set pieces have been a strength for the Panthers down the stretch, and Vidovich elaborated on Pitt’s proficiency on corner kicks after the match.

“Particularly all spring it’s been a big asset to us,” he said. “Obviously we sent a warning sign in the fall that we were going to be a high-scoring team, an explosive team, and everyone’s been pretty well-keyed on that all Spring, so we’ve had to rely on that. Veljko has a quality service, and hats off to the guys getting on the end of his services today.”

Just a few minutes later, Pitt built up yet another threatening attack, and a powerful service from first-year forward Bertin Jacquesson deflected off of a Monmouth defender and found the back of the net. The 57th minute own-goal extended the Panthers’ advantage to 4-0, and put them in great position to drop back and protect their lead.

While Pitt certainly played less aggressively after its fourth goal, they didn’t completely slam on the brakes. Loeffelsend had a free run down the right side in the 71st minute, and the ACC’s assists leader played an intelligent pass through to junior midfielder Rodrigo Almeida, who easily finished and gave the Panthers a 5-0 lead.

The Panthers were charged with 17 total fouls in the match, and they eventually made a crucial mistake in their own box. Pitt gifted the Hawks a penalty shot in the 77th minute, which they buried to make the score 5-1 late.

In the midst of a chippy match from start to finish, a scary moment occurred in the 87th minute when Washington took a shot to the face on an attempted bicycle kick by Monmouth forward Julian Gomez. Officials gave Gomez a red card, and Pitt immediately got back on the attack after the foul.

Almeida drew a penalty kick in the 88th minute, and senior defender Sito Sena got the opportunity to score his first goal of the season and extend the Pitt advantage to a final score of 6-1.

“They’re the number one team in the country, they gave us a lesson in how to compete in a big game,” Vidovich said. “I think we just pushed as a group. They understood we had to mature quite a bit competitively.”

The win marked the second ever victory in Pitt program history, with the first coming just last season against Lehigh. Pitt advances to the regional semifinal and will face Central Florida on Thursday.