Your guide to the May 18 mayoral primary election 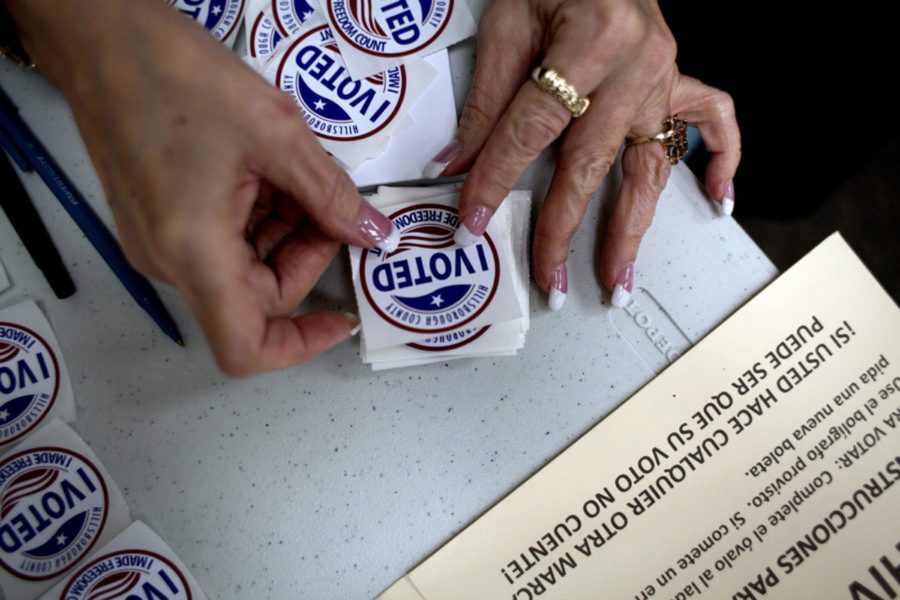 A poll worker gets “I Voted” stickers ready to hand to voters as they finish up at the ballot booths.

Challengers Ed Gainey, Tony Moreno and Mike Thompson will face off against Pittsburgh Mayor Bill Peduto in next Tuesday’s primary elections, after a heated campaign season amid the COVID-19 pandemic.

In-person voting takes place on May 18 between 7 a.m. to 8 p.m., and all requested mail-in or absentee ballots must be turned in before 8 p.m. on Election Day. Unless a Republican enters the race for mayor, the winner of the Democratic primary will run unopposed in November’s general election.

Peduto was elected mayor in 2013 after beating Republican candidate Joshua Wander and independent Lester Ludwig, with 84.3% of the vote. Peduto was reelected as mayor in 2017 after beating challengers John Welch and Darlene Harris, and running unopposed in the general election.

Peduto signed three gun control bills into law in spring 2019. The bills, written partly in response to the Tree of Life massacre, banned the usage of certain assault and semi-automatic weapons and allows for weapons to be temporarily seized under court order if someone is posed as an “extreme risk” to themselves or the community.

According to his website, during his time as mayor, Peduto hired the highest number of police officers, firefighters and building inspectors in decades, doubled the amount of street paving since 2014 and “created the most transparent government in our city’s history” by posting daily schedules, public paving lists and building inspection reports.

Peduto also increased municipal workers’ minimum wage to $15 an hour, created Pittsburgh’s first Office of Equity and built a $120 million reserve fund, which he utilized to “withstand the pandemic without layoffs,” according to his website.

Peduto released a public statement in response to a protest outside his house in the City’s Point Breeze neighborhood, in which protesters voiced their concerns about the City police’s responses to protests and some urged Peduto to resign. The protest in Point Breeze followed the arrest of a protester by plainclothes police in an unmarked vehicle a few days earlier.

Peduto also said he disagrees with defunding the police, and dislikes the phrase “ACAB,” or “All Cops Are Bastards.”

Gainey is a current member of the Pennsylvania House of Representatives, representing District 24 since 2013. Gainey’s platform focuses on “fighting for a Pittsburgh for all of us,” and uniting and representing all of Pittsburgh’s citizens.

According to his campaign website, other Gainey priorities include demilitarizing police weapons and training, and focusing police training on de-escalation techniques and providing resources — such as social workers — to citizens who suffer from substance abuse, mental illness and homelessness.

Gainey’s campaign also prioritizes “expanding affordable housing options, preventing displacement and protecting neighborhoods from predatory development,” by partnering with the Housing Authority of the City of Pittsburgh and Urban Redevelopment Authority, according to his website.

Moreno, an Army veteran and retired police officer, is running for mayor for the first time. After serving in the police force for 24 years, Moreno said he “knows what it takes to build the public’s trust in its law enforcement.”

According to his website, Moreno supports police reform plans by increasing Pittsburgh police’s “integrity, respect and transparency,” and “proactively” addressing homelessness, addiction and mental illness. Moreno plans on working with community leaders, such as mental health professionals and community organizations to create, develop and implement proper crisis intervention training by training officers to better identify and help those struggling with mental illness.

Moreno wants to “overhaul” the police hiring process to hire a more diverse and qualified group of officers that better “reflects and understands the needs of those they serve.”

Moreno wants to build a “culture of transparency and accountability,” specifically in reviewing the new property tax which sets aside money for Pittsburgh parks. After providing the Pittsburgh community with the information necessary to make a decision on the tax, Moreno said he will urge a second vote on the tax.

Thompson is an employee at Butler County Community College, a community organizer and Uber and Lyft driver. According to his website, Thompson is running with an “intersectional, grassroots campaign.”

Using East Pittsburgh as a “model,” Thompson wants to cut police funding in half and “Fire every single Pittsburgh police officer. Every one,” and “start over on policing,” according to his website. Thompson also wants to reallocate the police budget to fund social workers, and allow social workers to respond to homeless or mentally ill people in need or in crisis.

Thompson also believes housing is a “human right,” and “all people deserve affordable housing,” as he is a South Oakland resident and has lived — and currently lives — in public housing.

The ballot will also include voting on judges for the statewide Commonwealth, Superior and Supreme courts, as well as the County Court of Common Pleas and the position of County sheriff.

If approved, the Allegheny County Code will be amended to prohibit solitary confinement (more than 20 hours per day) in the Allegheny County Jail, except for limited circumstances and not to be used as punishment. The use of restraining chairs, chemical agents or leg shackles would also be prohibited. The jail’s warden would be required to prepare a monthly report regarding use of solitary confinement and lock downs.

If approved, Pittsburgh’s Home Rule Charter would be amended to prohibit the City police from executing warrants at any residence without knocking and announcing themselves first.

This question asks Pennsylvanians to vote on making municipal fire departments and emergency medical companies with paid employees eligible to apply for loans from an existing state program. Only volunteer emergency companies can currently apply for this program, which would allow cities to modernize facilities and equipment.

If approved, this amendment would allow the General Assembly to end or extend all or part of a disaster emergency declaration without needing the governor’s approval. The House of Representatives and Senate would be able to do this through a concurrent resolution passed by simple majority, if approved.

If approved, this amendment would protect Pennsylvania citizens against denial of equal rights based on their ethnicity or race.