The Pitt News • May 19, 2021 • https://pittnews.com/article/165540/news/stand-in-solidarity-with-palestine-rally-calls-to-amplify-palestinian-voices-end-us-funding-of-israel/

‘Stand in Solidarity with Palestine’ rally calls to amplify Palestinian voices, end US funding of Israel 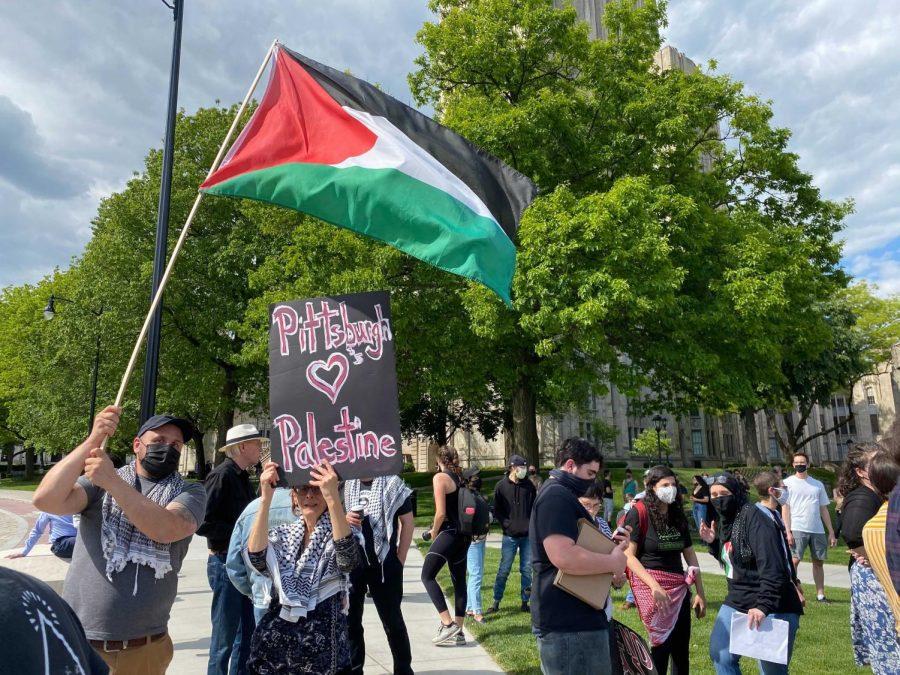 The Pittsburgh chapters of the Democratic Socialists of America and Council on American-Islamic Relations hosted a “Stand in Solidarity with Palestine” rally at the corner of Forbes Avenue and Bigelow Boulevard on Friday afternoon.

A group of nearly 250 people gathered in Oakland on Friday afternoon in solidarity with Palestine. The group sang the lyrics to “Which Side Are You On?” an activist song commonly sung at many protests, while waving Palestinian flags.

The Pittsburgh chapters of the Democratic Socialists of America and Council on American-Islamic Relations hosted the “Stand in Solidarity with Palestine” rally at the corner of Forbes Avenue and Bigelow Boulevard. The rally was called to show support for the Palestinian community after the increase in violence between the Israeli government and Palestinians in Gaza, Jerusalem and the West Bank.

The rally began with the group chanting “From the river to the sea, Palestine will be free,” a slogan used in the Palestinian liberation movement. The chant calls for Palestine to be politically and geographically restored to its pre-1948 status, before Israel’s founding and the partition of the British Mandate for Palestine into Arab and Jewish states.

Organizers from DSA announced on Facebook that the rally was held in part to call on the Biden administration and members of Congress to publicly condemn the actions of Israel. The forced evictions of Palestinian families from the East Jerusalem neighborhood of Sheikh Jarrah, the violent attack from Israeli forces onto worshippers at Al-Aqsa mosque, a holy site for Muslims, and the increase of bombings in Gaza are the most recent acts that have sparked similar protests around the world.

Tension between the Israeli government and Palestinians has increased significantly since Israel’s inconclusive elections in March, the fourth in two years, which critics of current Prime Minister Benjamin Netanyahu say has led him to apply military pressure in Gaza to gain more support from his right-wing rivals. In retaliation to the attack on Al-Aqsa, Hamas, a militant group in Gaza, fired rockets into Israel, resulting in constant fighting between Hamas and Israeli forces. In an attempt to target supposed Hamas militants in Gaza, Israeli airstrikes destroyed a building last week which housed members of Al Jazeera and The Associated Press.

The situation began in 1948 with the Nakba, or “catastrophe” in Arabic, which refers to the displacement of over 750,000 Palestinians from their homes and the destruction of around 400 Palestinian villages, which occurred as a result of the Arab-Israeli war and formation of the state of Israel. The tension and violence between Israel and Palestine has increased over decades, creating a severe refugee crisis. Most of what used to be Palestine is now acknowledged as Israel, and the remaining Palestinian land includes Gaza, the West Bank and parts of Jerusalem.

Kate Daher, a member of the Pittsburgh Palestine Solidarity Committee, said the media often tells a story that is in favor of Israel, while silencing Palestinian voices. Daher quoted Malcolm X, who once said “If you’re not careful the newspapers will have you hating the people who are being oppressed and loving the people who are doing the oppressing.”

Daher said rather than inform Western audiences on the violent actions of the Israeli government towards Palestinians, “corporate media” encourages people to “celebrate Israeli independence over the destruction of Palestine.”

“They will not tell you that the latest round of violence started when the Israeli police forces raided the Al-Aqsa mosque. They trashed it and beat Palestinian Muslims while they were praying,” Daher said. “They will not tell you that the deadly exchange between the U.S. and Israeli police has led to an increase in militarization of US forces using the same brutal methods as do Israeli cops, from Ferguson to Pittsburgh.”

Throughout the rally, Christine Mohamed, executive director of CAIR Pittsburgh, called on the audience to reach out to their local representatives to demand action for Palestinians. She passed out flyers and stickers with resources on how members of the community could contact their local and state officials, including by signing petitions to demilitarize Pittsburgh.

Protesters at the rally emphasized the need to stop the United States from providing aid to the Israeli government, with many signs in the crowd displaying messages of divestment. One sign read “Stop Funding Apartheid.”

Ted Everhart, a leader from DSA, attended the protest with a guitar in hand, leading the group through songs and chants to emphasize support for Palestine. Everhart chanted “Not another nickel, not another dime. No more money for Israel’s crimes” with protesters.

Another emphasis of the rally was to amplify the voices of Palestinians living in Pittsburgh. Palestinians of all ages shared their experiences and struggles, demanding the American people stand with them.

Ahmad, a Palestinian immigrant and Pitt alumnus, said his experience visiting Palestine to see his mother was heartbreaking because even though he had an American passport, the Israeli Defense Force soldiers at the checkpoints treated him harshly. He said he just wanted to see the beauty of Palestine — though he couldn’t — and that it was the beauty of the land that resulted in such violence.

“I wanted to see our Palestinian beaches, white sand beaches. Palestine is heaven on earth, really that’s all this fighting. If it was uninhabitable land no one would fight over it. That’s why you see all the killing and people will do whatever to get it,” Ahmad said. “We have four seas, we have mountains that border Lebanon where the snow never melts. You can’t describe how beautiful Palestine is.”

Ahmad said those who are a part of and close to the Palestinian community have known about the violence occurring in occupied Palestine, which is why he is asking Americans to side with human rights and “seek the truth.”

“I’m speaking to our good, decent, loyal, honorable Americans here. Everybody in the Arab world, Muslim world and the Palestinian world knows what we are talking about,” Ahmad said. “I encourage every honorable person to open their social media and learn the truth on their own.”

Like Ahmad, many speakers and those in the audience emphasized the need to seek the truth about the Israeli government’s violent actions towards Palestinians.

Orelle Magnani, a junior at Allderdice High School in Pittsburgh’s Squirrel Hill neighborhood, said she thinks it’s especially important for the younger generation to stay updated on issues of social justice from reliable sources and for them to spread awareness through social media.

Magnani held a sign that read “Zionism is not Judasim” and said standing with the Palestinian community should not depend on identity. She said her beliefs as a Jewish person do not align with the actions of Zionists in Israel.

“As Jews, and as everybody, we must unite together to fight for freedom and equality. Judaism is not about stealing land, it’s not about murdering innocent people, it’s about living together peacefully and committing good acts, being kind and compassionate,” Magnani said. “That’s not what Zionism is — it’s genocide, fascism and apartheid — and I do not stand for that and neither should anybody regardless of religion.”

Jacob Richards, a recent Pitt alumnus and former president of Students for Justice in Palestine at Pitt, said students often think of college as a place just for their academic and social lives, but tend to shy away from joining social justice groups like SJP. Richards said it’s important for students to speak up and stand up for human rights, especially for the Palestinian people.

“It really comes down to starting conversations on campus with all sorts of people no matter where they stand on the issue,” Richards said. “And now through social media, it’s easier than ever to have this conversation.”
Richards said he thinks it’s important for people to remember that forms of oppression are interconnected and the struggles of Palestinians should not be forgotten in the fight against oppression around the world.