The Pitt News • May 24, 2021 • https://pittnews.com/article/165547/sports/panthers-look-to-rediscover-early-season-magic-ahead-of-acc-tournament/

Panthers look to rediscover early-season magic ahead of ACC Tournament 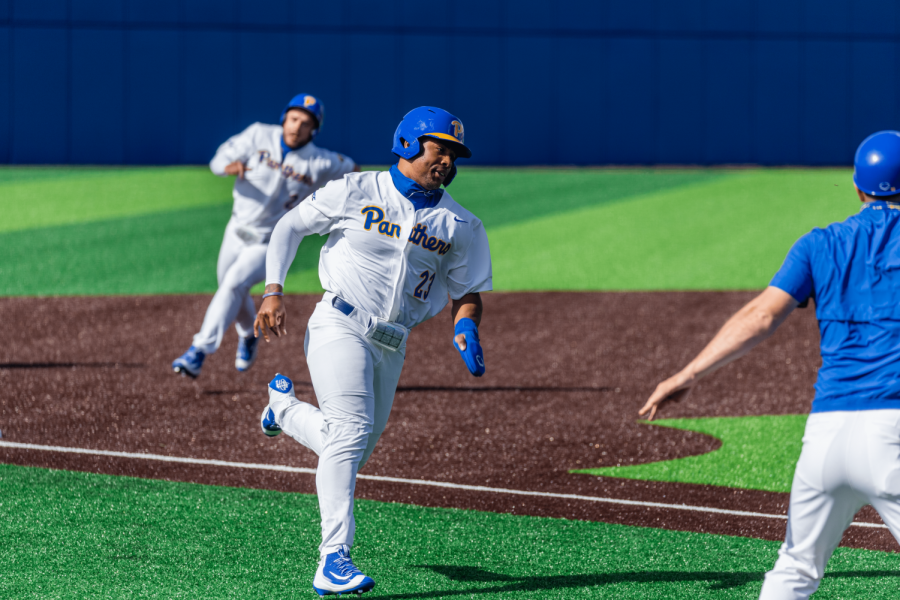 After a roller-coaster of a season, Pitt’s baseball program earned itself a spot in the ACC Tournament in Charlotte N.C. Pitt enters the tournament as the No. 10 seed, placed in Pool C along with the No. 3 NC State Wolfpack and the No. 6 North Carolina Tar Heels.

After a roller-coaster of a season, Pitt’s baseball program earned itself a spot in the ACC Tournament in Charlotte, North Carolina. Pitt enters the tournament as the No. 10 seed, placed in Pool C along with the No. 3 NC State Wolfpack and the No. 6 North Carolina Tar Heels. The tournament will kick off with pool play this Tuesday and conclude with the championship game taking place on Sunday.

The top 12 finishers in the ACC are separated into four separate pools of three teams. The team with the best record in each pool will advance to a single elimination tournament. A tie in pool play, each team having split their two games, will be decided by seeding — meaning the Panthers can’t afford a loss as the lowest seeded team in their pool.

Pool C features some familiar foes for the Panthers. Pitt and the Tar Heels faced off in mid-April, with the Panthers taking two of three in a series at home — including a doubleheader sweep. The Tar Heels had no answer for the stellar junior pitching duo of Mitch Myers and Matt Gilbertson as the pair held their opponents to just two runs apiece. But the pitching prowess of the doubleheader did not carry over to the final game of the series. Both teams found themselves in the midst of a slugfest, trading blow for blow, but the Panthers were unable to finish a ninth inning rally, falling 10-9.

Unlike the impressive performance against UNC, the Panthers are slightly over a week removed from being swept in a three game series, at home, by the Wolfpack — a series in which they were outscored 22-12. Although the Panthers were recently drubbed by the Wolfpack, this series was preceded by a historic season.

After being projected to finish last in their division, the Panthers went on an eye-opening run to start their season and were ranked in the top-25 of both major polls for the first time in eight years. Volunteer assistant coach Devin Mesoraco coined the team as “Gritsburgh” as a tribute to the team’s refusal to back down to the nation’s best, despite low expectations. Pitt was playing with an energy that jolted the Panther faithful and the college baseball world alike as the team started to turn heads with a memorable sweep over No. 9 Florida State and a series victory over No. 7 Georgia Tech.

The Panthers were in the driver’s seat and even spent some time atop the Coastal division, but this electrifying run seems to have hit a wall as of late.

After being dominated by the Wolfpack at home, the Panthers’ nine-week streak of being ranked in the top-25 of either D1Baseball or Baseball America’s rankings came to an end.

The drop in the national polls was not unwarranted.

Following the series victory against UNC, the Panthers were forced to remain stagnant for two weeks due to COVID-19 protocols. The Panthers were forced to watch idly as their opponents continued to build their resumé in the push for the College World Series. The once gritty and exciting team was now playing how many anticipated they would. The Panthers limped to a 2-8 record after the break in their schedule, including seven straight losses to conclude their regular season.

But the Panthers have no time to dwell on their anticlimactic end to the regular season as the postseason is now upon them.

Myers has been the Panthers’ ace all year long and it will certainly be interesting to see if head coach Mike Bell will decide to pitch him in the first game against the Tar Heels, in an effort to keep the Panthers’ chances alive, or save him for the higher-ranked Wolfpack. Bell does have the luxury of pitching Gilbertson in the game Myers doesn’t, and will certainly give Pitt a chance to win against any lineup.

Regardless of who pitches, the Panther bats can not afford to go silent this week. They will certainly have their hands full with whoever the Tar Heels and Wolfpack decide to send out to the bump.

The Panthers came off regular season play playing their worst baseball at the worst time and if they want to advance to the single-elimination round, the once No. 14 ranked team in the nation will need to rediscover some of that early-season “Gritsburgh” magic and pull off two upsets over two very strong lineups hailing from North Carolina.

Should the Panthers be able to put their cold streak to bed, the streaky squad could make a serious run at an ACC title.