The Pitt News • May 26, 2021 • https://pittnews.com/article/165603/featured/senate-council-passes-resolution-urging-vaccine-requirement-for-fall/ 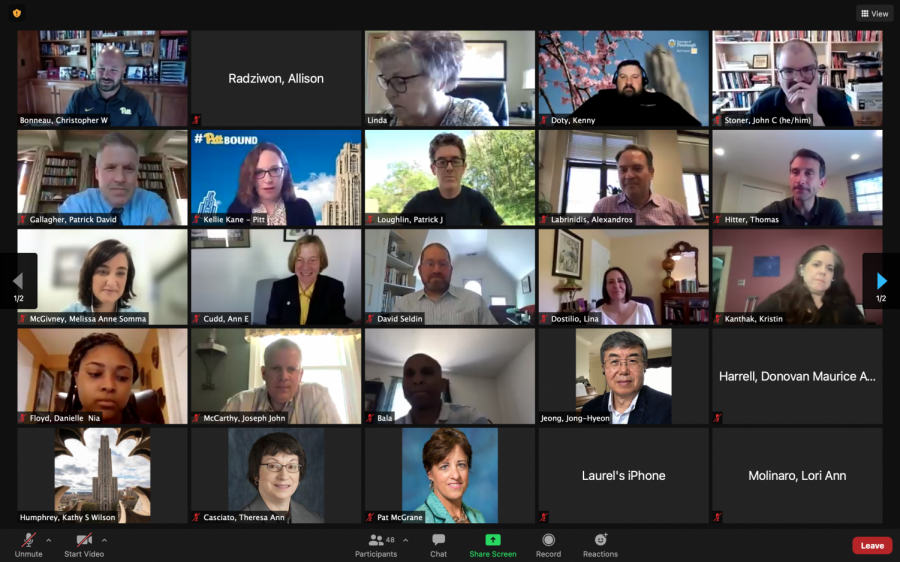 Senate Council held its monthly meeting last Thursday afternoon via Zoom, which was the final meeting of the 2020-21 academic year.

As universities across the nation make decisions on a possible COVID-19 vaccine requirement, Chancellor Patrick Gallagher said COVID-19 vaccination rates of Pitt students and faculty will affect the University’s planning for the fall semester.

According to Gallagher, vaccinations will eliminate a lot of the “complexities” of planning for the upcoming fall semester, since much of the population would be immune to COVID-19.

“Depending on the vaccination rates across the population, that will affect our planning for the fall and it may also matter whether you are vaccinated or not to see what requirements apply to you in the fall,” Gallagher said. “We’re still at an early stage with our health teams with defining what that could look like against a backdrop of changing information. So the short message now is if everyone gets a shot, this entire complexity goes away.”

Senate Council held its monthly meeting last Thursday afternoon via Zoom, which was the final meeting of the 2020-21 academic year. Much of the meeting focused on the possibility of requiring students to receive a COVID-19 vaccination to be on campus and participate in activities during the upcoming 2021-22 school year, such as in-person classes and other events, which was voted on during the meeting.

Senate Council members expressed concerns about requiring students and faculty to receive a COVID-19 vaccine. Engineering professor Patrick Loughlin said “banning people from campus” may cause issues, especially for unvaccinated faculty who have to be on campus to teach. According to Loughlin, Pitt should encourage people to get vaccinated rather than punish them for not getting the shot.

“I wish it was more about positive reinforcement rather than punitive or negative reinforcement,” Loughlin said. “I understand all the issues and balancing privacy versus public health, so I just encourage my colleagues and the administration to just consider to think of this more as incentivizing people rather than punishing people for not doing what a majority of us think they should do.”

Gallagher said the University hasn’t taken any stance on the proposal of requiring a vaccination. He said the decision that Pitt ultimately makes will be “centered around public health, not on trying to exclude people from our mission.”

“We want to give everyone the chance — we’re looking at some pretty exciting and fun, positive incentives that we really think will help drive folks to wanna do this,” Gallagher said. “The track record has been that people understand this not just protects themselves, but those around them.”

“We spent quite a bit of time at the Resilience Steering Committee yesterday talking about incentives and talking about different ways and brainstorming with students and staff and faculty,” Bonneau said. “So the incentive route and what could possibly work and how there are different incentives that would work better for different groups and so on is well under way.”

Morgan Pierce, a second year Ph.D student in the history department and student representative of Dietrich’s Graduate Council, said the Senate Council’s vote on a resolution to urge a vaccine requirement wouldn’t set any new policies on vaccine requirements into stone.

“It’s important to note that passing this does not create an official policy,” Pierce said. “It makes a statement about what this body believes should inform official policy.”

The vote passed with 79% in favor of mandating a COVID-19 vaccine.

The Senate also discussed Pitt’s transition from its current budget model to a responsibility-centered management model, which means individual schools would become in charge of both their own costs and revenue. The Senate Council voted on a resolution to encourage more community input during this transition.

Tyler Bickford, chair of the Senate’s budget policies committee, said “transparency and participation” are a priority with this new budget model. Bickford said this is an opportunity to “reinvest” in current budget committees rather than creating completely new ones.

The vote on the resolution passed with 86% in favor of including more community input during this transition.

The Senate also discussed the policies of the University Council on Graduate Study and Provost’s Advisory Committee on Undergraduate Programs, where the language was updated to accurately portray how both UCGS and PACUP “operate and the functions they serve,” according to John Stoner, co-chair of the Senate’s educational policies committee. Stoner said the policy updates for both organizations were to “bring them in alignment with one another,” as they both meet with the Provost to suggest new academic programs or revise current programs.

The vote on both the PACUP and UCGS language policies passed with 85% in favor.

During the meeting, Bonneau also reflected on his past three years as president, highlighting progress that the Senate has made in a short period of time, including the election of a new provost and the creation of the Pitt Success Program, a program to help lower-income students receive financial aid. Gallagher thanked Bonneau for his hard work.

“The past three years have been pretty busy on the shared governance front, even outside of COVID,” Bonneau said. “A lot of these things are COVID-unrelated. So when you add COVID into it, it’s been a busy three years.”