The Pitt News • May 28, 2021 • https://pittnews.com/article/165615/sports/gilbertsons-dazzling-pitching-performance-not-enough-as-panthers-fall-to-nc-state-3-2/ 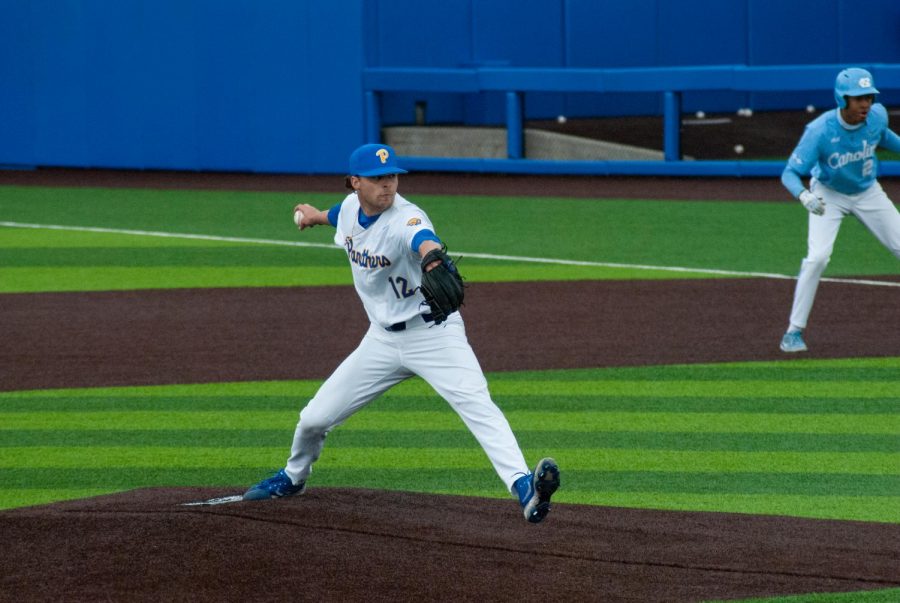 The Panthers were unable to capitalize on a phenomenal complete game performance from junior pitcher Matt Gilbertson, as the Panthers fell to NC State 3-2 — putting an end to their ACC Championship chase.

The No. 10 Panthers (23-20) fell to the No. 3 NC State Wolfpack (29-15) 3-2 at the ACC Baseball Tournament at Truist Field in Charlotte, North Carolina, putting an end to Pitt’s ACC Championship aspirations.

Pitt entered Thursday night’s contest having snapped a seven-game skid with a win over No. 6 North Carolina in their first game of postseason play on Tuesday. The Wolfpack, on the other hand, had their six-game winning streak come to a halt after dropping their final regular season contest to Florida State last Saturday.

The game’s first pitch finally came at 9:08 p.m. as Pitt junior pitcher Matt Gilbertson took the mound, making his 13th start of the season. Gilbertson would be looking to rebound after giving up eight earned runs in just over three innings of work in his last outing against Wake Forest. When asked if he had to make an adjustment for the late start, Gilbertson said it was business as usual.

“That doesn’t really affect you,” Gilbertson said. “A game like this, we were pretty locked in, pretty ready to go for it. This is as big of a game as we’ve had all year.”

The Panthers had the bats going early against NC State’s starting pitcher — junior Reid Johnston — as Pitt junior outfielder Ron Washington Jr. delivered the game’s first run on an RBI double. The liner to left field drove in sophomore infielder Sky Duff, after he had led off the inning with a single to center field. The RBI was Washington’s 29th of the season and 4th in two games of postseason play and gave Pitt a 1-0 lead after the opening frame.

But NC State quickly countered in the top of the second. Just as it seemed as though Gilbertson would get through another clean inning, junior infielder J.T. Jarrett delivered a two-out, two RBI triple. Gilbertson had worked the two previous batters to full counts, but eventually walked both, allowing the inning to continue.

Pitt head coach Mike Bell spoke highly about Jarrett after the game, saying that while he flies under the radar in a lineup littered with talent, he brings a lot to the table.

“He’s not the draft pick on the team like the first seven or eight guys in their lineup, but all he is is a winner,” Bell said. “Tip your hat to J.T.”

The Wolfpack then pulled away even further, making it a 3-1 game when Gilbertson lost control of a breaking ball and the pitch sailed to the backstop, allowing Jarrett to score from third on the wild pitch. After the game, Gilbertson said he felt off when pitching from the stretch and found that he was most effective employing the windup.

“Honestly, I was doing pretty well from the windup, the problems were coming from the stretch,” Gilbertson said. “I feel like when I’m in the windup, I can put the ball wherever I need to.”

Pitt threatened again in the top of the third inning after loading the bases following a pair of singles from Duff and senior outfielder Nico Popa, as well as a walk by sophomore outfielder Kyle Hess. Washington then drove in his second of the game on a fielder’s choice to third, cutting the Panthers’ deficit in half. But Pitt would leave two runners aboard in the third after senior infielder David Yanni struck out, allowing NC State to escape the frame still leading 3-2.

But in a game that started as a slugfest, the pitchers would then take over.

Both Gilbertson and Johnston were nothing short of dominant after the early offensive outbursts. The two starters would continue to put up dueling zeroes until Johnston was lifted going into the bottom of the ninth. Johnston went eight innings, surrendering just two runs while striking out 10 on 111 pitches. Gilbertson, on the other hand, finished the ninth inning at a gaudy 134 pitches, striking out the side in the top of the final frame to cap off a stellar 10-strikeout performance. Bell said while he tipped the cap to both pitching staffs, the teams as a whole put on an impressive performance as well.

“I appreciate both efforts out of both starting pitchers, but [also] both teams,” Bell said. “It was a beautiful game of baseball.”

Junior pitcher Evan Justice came in relief for NC State with Pitt needing a run to extend the game in the bottom of the ninth. Justice surrendered a walk to Yanni to lead off the inning, snapping a streak that saw 13 consecutive Panthers retired by Johnston. But the Panthers were unable to capitalize as Justice leaned on his electric fastball to close out the Panthers, ending their hopes of a deep ACC Championship run.

“We left it all out there and everybody gave it everything they could,” Gilbertson said. “And that’s all you can ask for.”

While Pitt’s chances at an ACC title may be gone, the Panthers will now shift their focus to the National Division I Baseball Tournament. The National Selection Show will take place on Monday with the Panthers hoping to hear their names called as one of the 64 teams selected to participate.

While uncertainty looms within the Pitt locker room, Bell has remained consistent with his message of focusing on the task at hand and letting the cards fall where they may.

“I told them I was proud of them for what they’ve done this year and we can only control what we can control.” Bell said. “We’ll head back, regroup, and we’ll let the dust settle from the weekend.”