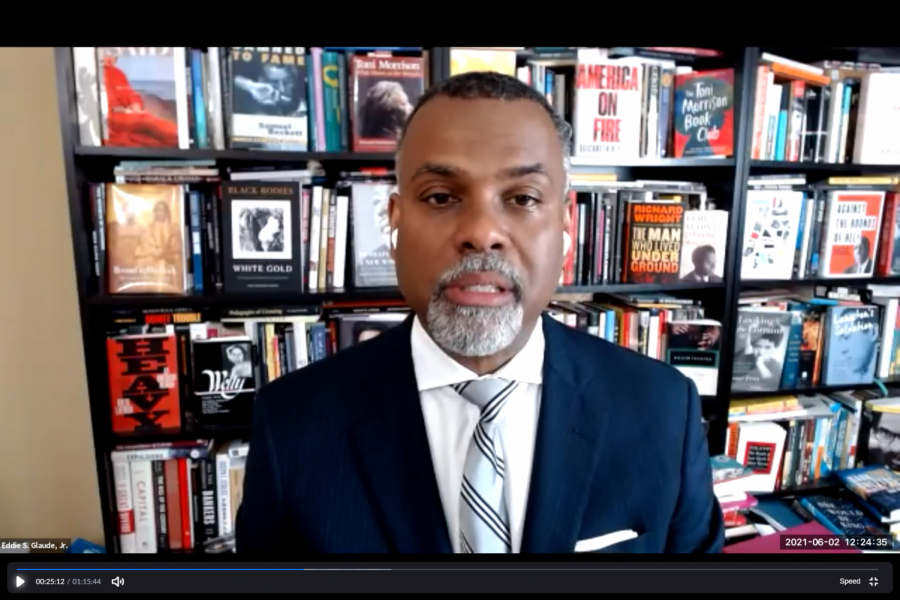 Eddie Glaude Jr. was the keynote speaker at a Wednesday event held by Pitt’s Center on Race and Social Problems in partnership with the African American Strategic Partnership.

According to Eddie Glaude Jr., professor and chair of Princeton University’s African American studies department, racial inequality isn’t the consequence of “random events,” and the nation should admit to its racist laws and decisions and be “deliberate” in rooting out such efforts.

“Racial inequality isn’t the result of random events, it’s the consequences of deliberate choices with accumulated benefit over time. Tell the truth, for such a time as this,” Glaude said. “The only way we’re going to remedy racial inequality in this country is to admit that we’ve created it and be just as deliberate in getting rid of it.”

Glaude was the keynote speaker at the Wednesday event, “For Such a Time as This: Acknowledging and Leveraging African American Resilience, Fortitude, and Vibrancy for Local and National Change.” The event is part of the speaker series run by Pitt’s Center on Race and Social Problems in partnership with the African American Strategic Partnership.

James Huguley, interim director of CRSP, began by acknowledging the hardships that Black people have faced and quoted Larry Davis, the recently passed CRSP founder and former dean of Pitt’s social work school, and said the event is to both celebrate work and acknowledge the reasons behind why we need to work.

Also at the event, CRSP and AASP named the awardees for the Larry E. Davis Excellence in Race Research award and the 2021 African American Strategic Partnership Equity Leadership award.

Glaude, a TIME magazine columnist and MSNBC contributor, as well as author of “Begin Again: James Baldwin’s America and Its Urgent Lessons for Our Own” and “Democracy in Black: How Race Still Enslaves the American Soul,” focused his remarks on the importance of truth and how it can help dismantle racist structures in American society.

Glaude said the U.S. should acknowledge its racism and racist past in order to properly enact justice.

“Our national stories reveal our character, and what we choose to leave out actually reveals the limits of our conceptions, of justice,” Glaude said. “To tell a more robust story or to reach for the truth sets the stage for more robust enactments of justice.”

Glaude listed “deliberate efforts” that discriminate against Black communities, such as the New Deal, the GI Bill, the housing market, adult labor market, residential segregation and segregated schools. Glaude said admitting that the actions of the U.S. are not perfect is simply telling the truth, not an attempt to disparage the country.

“This country has never been a beacon of virtue, it’s not an example of democracy achieved, nor is it the shining city of the hill, and to admit that is not to denigrate the power of this fragile experiment in democracy, it’s just simply to tell the truth,” Glaude said. “We tell ourselves these stories in order to protect ourselves from what we have done.”

“Here, we treat the issue of racial inequality as we do a pet project, and the people as objects of concern,” Glaude said. “And in those moments of crises like our own, we try to change it all at once and then when we tire of it all, we turn our attention elsewhere because it was never a constitutive value in the first place.”

Glaude said when the U.S. tries to “imagine itself differently, the country doubles down on its lies.” He explained when the 13th, 14th and 15th amendments passed after the Civil War, Jim Crow laws were passed in response, or during the second Reconstruction — between the end of World War II until the late 1960s — the tax revolt, Hard Hat Riots and elections of Richard Nixon and Ronald Reagan soon followed.

“We all know that this past year has completely changed the way the world views health equity from that unequal toll that we all know about and related to COVID-19 and Black Americans, Hispanic individuals and Native and Indigenous people here in our country, all the way to the final public outcry to call racism out as a public health issue,” Essien said.

Essien said he is “inspired” by the work he and his colleagues have done in the past year and   “hope[s] that work will continue on.”

Elliott said the Black Girls Equity Alliance was created to spread awareness and education about how Black children are disproportionately affected by the juvenile justice and child welfare systems.

Elliott said she accepted the award on behalf of the members and supporters of Gwen’s Girls and the Black Girls Equity Alliance, who have been “shining the light” on the truth that Pittsburgh is the “least liveable, least equitable city in the United States of America for Black women and girls.”

Glaude closed his remarks with a metaphor, and said Americans must be better midwives and save the nation from the umbilical cord of white supremacy that is wrapped around its neck.

“We must be better midwives, because every moment, every time a new America is about to be born, the umbilical cord of white supremacy is strapped around the baby’s neck, choking the life out of it,” Glaude said.