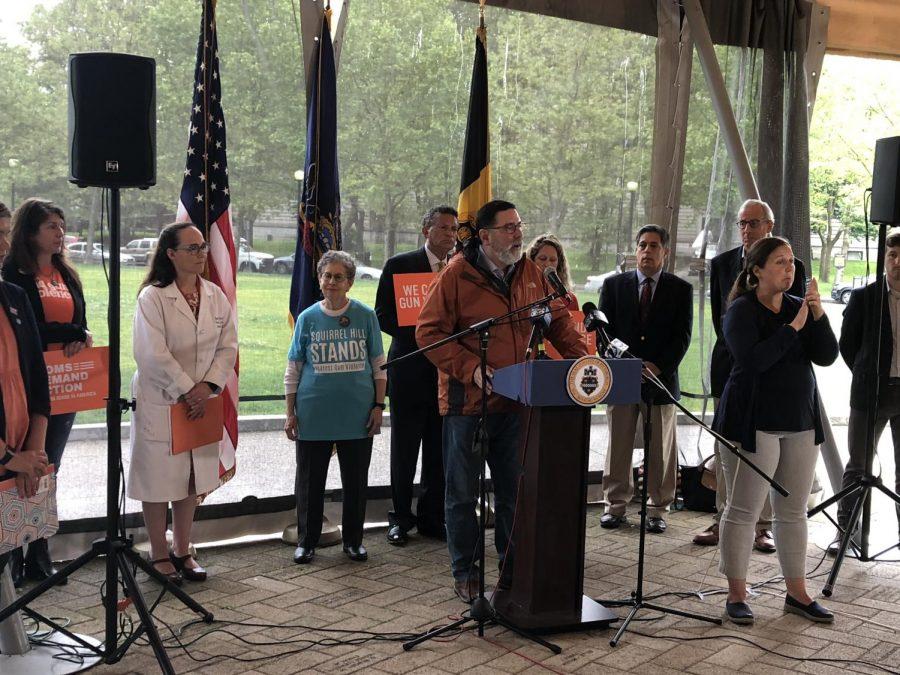 Since 2000, Richard Carrington has buried 209 people that he has known and have been killed due to gun violence. He will bury No. 210 next week — a cousin from nearby Homestead.

Carrington, the founder and executive director of the local nonprofit Voices Against Violence, invoked their memories in calling for gun control legislation to help stem the tide of deaths.

“The statistical information hasn’t changed. If the communities are to thrive … the 90 communities of this City are the backbone of this City,” Carrington said. “It affects everyone of color, creed, ethnicity and culture, and it is all of our responsibility to fight the good fight.”

Elected officials and community leaders such as Carrington, Moms Demand Action and others joined together Thursday afternoon at Oakland’s Schenley Plaza to call on the Republican-led General Assembly to pass gun control legislation. These measures include two sponsored by state Rep. Dan Frankel, D-23, who represents parts of Oakland and other East end neighborhoods, and would allow for local officials to regulate firearm usage. Current state law largely preempts, or blocks, local officials from regulating the use of firearms in their communities.

Frankel said the Republican-led legislature has “abdicated” its responsibility and as a result, “we continue along with guns on demand.” He noted the effects of gun violence in Pittsburgh, including the October 2018 massacre at the Tree of Life synagogue in the City’s Squirrel Hill neighborhood, the worst antisemitic attack in the nation’s history, where a shooter killed 11 Jews between the building’s three congregations.

“My legislation would simply allow communities to make their own rules around firearms, just as they do for fire prevention or traffic regulation. Those rules would be made by locally accountable officials … who know their communities best,” Frankel said.

Other elected officials — including City Council members Erika Strassburger and Corey O’Connor, who led the Council in passing three gun control bills in April 2019 — agreed that control over gun issues should reside with local officials, who know best the needs of their own communities.

Mayor Bill Peduto said Frankel’s legislation would allow for local officials to “do our job.”

“The most important job that an elected official has is to protect their constituents,” Peduto said. “But when that is taken away from us, by creating laws that preempt local municipalities from protecting their people, a right is being denied.”

State Sen. Jay Costa, D-43, said Democrats in the state House and Senate stand behind the Frankel legislation and believed it would pass if Republican leaders would allow a vote. He added that he believes the state Republican leadership “refuses to acknowledge” what is happening on the ground in Pennsylvania and is distracted by other issues.

“Instead of worrying about the validity of the elections across this country and across Pennsylvania, and travelling across the country trying to undermine the democracy that took place here in our commonwealth and our country, we should be looking at these measures which impact the quality of life of individuals, but more importantly, impact our communities as well,” Costa, the minority leader, said.

Frankel urged that if the legislature does not “look at the evidence and act to protect the public when it comes to firearm legislation,” it needs to “get out of the way” and allow local officials to make their own rules.

“The reality here is that Pennsylvanians are dying, communities are suffering and we can do something about it,” Frankel said.