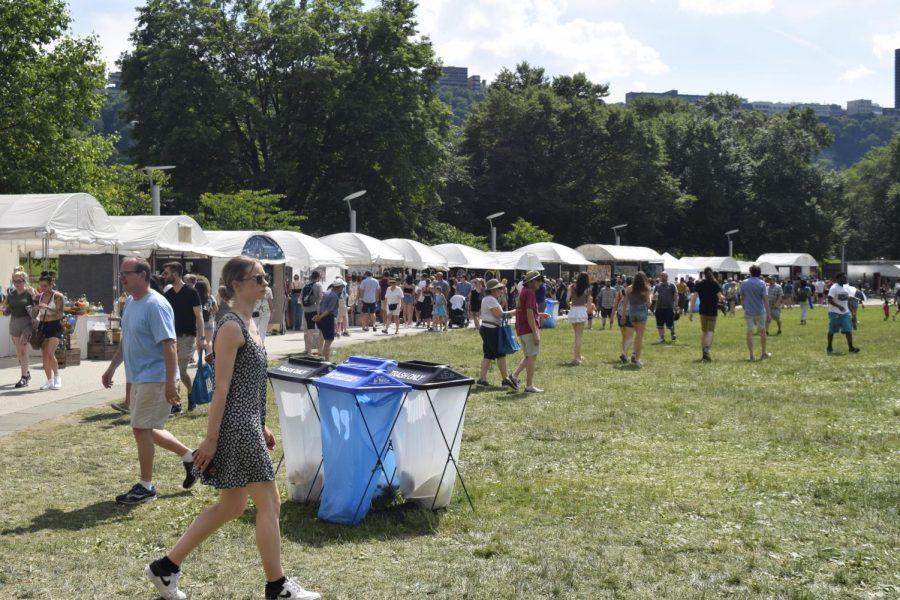 The Three Rivers Arts Festival returns for in-person activities spanning across the entire Cultural District this year, with art and food vendors at Point State Park.

By Jessica McKenzie, For The Pitt News

Pittsburghers following the sound of live music booming from the speakers along Ft. Duquesne Boulevard will find that Pittsburgh’s local art scene has come back to life this summer for one of the first large events since the start of the COVID-19 pandemic. The Dollar Bank Three Rivers Arts Festival spans the entire Cultural District this year, in addition to having art and food vendors at Point State Park.

Festival director Sarah Aziz said she is thrilled that the festival had a large turn out this past weekend.

“It’s hard to have the words to describe the journey we’ve had making this festival happen this year,” Aziz said. “If I think about where we were last year compared to now, I feel like I’m coming home — it’s comfortable, welcoming and right.”

The Pittsburgh Cultural Trust has returned with the Three Rivers Arts Festival for both in-person and virtual activity, offering 10 days of free art displays and live music. The festival is taking place from June 4-13, from 12 to 8 p.m., as well as in Point State Park on Fridays, Saturdays and Sundays during the same time slot.

Though no COVID-19 social distancing rules — including mask usage — have been strictly enforced for festival attendees, guests are encouraged to follow the CDC’s Large Gathering Guidelines. According to the Pittsburgh Cultural Trust Guest Pledge, all staff, crew and volunteers are required to wear masks to the festival, regardless of vaccination status.

Aziz said while preparing for the festival, there were multiple social distancing measures put in place that didn’t end up needing to be used, one of which was a gate entry ticketing system that would limit the amount of guests allowed in the festival.

“Guidelines have changed so drastically, and most recently for the better,” Aziz said. “Some people aren’t quite ready to get back to normal and some people are so ready — we’re trying to keep up and balance what everyone is comfortable with.”

The overwhelming majority of festival guests enjoyed the art, food and live music of the festival without masks and social distancing this past weekend. Trevor Walker, a Philadelphia resident who attended the festival, said it felt exhilarating to get back to normal summer activity in Pittsburgh after spending the entire year working virtually.

“I came to this festival back in 2019 and loved it, so it’s a wonderful feeling to get back to that same energy and vibe — I don’t take that for granted anymore,” Walker said. “The fact that we can be more relaxed is a foreign feeling, but it also feels very welcoming.”

Originally from Squirrel Hill, Walker is a recent graduate of Drexel University. He came to the festival with some friends before taking part in the Pittsburgh Pride Revolution march. The march attracted a large crowd to the artist market in Point State Park. Walker said he thought that the Pride march and Three Rivers festival were a perfect combination.

“This feels like a celebration of love and life,” Walker said. “After everything that we’ve been through as a community with the pandemic, it’s a cherished feeling.”

For those not yet comfortable with returning to large, unmasked crowds, Three Rivers is continuing the virtual element of the festival that was developed last year in the place of an in-person festival. According to Aziz, there is a virtual artist market offered this year, along with an element called the 24/7 Stage where people can enjoy music videos at any time of the day.

“2020 definitely had some silver linings — everyone learned a lot in 2020 in terms of personal growth and things like that, but also in concrete, practical ways,” Aziz said. “Before 2020, the Trust didn’t have virtual programming, so the pandemic gave us the opportunity to learn how to do that and we really upped our game.”

More than 200 artists chose to be a part of the virtual artist market instead of partaking in person, according to Aziz. On the other hand, 157 artists are displaying and selling their work on-site between the Cultural District and Point State Park over the 10 days of the festival. The art includes jewelry, wood carvings, ceramics, paintings, photography and more.

Among the artists in Point State Park is Jesse Kunerth, who sells pop art through his company, Dose Creative. Originally from Orlando, Florida, Kunerth said he is used to participating in in-person art shows due to Florida’s more relaxed guidelines during the pandemic.

But since he has friends in Pittsburgh who have struggled to sell their art during the pandemic, he said he is glad to be back in a vibrant artistic environment like Three Rivers.

“It’s just amazing to see everyone out again in Pittsburgh this summer,” Kunerth said. “I feel really fortunate, because I know there are some artists out there who haven’t been able to participate in shows for a year and a half — everyone’s happy, and I’m happy for them.”

Kunerth has sold his work for four years at the festival and has been making pop art for 15 years. He said the inspiration for his art comes from his love of music and travel. The pieces in Kunerth’s tent were bold, primary-colored posters of famous musicians and other public figures, along with some pets and exotic animals.

“The goal is to tell a story with my art,” Kunerth said. “I like to combine my passion for music and art and ultimately capture something special.”

Though the Trust was unable to feature as many artists in person this year compared to years past, the festival still maintained an extremely diverse selection of art to display. Aziz said something she is most proud of this year is the fact that festival guests can walk through and see “a little bit of everything.”

“I love being able to showcase these artists that are in various stages of their career,” Aziz said. “[Younger artists] are just incredible, inspirational and really chasing it. [Artists] who are on the other end of the spectrum are just making gorgeous art, being awesome and supportive.”

Aziz celebrated her sixth anniversary as festival director this past weekend. She said she is most grateful that Three Rivers was able to retain funding for this event, as many sponsors have dropped festivals due to financial struggle during the pandemic.

“I think this festival is something the community really needed this year,” Aziz said. “We wouldn’t have been able to do it without our sponsors, but of course, we’re thankful to the city of Pittsburgh for coming out and creating this great environment.”