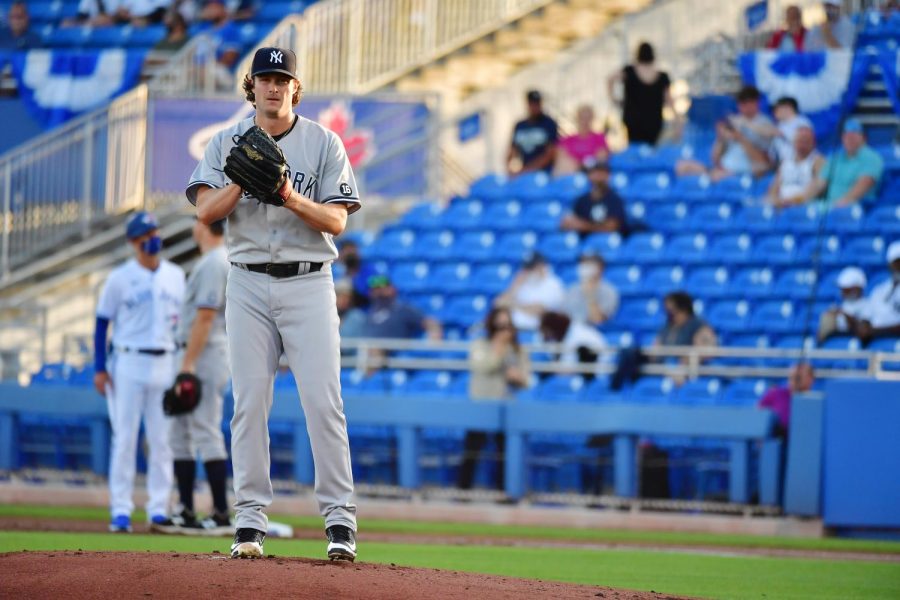 The MLB’s passive nature regarding defending and ensuring the integrity of the game has set themselves up to be marred by scandals. Pictured is New York Yankees pitcher Gerrit Cole.

At a press conference last week before a series against the Minnesota Twins, New York Yankees starting pitcher Gerrit Cole was asked about a growing sentiment that there may be large-scale usage of foreign substances amongst Major League Baseball pitchers to enhance their grip on the baseball and in turn make their pitches spin faster and move more drastically. Cole took a long pause before providing an answer that seemingly implicated himself and many of the other pitchers around the league.

“I don’t quite know how to answer that, to be honest,” Cole said.

MLB’s administrative incompetence was put on display for the entire sports world during the infamous “Steroid Era” in the 1990s and early 2000s. After being embarrassed and having the game’s integrity be put into question in past scandals, most would assume the league had learned its lesson and would be more willing to address issues that harmed the game’s honor.

But the last few weeks and months have proved otherwise. Instead, MLB and their lackluster commissioner are once again struggling to defend their own rulebook.

The controversy surrounding competitive fairness in baseball was reversed last year. There was a mounting belief that the MLB was “juicing” baseballs in an effort to increase home runs and hard-hit balls. In other words, more marketable plays.

Since this scandal faded, batting averages have plummeted while pitch spin rates and strikeouts are at all-time highs. And, much like Cole, MLB doesn’t quite know how to answer that.

MLB’s newest headache has been ongoing for the past several months and there has yet to be any sort of enforcement besides a memo sent to all 30 clubs detailing how the league  was stepping up its enforcement of the rules against said foreign substances, specifically those designed to give an edge to pitchers. But why — since the rule is already in place — is a warning as far as the commissioner’s office will go?

To put it quite simply, the league likely doesn’t want to catch anyone.

Since his assumption of the commissioner’s office in 2015, Rob Manfred has been nothing short of a disaster for the game of baseball. From needless rule changes to degrading the sport’s championship trophy (which is ironically named for his title), Manfred has stumbled at nearly every step of his time as commissioner.

Faced with yet another scandal, Manfred is once again choosing to sweep the issue under the rug rather than facing it head-on — a management tactic that has plagued baseball for decades.

Unfortunately, this passive approach is exactly why baseball continues to be faced with these problems — players know they can get away with bending the rules, so they go ahead and take the measures to have any advantage possible.

And who can blame them?

If Manfred and Major League Baseball as a whole cared about upholding the rules of the game, there would be penalties — suspensions, and large-scale sanctions.

None of this is happening — just a strongly worded letter.

If this approach continues, this will be far from the final time this conversation is had. Players are always looking to gain an advantage over the ever-growing talent pool in professional baseball. If that means toeing the line of the rulebook without having to worry about league discipline, so be it.

While not confirmed yet by the league itself, multiple sources have stated that MLB plans to suspend any violators of Rule 3.01 or 6.02(c) — which prohibits pitchers from applying foreign substances such as pine tar or spider tack — for 10 days.

This, quite frankly, isn’t good enough.

Major League Baseball should do one of two things. One, they remove the ban on so-called “sticky stuff” and allow pitchers to use whatever they want to help with grip and spin rates. This way, at least everyone is on a level playing field and there is no inherent advantage for those who decide to use it. The alternative is enforcing the rule strictly.

Cycling faced a similar — albeit much more extensive and long-term — problem with artificial performance enhancement in the late 1990s and early 2000s where the International Cycling Union turned a blind eye to widespread doping among cyclists. The outbreak started amongst a small circle of a few cyclists, but since the ICU failed to act, others felt the need to dope as well in order to remain competitive.

Over half a decade of cycling has been tarnished and eradicated from the history books.

This is the same situation baseball faces if they continue a nonchalant outlook towards foreign substances.

When taking all of this into consideration, it’s vital to remember that sports are a job for professional athletes. They put food on the table for their families. And while leagues prop up their millionaire superstars, there are plenty of fringe players who are truly playing to make a living.

When you give someone like this the choice between breaking the rules or losing their source of income, it’s an easy decision. A pitcher hoping to make his mark will do everything he can to hang around the big leagues.

Either allow it or don’t. Indifference is not an option.