‘All you have to do is reach out’: Getting involved in Pitt’s student organizations 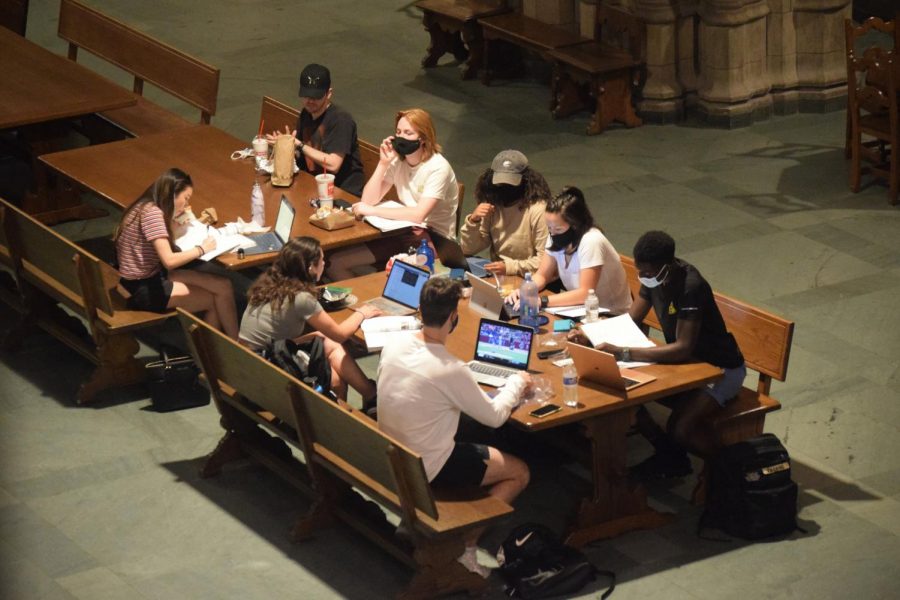 Alyssa Machi’s advice for incoming students to become involved at Pitt is simple — “reach out.”

“[Clubs] want you to join … they want you to be a part of their club,” Machi, a sophomore communication rhetoric and public and professional writing double major, said. “All you have to do is reach out and say, like, ‘Hi, I’m thinking about joining this club. Can I come to a meeting?’”

With nearly 700 student organizations, Pitt features clubs that serve a variety of interests, from writing letters as random acts of kindness to visiting immigrant-owned restaurants around Pittsburgh. Greek life organizations, academically focused groups and clubs to promote more niche interests all have a space on campus.

While reaching out to clubs sounds intimidating, Machi said that’s exactly how she became involved with [email protected], a student organization dedicated to training and educating service dogs.

“I really loved dogs, and I would see these dogs in yellow and blue vests walking around campus,” Machi said. “Because I’m one of those people that asks to pet your dog, [the raiser] eventually was like, ‘Hey, I’ve started recognizing you.’ And she gave me the information for the organization.”

Machi said contacting [email protected] was the first email she had sent from her Pitt account, and while it was “scary” to press send, that’s how she became involved in the club.

Getting involved at Pitt means something different for every student, but one popular event is the Activities Fair, which had more than 3,000 in-person attendees in August 2019 and 2,200 attendees during its virtual version in August 2020, according to Student Affairs spokesperson Janine Fisher. She said the fall Activities Fair occurs during Welcome Week, typically in the Petersen Events Center.

Before the COVID-19 pandemic, Pitt’s student organizations lined up throughout the Pete to promote their club. Members talked to students and often gave out free swag — buttons, stickers, T-shirts and even fanny packs — to urge students to join their organization.

Due to the COVID-19 pandemic, the Student Organization Resource Center held the Activities Fair virtually on Zoom last year, where 424 student organizations hosted their own Zoom rooms for interested students to drop by, learn more and join if they desired.

Fisher said the fair gives students — both new and returning — an opportunity to engage with representatives from student organizations and University departments to explore outside of the classroom involvement opportunities on campus.

Somya Thakur, a sophomore business information systems and marketing major, went to the fair to learn more about Association for India’s Development — Pittsburgh. She eventually became a freshman chair last September, which she said helped her meet many upperclassmen who she could talk to and get advice from.

“These clubs kind of cultivated my friend groups, and now we have all been hanging out this entire summer in person,” Thakur said. “I feel like I’ve found a group of people that I’m so excited to make memories with next year.”

Thakur said she was interested in joining one of Pitt’s many cultural clubs.

“My high school was mostly white, so I wanted to get in touch with my [South Asian] side. I tried out for the classical dance team, Pitt Nrityamala,” Thakur said. “It was the best thing I could have done because we had practices every Tuesday, Thursday and Sunday. And because I stayed home, it was a way I could make friends.”

Thakur joined additional clubs and said students should “join as many things as you can.”

“That’s what everyone says, and I was like, ‘Screw it, I’ll just join whatever I can do, as much as I can,’” Thakur said. “I think that really helped me. I don’t have one singular group of friends — it’s important to get a mix. And I’m still planning on joining a bunch of new clubs next year.”

Fisher said Pitt is currently exploring options for both in-person and virtual experiences for the Activities Fair organized by SORC. Beyond clubs, students have the opportunity to join various other programs in the Division of Student Affairs, including the Student Office of Sustainability, Fraternity and Sorority Life and intramural sports.

Ryn Treese, a junior neuroscience major, remembers joining Pitt Rainbow Alliance during pre-COVID days in their first-year. Now its office administrator, Treese said they chose to stay at the organization due to its “fun, welcoming environment.” They said students shouldn’t be afraid to leave a club if they do not enjoy it.

“I try as many things as possible, and if you don’t like something, you don’t have to go back. Nobody’s going to get mad,” Treese said.

Treese said they reached out and gained support from the upperclassmen to become involved.

“Our communications director, Laura, helped me have the confidence to get more involved in the spring and this coming year,” Treese said.

While intimidating at first, joining and finding one’s place in clubs isn’t difficult, according to Machi, even when her first Activities Fair was virtual.

“I personally was too shy to go into all of the Zoom rooms that all of the organizations had,” Machi said. “But I was on the website where the fair was scheduled and saw the 600-plus list of organizations. And I just went through the list, wrote down all the things I wanted to do and sent emails out.”