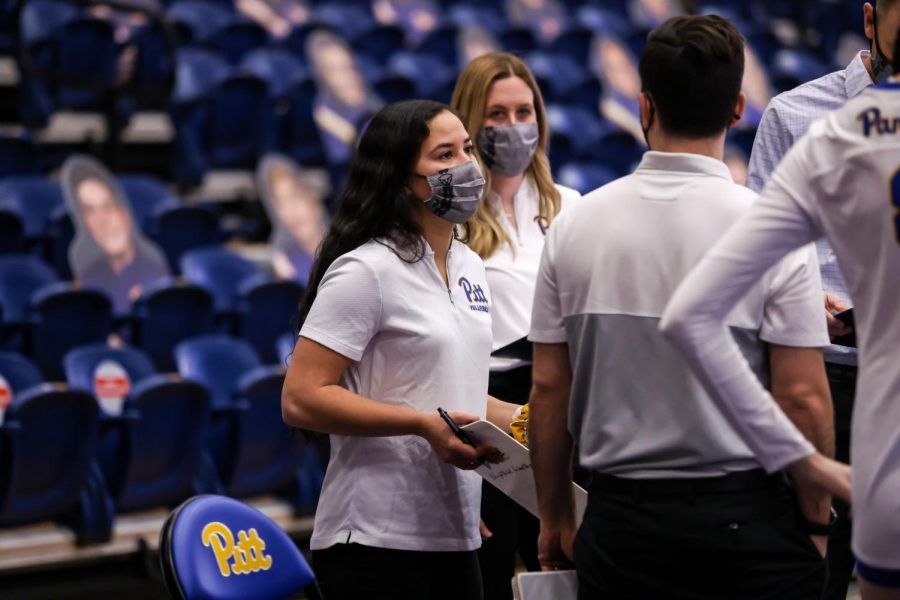 Kamalani Akeo joined middling Pitt volleyball as a walk-on and left it as a two-time conference champion with three wins in the NCAA Tournament. In her post-playing days, she looks to push program limits even further.

Kamalani Akeo arrived at Pitt in 2015 — as a walk-on — and joined a Panthers volleyball program that, under a second-year head coach, had struggled to find its footing in a new conference and hadn’t made a NCAA Tournament in more than a decade.

She left the program a two-time conference champion, with three wins in the national tournament under her belt and her name etched in stone under the shadow of the Cathedral of Learning on Pitt’s Varsity Walk.

“To be perfectly honest, when I was signing my letter of intent, I didn’t think that we were going to be as successful as we were,” Akeo said. “And I don’t think anyone would have thought the same thing … I don’t think even [head] coach [Dan] Fisher thought this program was going to see so much success in such a short amount of time.”

But Akeo’s tenure at Pitt didn’t end with her playing days. After she finished kickstarting the most successful era in Panthers volleyball history, she returned to Oakland this January as a volunteer assistant coach. Alongside head coach Dan Fisher, Akeo pushed program limits even further — helping the Panthers reach the Elite Eight this spring.

Now one of the most decorated players in school history is making her homecoming permanent. Fisher announced on May 24 that he was promoting Akeo to director of operations for Pitt volleyball, following the departure of Peter Manguiat, who previously held the role for slightly more than a year. She is one of the lasting pieces of the teams that built Pitt volleyball into what it is today, bridging two halves of an era of excellence.

Akeo was in the middle of her second professional season in Slovenia when the COVID-19 pandemic hit. The difficulties of her time abroad, compounded by a pandemic, made the former Panther think more seriously about returning stateside and beginning her career on the sidelines.

It was a path that Akeo said she always knew she wanted to take. Before her time as a player was over, she initiated conversations with Fisher about how to get into coaching. He didn’t expect that her first gig would come at Pitt, but when a volunteer position opened up, it was an obvious match. At the end of her season last November, Fisher called and told Akeo that if she wanted it, the position was hers.

“The conversation started when she was playing for me,” Fisher said. “She had expressed to me, as an undergrad, that it was something she was interested in when her playing career was over … The timing kind of worked out with the COVID pandemic and her pro season so that she was able to come back in January.”

As a volunteer assistant coach, Akeo — a former ACC Setter of the Year who ranks third all time in career assists for Pitt — worked primarily with the Panther setters. Akeo said she dissected video and tracked data on the successes and failures of specific plays, on top of developing winning strategies that produced results on the floor.

In her new role, Akeo will further explore the ins and outs of running a volleyball program and add more responsibility to her plate. As director of operations she will oversee scheduling practices and games as well as equipment needs. But above all else, she’ll be the head coach’s “right hand person,” according to Fisher.

He gushed about Akeo and laughed in seeming amazement while reminiscing about her time as a Panther.

“I want to not underrate what a great human she is and what an overachiever [she is],” Fisher said. “She came to this program … as a walk-on and now her name’s on the Varsity Walk … She helped build this program.”

As a member of one of his first recruiting classes, Fisher and Akeo have a deep connection. They trust each other and Akeo’s knowledge of the program, built through her own experience as a player, was a major factor in her hiring and promotion, Fisher said.

She played alongside and led some of the current team’s veterans while the program was trying to break through on conference and national stages. Alongside returning senior stars Kayla Lund and Chinaza Ndee, Akeo represents the convergence of two generations of historically great Pitt volleyball players.

“We struggled together, we succeeded together,” Akeo said. “Being able to see them reach these goals that this program had been shooting for is amazing. And to see how they’ve grown as players and people, it’s been really gratifying.”

There are the older — a relative term, given the short lifespan of college athletic careers — players in Ndee, Lund, Sabrina Starks, Zoi Faki and Kylee Levers, who all shared the floor with Akeo as teammates and now reap the benefits of her coaching. Then there’s the young talent — sophomore Chiamaka Nwokolo, redshirt first-year Valeria Vazquez Gomez and Akeo’s younger sister, Lexis, also a sophomore, who is the spitting image of Kamalani.

The Akeo sisters are similar players — creative passers who play with intelligence and thrive off of their knowledge of scheme and positioning. Their four-year age gap means that the two sisters narrowly missed playing with each other, but Kamalani said coaching her little sister is familiar, even before taking a job at Pitt.

At home, the oldest Akeo sister, Lesli — who was a standout volleyball player herself at Siena College in Loudonville, New York — works together with Kamalani, offering whatever insight their combined knowledge can muster to help make Lexis the best player possible.

“When [Lesli] came back home [after college], she coached me in club when I was younger and even helped coach me in high school,” Lexis said. “It’s been a whole volleyball tradition with us three girls and I’m glad that I was able to follow Kamalani … and continue that tradition with her.”

Sometimes their relationship as sisters can add some stressors to the job of coaching. When Lexis plays, Kamalani’s emotions are heightened. The joy of success reaches higher peaks and the sting of mistakes drops to lower valleys.

“It wasn’t a horrible thing, but it was a little bit of a struggle because I did feel more emotionally attached to her,” Akeo said. “So if she made errors … it hurts a little bit more inside. But the opposite too, if she did something really good, I’m super proud.”

But after reaching the Elite Eight this year, a feat no Pitt team had ever accomplished, the two siblings were able to revel in their shared glory, a kind of ecstasy that they both agree was multiplied by their tight bond.

As Akeo continues to help the Panthers reach never-before-seen success, she imprints herself further into the lore of a program she had a heavy hand in building and a City that, despite being thousands of miles from her childhood home, has become a new home for the self-described “adventurous spirit.”

“Pittsburgh, the City, was actually a really nice change,” Akeo said. “I knew that I was getting myself into something different, especially with winters, but I’ve come to be okay with it. I still freeze … but I do love the City … I’ve made a lot of connections here, so that was another reason why it was like, ‘Why wouldn’t I come back?’”