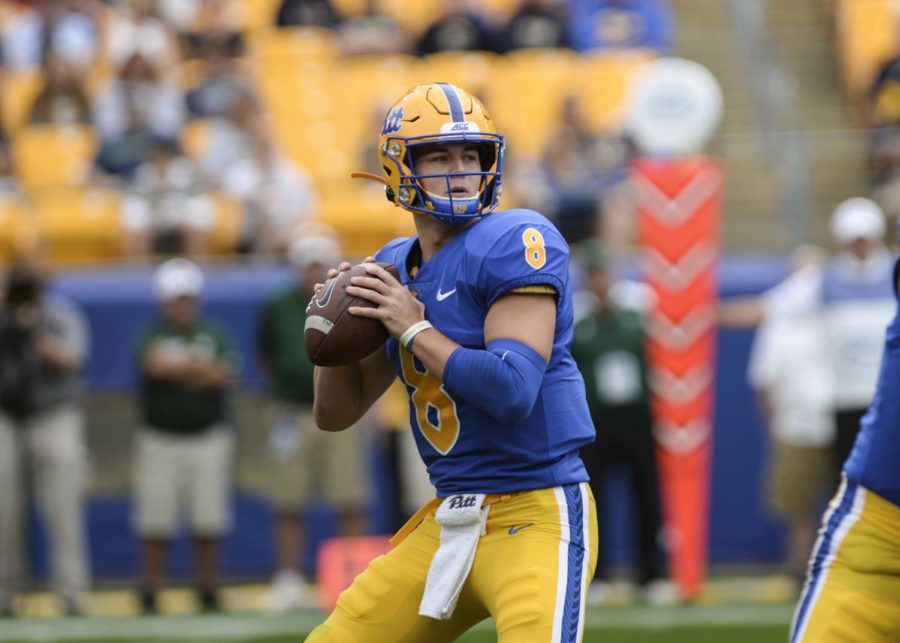 Quarterback Kenny Pickett could have left for the NFL Draft, but after falling in love with Pittsburgh, he opted to spend another year in the Steel City.

Head football coach Pat Narduzzi was preparing to lead an exhausted 4-7 Pitt team into a seemingly meaningless contest against the No. 2 Miami Hurricanes in November 2017. Pitt fans didn’t have much to be excited about after another season of mediocrity and a campaign that would conclude without a trip to a bowl game.

Narduzzi had been acting as the operator to a quarterback carousel with Ben DiNucci and Max Browne all season long, unable to find the stability he needed to win consistently. But ahead of the matchup against the highly ranked Hurricanes, Narduzzi decided to change things up, sending then-first-year quarterback Kenny Pickett under center for his first career start in the season finale.

In a game that will go down in Pitt football history, Pickett led the Panthers to a 24-14 upset win. The Panthers spoiled one of the most storied college football programs in the nation’s run at a national title after Pickett accounted for all three Panther touchdowns in the game — including the game winner.

After scrambling for 22 yards and diving for the front pylon, Pickett secured a Pitt victory. The Panther Pitt erupted as Pickett’s teammates swarmed him in the end zone and, for the first time in what seemed like years, Pitt fans had something to be excited about — their quarterback of the future had arrived.

Pickett, a native of the Jersey Shore, decided to trade in the sandy shores for the bridges and hills of Pittsburgh, nearly six hours west of the Garden State. The physical differences were obvious, but what stuck out to the quarterback most were the people of Pittsburgh. Although Pickett was initially wary of spending his next four years in an urban area, he quickly realized Pittsburgh and the people who lived there were unlike any other city.

After four years, 21 victories as a starter, 8,552 yards in total offense and a couple of unforgettable upset victories against some of the nation’s best programs, Pickett isn’t ready to call another city home just yet.

Pickett was eligible to enter the NFL Draft following the 2020 season and many believed he would. Pickett possesses many of the tools NFL scouts look for. He can move the chains with his legs and his arm — a prime example of the new wave of “dual threat” prospects professional teams now covet. He also participated in the program’s Senior Day festivities — giving the impression this would be the last time the Panther faithful saw Pickett don the blue and gold on the North Shore at Heinz Field.

To the surprise, and delight, of Pitt fans, Pickett announced via his personal Instagram account in December that he would be returning for another year. The caption of his post was direct and to the point — “One more year. #H2P.”

It wasn’t just the fans who were elated to hear the news. Even Pitt Athletic Director Heather Lyke jumped on the bandwagon as she too expressed her excitement at the news that Pickett would be returning.

“Kenny Pickett coming back at quarterback is a real plus,” Lyke said at a May media availability. “For the leadership, for his personality … We have great expectations for that program.”

Once the news had spread throughout the team, it seemed the entire program had been electrified. On National Signing Day, more than a week after Pickett’s announcement, wide receivers coach Chris Beatty said he was pleased his receivers would be catching passes from Pickett for another year.

The decision to return unsurprisingly didn’t come easily to Pickett. The thought of hearing the commissioner call your name, signing an NFL deal and playing in front of sold-out professional stadiums is certainly a difficult scenario for any college athlete to pass on. But after consulting many people — including his parents, coaches, teammates and sources inside the NFL — he decided another year in the Steel City was the best option for him and his career.

“Up until [the day of] I really wasn’t sure,” Pickett said. “I was probably 50-50 the entire way. I told myself no matter what decision I made I was going to be 100% … at the end of the day, after talking with my parents, I really just wanted to come back for one more year and improve my game and my draft stock … I’ve been all in since I made that decision.”

A year after making his impeccable first impression in the Miami game, Pickett started all 14 games and led the Panthers to the program’s first ACC Coastal Division title and a trip to the ACC Title game against the juggernaut Clemson Tigers — a game the Panthers would lose 42-10. It wasn’t the result the team had wanted, but it was the first step towards returning to the elite stratosphere of college football programs — a year Pickett used to learn and grow.

“That was a year of learning,” Pickett said. “We won the Coastal, which obviously [hadn’t] been done here before, we got to play in the ACC Championship Game. I got a lot of experience and went through a lot of adversity … it really helped me get mentally stronger for the back half of my career.”

Pickett’s mental toughness was certainly put to the test last season. The entire Pitt athletics program was put under a microscope during the COVID-19 pandemic. Pitt required all players and coaches to follow the same guidelines students had to follow, meaning the people the players could see were severely limited and the team was forced to play without fans in the crowd.

But one of the hardest parts of last season, for Pickett, was being forced to sit out of two of the Panthers’ biggest games of the season against No. 13 Miami and No. 3 Notre Dame. Pickett injured his ankle in a contest against Boston College — an injury, according to Pickett, that required surgery. The Panthers would go on to lose the two contests by a combined score of 76-22.

“Watching those games was really tough,” Pickett said. “The goal is to stay healthy throughout all of these games and help the team win.”

But fortunately, one thing Pitt football has never lacked, according to Pickett, is toughness.

“Toughness is what separated us back in the day and I think it’ll separate us this year,” Pickett said. “We have some tough players that play with a lot of tenacity and guys that want to get after it.”

Pickett has proven time and time again that he is a Swiss Army knife under center and the ultimate competitor — he can do it all. The Jersey native sits third all-time in total offensive yards, just 2,956 yards away from being the all-time leader, and has the most rushing touchdowns as a quarterback since 1977-80.

This dual-threat ability Pickett possesses has led many to believe that he could climb up NFL draft boards, just as 2020 first overall pick quarterback Joe Burrow and 2021 second overall pick quarterback Zack Wilson did after taking the college football world by storm in their final years of college football. But according to Pickett, this won’t change the way he plays his game — the goal is, and always has been, to win a championship as a Panther.

“If we’re successful as a team, [my draft stock] will take care of itself,” Pickett said. “Burrow did it. Wilson did it. Obviously I have guys that I’m chasing, they kind of set the standard before me. But I think we have a really good team, we just have to put it all together and everything else will take care of itself. I’m just excited for September 4 against UMass and we’ll get this thing goin’ … I would love to bring a championship back to this City and back to this school.”