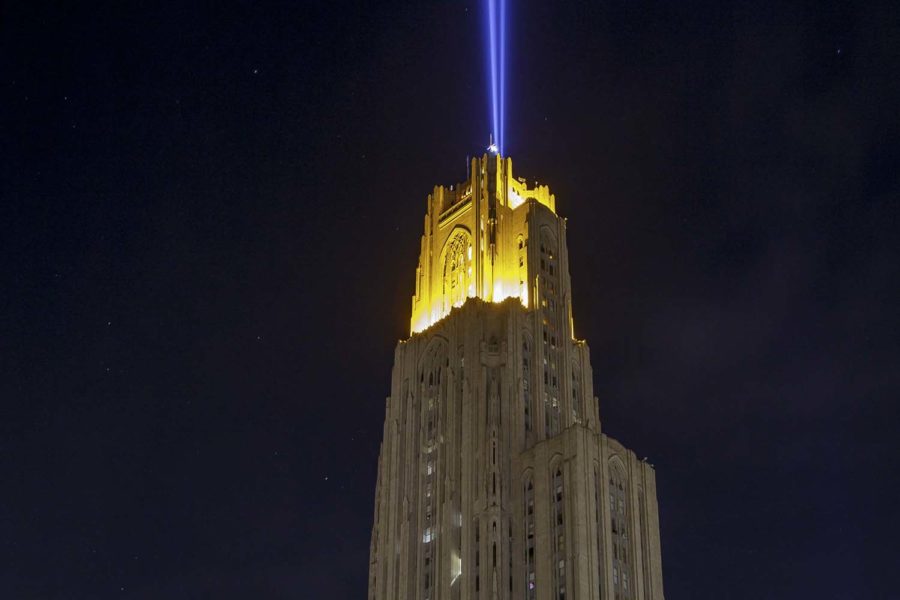 Students have plenty of opportunities to enjoy joining the exciting culture that comes with being a Pitt fan.

Pitt fans from all over come together every season to carry on tradition and Hail to Pitt. The University has one of the most storied teams in college football history and boasts a variety of traditions surrounding the program — both old and new.

Good old “Sweet Caroline” is probably the first thing you think of when talking about Pitt football traditions. With a goal of improving the Pitt fan experience at Heinz Field, in 2008, Pitt student groups and Pitt football’s director of ticket marketing came up with the idea to sing Neil Diamond’s song “Sweet Caroline” between the third and fourth quarter of every home football game.

On any given gameday, rain or shine, the “regulars” of Pitt tailgating line the gold lots to eat some food, drink some drinks and get ready for the game.

For the marquee matchups such as games against Miami and Clemson, fans will pack the parking lots at Heinz Field hours before the game to cook food, toss around a football, play cornhole and enjoy the atmosphere of packed parking lots prior to sellout games.

Along Art Rooney Avenue, attractions and games are set up prior to every game for the younger fans. Fans gather outside of Heinz Field to enjoy the famous Rib Fest, a Pittsburgh tradition since 1990. The event serves as a way to kick off both the Steelers’ and Panthers’ football seasons, as patrons enjoy various smoked meats in anticipation of their beloved teams’ football season.

To kick off football pregame performances, the Pitt marching band parades toward the stadium and tailgaters know that’s their signal — it’s time to pack up and head inside.

Once on the field, the trumpet players stand and blare their horns at midfield to get fans’ attention focused on the field. Shortly after, the drumline rushes out of the tunnel and heads straight to the student section to get the crowd warmed up. The rest of the band follows the drumline’s lead and gets into formation to perform before the game.

The band isn’t the only thing hyping up the crowd pre-game. Once the band has concluded its brief concert, an introduction video is played engaging fans and students with chants, stats and videos of historic Pitt football highlights.

The video abruptly cuts to a live feed of the locker room. The doors open and the crowd erupts while the video screen shows the team walking out of the locker room toward the tunnel. The camera follows them through the tunnel and onto the field where stadium announcer Joe DeStio announces the Panthers, saying, “Bring on your Pitt Panthers.”

The Panther Pitt is the name of the Pitt football student section, located in the lower sections behind the endzone opposite of the scoreboard. The purpose of the Panther Pitt was to create an atmosphere at football games similar to the atmosphere fostered by the Oakland Zoo section at basketball games. Within the Panther Pitt, several traditions have developed among the students such as tossing up students every time Pitt scores, banging on the backs of the seats on third down, pretending to pour ketchup bottles when Pitt enters the red zone, putting up four fingers at the start of the fourth quarter and chanting “go Pitt go Pitt first down” for every first down the team gets.

The annual bonfire and pep rally take place the week of the first game and helps show newer Pitt students what to expect on gameday. A night filled with all sorts of fun, students who attend get free shirts and an introduction to the atmosphere they can expect at Heinz Field.

The event takes place at the Cathedral of Learning’s lawn and marks the start of the football season. The night is capped off with the lighting of a bonfire that students crowd around to enjoy.

While it may not be football-specific, Victory Lights are one of Pitt’s greatest and most well-known traditions. The top of the Cathedral of Learning lights up gold at night following a Pitt football victory, giving the Oakland sky a golden glow.

Nowadays the Victory Lights are lit up following all Pitt football victories along with any other significant wins from Pitt athletics. A newly added beam of blue lights shoots into the sky giving a Pitt blue and gold effect in the night sky.

Recently, a few newer traditions have popped up in and around Pitt football.

At the center of attention the past couple seasons is Pitt’s “turnover dunk,” which takes place when the Pitt defense forces a turnover. The player who recovers the turnover runs to the bench and slams the football through a hoop held up by their teammates.

Following a victory, another newer tradition has developed among the players. A player who had an impactful performance is given the honor of climbing atop a ladder and conducting the Pitt band in the school’s victory song.