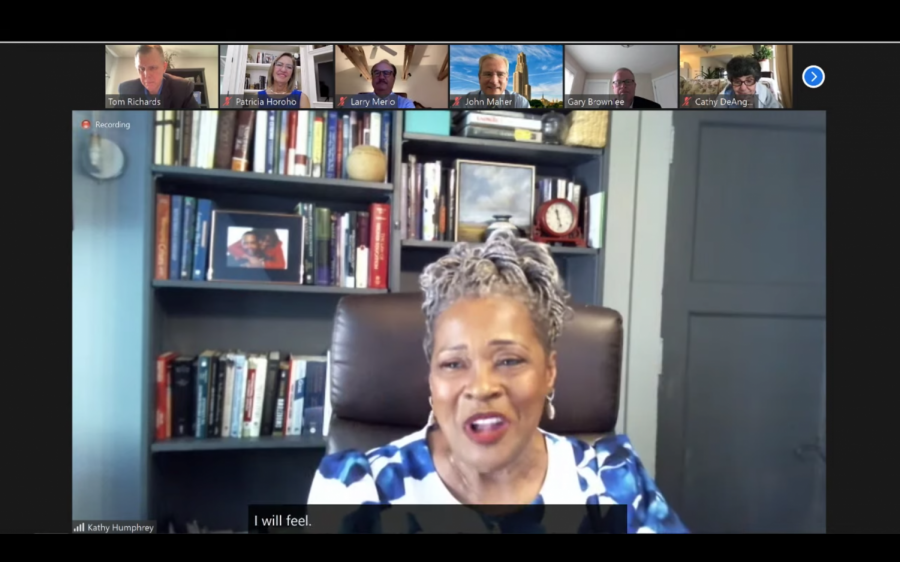 Kathy Humphrey, outgoing senior vice chancellor for engagement and secretary of the board of trustees, speaks at the board's Friday morning meeting.

Pitt’s board of trustees approved several measures at its Friday morning meeting, including several new and re-elected trustees and amendments to the University bylaws. The board’s governance and nominating committee had previously voted in favor of the moves.

The board approved Mary Ellen Callahan and Louis Cestello as vice chairpersons for one-year terms. Callahan and Cestello have been on the board of trustees since 2009 and 2017, respectively. Thomas Richards will continue in his role as chairperson of the Board for a second year.

The board also approved a change to Chapter II, Article IV, Section 4.6 of Pitt’s bylaws. The revisions would allow any of Pitt’s schools or regional campuses to petition the provost to extend the total number of years that a faculty member may serve without tenure in the tenure stream to no more than 10 years.

The board voted to elect Eva Tansky Blum, a former Board chairperson, as the new University director to the UPMC Board of Directors.

The board also recognized Kathy Humphrey — the senior vice chancellor for engagement, secretary of the Board of Trustees and associate professor of education — for her dedication of more than 30 years to higher education. Humphrey is leaving Pitt to begin her new role as the 11th president of Carlow University on July 1.

During her time at Pitt, Humphrey, who also served as the dean of students prior to Kenyon Bonner, worked to improve mental health services for students, developed a sophomore year living and learning program, facilitated the availability of new technologies such as Campus Connect and improved career services.

As senior vice chancellor for engagement and board secretary, Humphrey oversaw several University units, including the offices of University Communications and Marketing, Community and Governmental Relations, Academic Ceremonies and University Events, University Senate and Equity, Diversity, and Inclusion. Humphrey also managed many of the Chancellor’s special projects, including the Wellness Committee, which evaluated the need for a smoke-free campus, the Socially Responsible Investing Committee, the Committee on Disability Inclusion and the first Senior Leadership Academy.

Humphrey was also recognized for her role in founding the Office of PittServes, Community Engagement Centers initiative, the Office for Equity, Diversity, and Inclusion and the Office of Cross-cultural and Leadership Development.

“Kathy, you know how much we love you and appreciate you. We are so proud of you. Carlow is going to thrive under your leadership,” Chancellor Patrick Gallagher said. “We look forward to saying President Humphrey around Oakland in the coming months.”

Humphrey said she is grateful because working at Pitt allowed her to “fulfill the purpose of [her] life.”

“That purpose is to make a difference in the lives of other people in a way they become stronger, they become wiser, they know that they are cared and valued for,” Humphrey said. “And that is indeed what Pitt has done for me.”