Who’s who: Your guide to the big names at Pitt 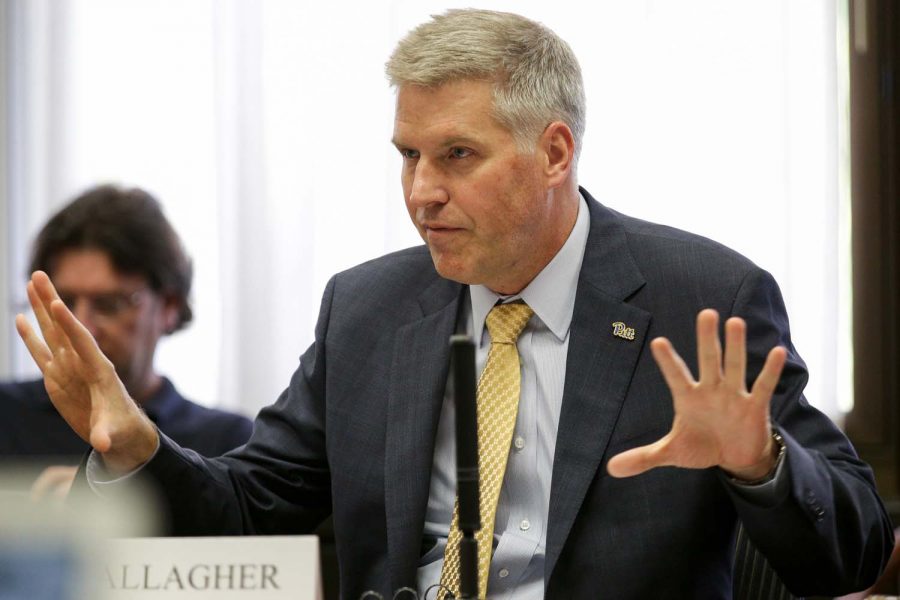 Chancellor Patrick Gallagher, one of the top administrators at Pitt.

Pitt is filled with students — just over 30,000, from all across the state, country and even the world. That makes it virtually impossible to remember everyone’s name, let alone all the “important” people like faculty members and leaders of student organizations. So we’ve got you covered. Here’s a guide to the big names at Pitt that you will hear — and read in The Pitt News — most during the year.

As Pitt’s 18th chancellor, Gallagher received his Ph.D. in physics from Pitt in 1991 before becoming chancellor in 2014. In between, President Barack Obama appointed him to direct the National Institute of Standards and Technology in 2009. These positions earned him his own Wikipedia page.

At Pitt, he’s responsible for the general well-being of the University, cultivating Pitt’s relationship with the Oakland community and raising University funds. He’s worked on construction projects across campus and started new programs to prevent sexual misconduct on campus. He’s also made commitments toward advancing racial equity on campus, admitting last May that Pitt “let down” its Black students following the murder of George Floyd and subsequent civil rights movement.

After an unusually tumultuous Student Government Board elections last spring, Ramanan won the SGB presidency with 62.72% of the vote — the highest voting percentage in the past five years. Ramanan — a rising junior neuroscience major — has made the presidency entertaining, playing bachelorette and going on “dates” to see who she would appoint chief of staff. In her position, she’ll serve as a representative for Pitt students in meetings with faculty and administration.

Chances are you’ve already gotten some emails from Cudd and wondered what exactly a “provost” is. Cudd acts as the University’s chief academic officer and is in charge of developing and implementing various academic programs and initiatives. She helped launch an initiative to match federal Pell Grants.

Prior to being appointed provost in 2018, Cudd served as Boston University’s Dean of the College and Graduate School of Arts and Sciences. She holds a Ph.D. in philosophy and two master’s degrees from Pitt.

Once the University finds a new dean of students, Bonner will take on a new role as vice provost for student affairs. In this position, he will supervise the new dean of students, be a part of the Chancellor’s Senior Leadership Team and be the liaison for the Student Affairs departments at Pitt’s four branch campuses.

Bonner started at Pitt in 2004 in a number of positions before getting the vice provost and dean of students job in 2016. Along with his more official commitments, Bonner also hosts a YouTube series called “Riding in Cars With Kenyon.”

Alongside Bonner’s promotion, Pitt launched a search for a new dean of students who will oversee student resources, such as the University Counseling Center, the Career Center, PITT ARTS and more. A committee of administrators, faculty and students are in charge of selecting and interviewing candidates. Finalist interviews for the position began on June 7. The committee will make recommendations to Bonner, who will make the final decision about who gets the job.

Pickett began in his role last academic year. His job is to create a welcome, inclusive and equitable environment for students, faculty and staff. His tenure coincides with a push by Black students and student organizations for more equity and transparency within the University.

Before coming to Pitt, Pickett was the chief diversity officer for the Minnesota State Colleges and Universities System since 2017, and previously served in that role for the nearby Community College of Allegheny County. He is also an alumnus of Pitt’s School of Education.

McCarthy’s job is to improve undergraduate education and enhance the academic experience for undergraduate students. Before this position, he was an engineering professor in the Swanson School of Engineering. He was also named interim dean of the University Honors College last year.