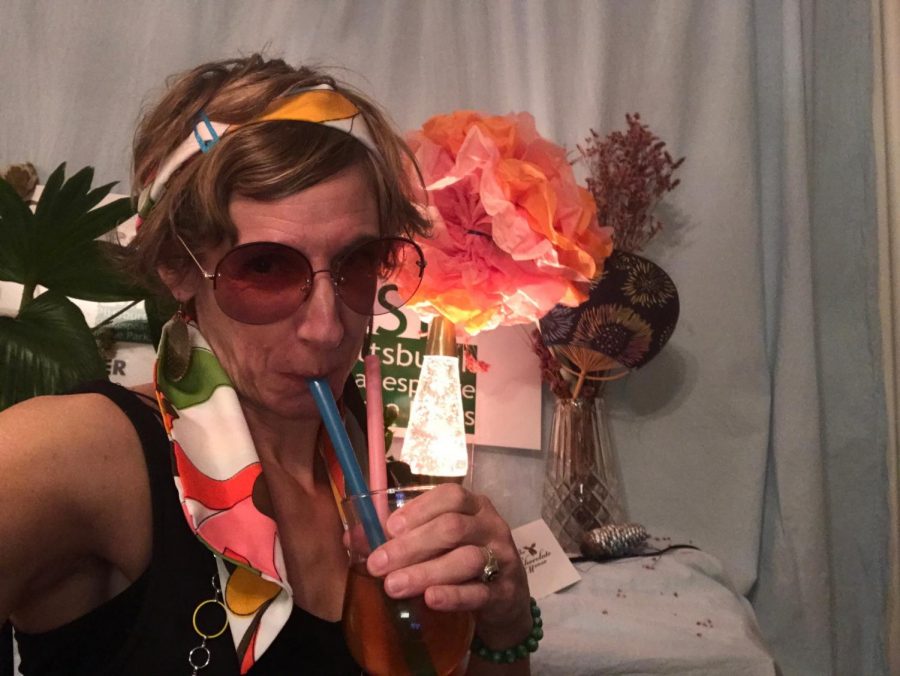 Image courtesy of Pittsburgh Shakespeare in the Parks

Pittsburgh Shakespeare in the Parks presented a Shakespeare-inspired comedy with “Bottom’s Up” Saturday night.

The works of Shakespeare recall passionate romance, witty humor, breathtaking sword fights and, for the improv team of Pittsburgh Shakespeare in the Parks, rocket ships made entirely out of sausage.

PSIP presented an unscripted, Shakespeare-inspired comedy with “Bottom’s Up” Saturday night. The virtual fundraiser, the proceeds from which help PSIP present free theater in parks across Pittsburgh, streamed on the company’s Twitch and Tiltify channels.

The unscripted narrative followed the idea of a “sausage station,” with the protagonist, Aloysius Philomel Brick’nmortar (Young), dreaming of traveling to the international sausage space station after his massage parlor business collapses. But his ambitions spell trouble for Titonya (Tober), captain of the international sausage space station, who feels very protective of her sausages.

Although the premise might bear little resemblance to anything Shakespeare wrote, the team set up the show to follow the narrative arc of a typical Shakespearian comedy. According to Crutchfield, PSIP’s improv team leader, the actors organize each improvised narrative into five scenes to allow for exposition, climax and resolution.

“What we do that kind of actually nicely molds itself to Shakespeare is we try to give ourselves five scenes,” Crutchfield said. “The first scene is an intro to a lead. The next scene introduces the anti-lead or an opposing, contrasting force … Then finally, by scene four or scene five, we have an opportunity to climax the conflict and then resolve it in scene five.”

Along the way, side characters with their own ambitions complicate Aloysius’ quest for sausage-powered space flight. Local sausage monger Dim Snoozemeyer (Soteres), for example, goes vegetarian and threatens to replace all his products with soy meat substitutes.

Crutchfield said managing so many characters with different wants and needs can prove difficult, but adding extra layers to a scene can also give the actors new material to work with.

“Instead of a singular ‘I want’ that’s easy to pursue and then add specific details to, we have kind of two paths to provide for,” he said. “We had a great deal of fun exploring how to do that. And it actually gave us an additional richness of characters that we weren’t really anticipating.”

Besides the five-scene narrative arc and eccentric supporting characters, the actors added Shakespearean flair to the show by taking iconic lines directly from other plays, launching into soliloquies and speaking in rhyming couplets. Aloysius, for example, began the first scene with a series of rhymes lamenting the loss of his massage parlor.

“If lotion be the food of love, rub on. My favorite movie is ‘The Wrath of Khan,’” Young rhymed. “My life and my dreams are so very weird these days, I sometimes feel like I’m walking around in a haze.”

Young said when constructing a rhyme on the spot, he pays attention to the ending of the first line, making sure the last word will set him up for success in the next line.

Audience members could request new props or musical interludes about a subject of their choice, and used the chat to vote on which character would succeed at the end of the show.

Crutchfield said new ideas like these from the audience can help the actors get out of their own heads and have more fun.

“We’re so guarded and tediously attentive to what we’re trying to do to make sure the narrative has some coherence,” he said. “But sometimes coherence be damned, especially if the audience is having a good time with us, and they want us to go off on a tangent.”

During PSIP’s improv rehearsals, the team works on incorporating emotions into their scenes as a method of strengthening their improvisation. According to Crutchfield, Shakespeare’s carefully crafted verse lends itself to expressing drastic moods.

“You’re able to put into those careful words big, huge, sizzling, potent emotion,” he said. “A lot of times when I work as an improviser, and we work on the genre of improvising as a Shakespeare performance, what we try to do is really give credence to that idea of great big emotions.”

Tober said improvised shows like “Bottom’s Up” help PSIP make Shakespeare fun for audiences who might otherwise shy away from the archaic language and perceived seriousness of the playwright’s original work. She said improv comedy helps the company make Shakespeare accessible to everyone.

“One of the things we like to do is to make it very accessible to people and make it fun for people,” Tober said. “Just kind of turning it on its head, making it accessible, making it funny, making it contemporary. Bringing it to people in a new light.”