Pitt football off to lively start in 2022 class recruiting period 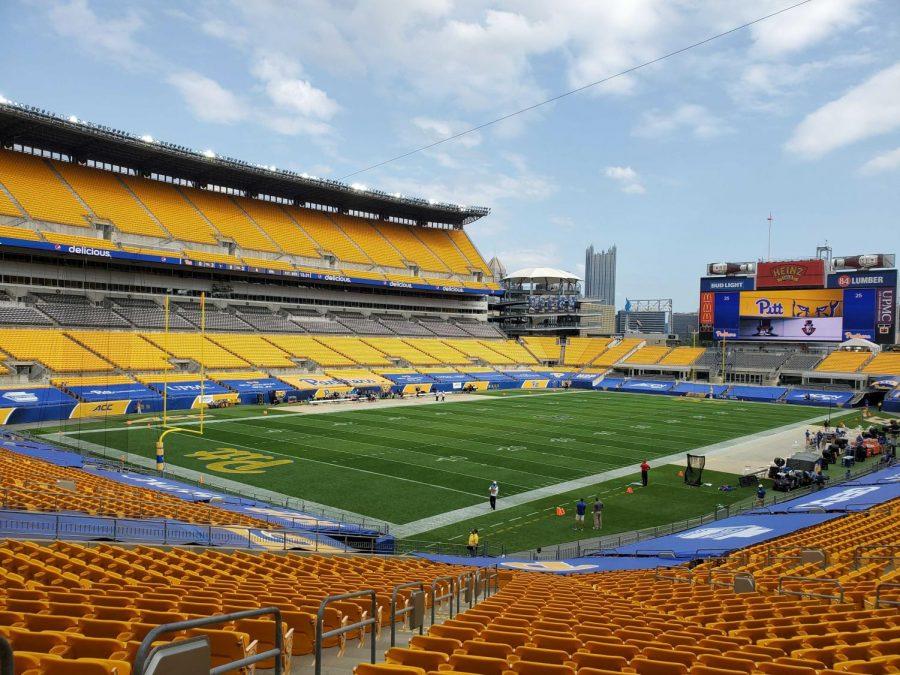 Pitt Head Coach Pat Narduzzi and his staff racked up four verbal commitments just this weekend after players took their official visits to the Steel City.

Every college football program in the nation traversed unprecedented obstacles over the course of the past year and a half as recruiting came to a near standstill. After hundreds of virtual tours and Zoom calls, Pitt head coach Pat Narduzzi and the rest of the staff are beginning to welcome high school football players back to the Steel City.

The 2022 recruiting class has gotten off to a quick start for the Panthers. Narduzzi has been able to secure 11 verbal commitments, including eight three-star prospects along with another verbal commitment from an international two-star recruit and two recruits without a “star” denomination.

Since the NCAA lifted the dead period for recruiting on June 1, the Panthers have hosted a number of students at their facilities for both official and unofficial visits. Athletic Director Heather Lyke said at a May press conference that visiting Pittsburgh and seeing the City firsthand is often a deciding factor for a lot of recruits and the entire program was looking forward to having the charm of the City back on their side.

“One of the best things about Pittsburgh … is coming here and visiting it,” Lyke said. “The opportunity for recruits to come to Pittsburgh and see what Pitt is about and what the vibe of the City is and how much the City cares and supports sports … I think that’s a real asset for us and a real selling point.”

Lyke’s theory has been proven to be true this past month.

2022 offensive tackle Ja’Kavion Nonar was one of the many recruits taking their official visit at Pitt this past weekend, and the Florida native didn’t need to spend much time in the Keystone State for him to know Pitt was where he wanted to play his collegiate football. The City seems to be the cherry on top of Narduzzi’s close-knit culture he has fostered at Pitt for Nonar.

“Once I saw what I had to see about the offensive linemen, and the true family environment around Pitt, I was impressed,” Nonar said in an interview with Pittsburgh Sports Now. “I liked the city of Pittsburgh, too. Everyone seemed so welcoming and it felt like home.”

Three-star speedster athlete Che Nwabuko, who also committed to run track at Pitt, was also in Pittsburgh this past weekend. And like Nonar, getting onto campus and seeing everything firsthand seemed to seal the deal for the 247sports top-1,000 2022 recruit.

“This official visit was way, way more than I thought and expected it would be,” Nwabuko said in an interview with Pittsburgh Sports Now. “It really blew me out of the water. Honestly, I thought Pittsburgh was some old, rundown place, steel mills, but I was wrong and it was a whole different experience than I was expecting it to be.”

Nwabuko is undoubtedly one of the fastest players in the entire 2022 class clocking in at 10.44 seconds in the 100m dash. A 10.05 second time at the distance would be good enough to qualify for the American Olympic team.

The weekend was certainly a good one for the Panther program but the biggest winner may be one of Pitt’s newest staff members — wide receivers coach Brennan Marion, who is now ranked as the No. 13 recruiter in the ACC.

Marion, who came onto the staff after former wide receivers coach Chris Beatty departed for the NFL in late January, was Nwabuko and Brown’s lead recruiter at Pitt. One of the most important jobs for college coaches is to sell big name recruits on their school and Marion has done so in his first month of being able to host players on campus.

Although prospects who play domestically have the ability to visit campus, international players, such as Australian kicker 2022 commit Sam Vander Haar, have been unable to lay their eyes on the Steel City firsthand.

The recruiting process in Australia is much different than the experiences recruits have in the states. Recruits that are being recruited domestically typically listen to pitches from a multitude of coaches across the country before deciding where they’ll play their college ball. But according to Vander Haar, he only sent film to his top choice — Pitt — and waited to hear the decision from the Panther program before even considering contacting other schools.

“We don’t really entertain other offers,” Vander Haar said. “There may have potentially been other offers, but I never would have known of them because we try to keep it very respectful for Pitt and vice versa.”

Vander Haar, who committed slightly over a month ago, has been able to see Pitt’s facilities and campus through FaceTimes and virtual tours. After doing research about the school and football program, he was sold on the idea of being a Panther.

“Knowing how prestigious the Pitt program was, it was a no-brainer,” Vander Haar said. “As soon as the opportunity came, it was never, ‘I don’t know if this is going to be the spot for me,’ … as soon as [Pitt] came knocking, I was all for it.”

With official visits just resuming within the last month, the 2022 recruiting period is still in its infancy but the Panthers have gotten off to a lively start. Marion, Narduzzi and the rest of the staff will continue adding to their still growing 2022 class over the remainder of the summer.