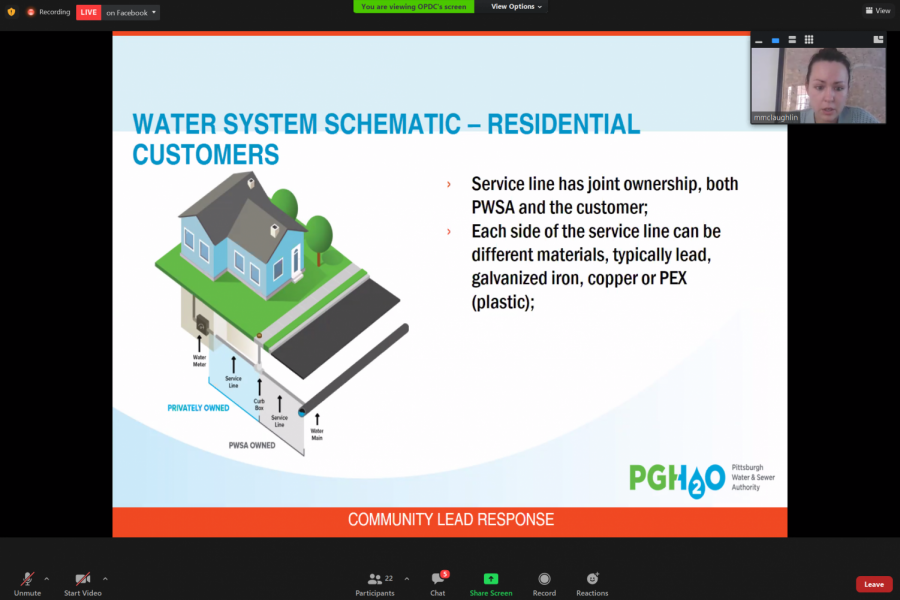 At the Oakland Planning and Development Corp.’s monthly public meeting on Tuesday, one Oakland community member asked a question that many wonder in the construction-filled neighborhood.

“So jackhammering will be permitted at 7 a.m.?” the member asked.

The meeting consisted of two presentations, including a property owner seeking community input on property construction at 3730 Dawson St. and the Pittsburgh Water and Sewer Authority explaining the process of replacing water mains throughout Central Oakland.

Mora McLaughlin, construction communications project manager at PWSA, said the agency will replace water main lines throughout Central Oakland because the lines are small in diameter, old and are prone to leaks and breakages. She added that besides replacing water mains, PWSA will replace any lead service lines attached to the main lines, which will upgrade the aging infrastructure and improve water quality.

McLaughlin said the construction is estimated to occur from mid-July to the end of 2021 or beginning of 2022. She said the first step of replacement is inspecting and verifying service line material that is connected to the old water main, which will help identify lead service lines.

She added that the new water mains would then be installed and after being sanitized and tested for pressure deficiencies, the new service lines would be connected to the water mains — which may shut down water main intersections for one to two days.

McLaughlin said any lead service lines — which are what connects the water main to individual properties — found on private property will be replaced for free, with permission from the property owner. She said property owners who decline the PWSA from replacing their lead pipes will have their water shut off until the pipe is proven to be replaced.

“If a property owner does not return the agreement, or declines the replacement, does respond but says, ‘No I don’t want this to happen,’ and it’s confirmed there is a private lead service line, PWSA is required per the regulation to terminate water service until that customer replaces the private side on their own dime, and proves to us that work has occurred,” McLaughlin said.

The final step includes restoring any sidewalks or roadways that were damaged due to construction. In response to the question about early morning jackhammering, McLaughlin said she will remind the workers to keep noise levels to a minimum, but the start of the workday — which begins at 7 a.m. — usually consists of workers prepping the site and preparing for the day.

Jeremiah Brooks, senior associate at Stantec Architecture, presented plans for construction at a South Oakland lot located at 3730 Dawson St. Brooks said he is planning for it to either be split into two lots or maintained as one.

Alternatively, Brooks said having one house as a duplex on the lot would allow space for parking in the back of the lot, but the property owner must ask for “variance,” to waive specific zoning laws and regulations on a lot. While the property owner needs permission to break specific zoning laws and regulations, only one curb cut is needed to allow parking in the rear.

Wanda Wilson, OPDC’s executive director, said while the plans are not an official development, the owners are turning to the community for their input and thoughts on the property’s plans.

“This is, the owner is coming towards the community just to be, to get people’s viewpoints and thoughts on these two options, so they can determine what they want to do and then be able to go through the process,” Wilson said. “So it really is an opportunity for you to just get input from people today about the different sort of pros and cons of each.”

One community member from the meeting suggested making the building a townhome unit, which does not require off-street parking. Because the property owner also owns an adjacent parking lot, the community member said the owner could provide parking in that lot.

Brooks said even though the planning is in the very early stages, “any feedback is good feedback” that he and the property owner can address and consider. Brooks said his presentation was to “touch base” with the community before proceeding with the planning and

encouraged community members to fill out a form if they have any feedback for the property owners.

“We just wanted to make sure that we touch base with the community before we got too far ahead of ourselves, and to make sure that there was nothing that we were proposing [that] was out of line with what was expected or what was wanted,” Brooks said.