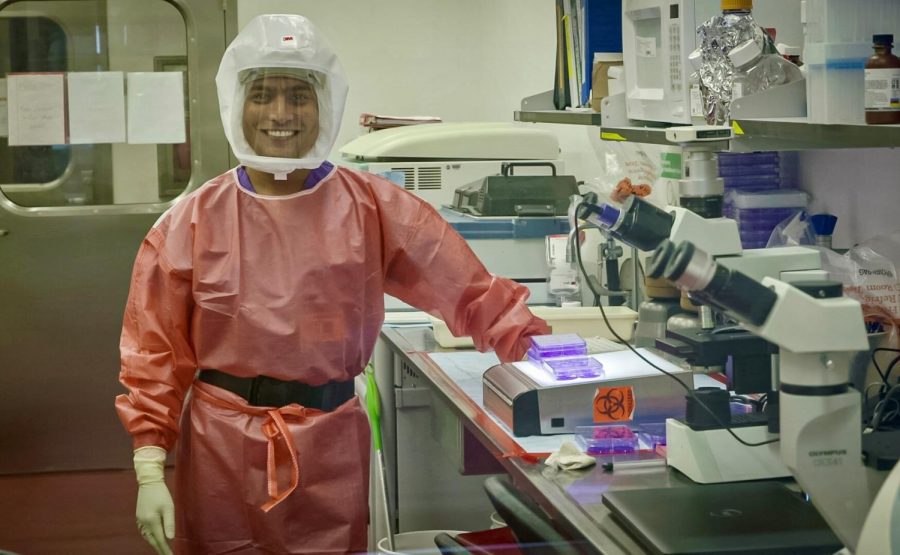 Dr. Shamkumar Nambulli, a researcher from the Center for Vaccine Research, worked on the delivery of the nanobodies to hamsters to fight against COVID-19 and neutralize the virus’ effect on the body.

By Shreya Joshi, For The Pitt News

Pitt researchers were the first to identify a possible new treatment for COVID-19 — nanobodies.

Pitt researchers published a paper in Science Advances detailing the idea of delivering nanobodies — antibodies derived from mammals in the camel family and 10 times smaller than traditional human antibodies — to hamsters who were severely infected by COVID-19. A group of departments collaborated for this preclinical trial, including Pitt’s Center for Vaccine Research, the Department of Microbiology and Molecular Genetics, Department of Cell Biology and Department of Immunology, and named the nanobodies PiN21 or “Pittsburgh Inhalable Nanobodies 21.”

Dr. Yi Shi, an assistant professor in the Department of Cell Biology who participated in the nanobody research, said this is the first time that these nanobodies were used to treat COVID-19 and were particularly effective.

“Nanobodies were especially effective due to the stability and small size of their structure and are even a cheaper option,” Shi said, “as the nanobodies can work efficiently in small concentrations.”

Shi said before testing on hamsters, the team developed the nanobodies from llamas. Shi said they chose to use llamas because of the unique physical and chemical characteristics of their antibodies, which are ten times smaller than human antibodies and are more likely to bind with the virus and produce antigens, or molecules capable of stimulating an immune response.

Shi said they started working on the nanobodies’ effect on COVID-19 in late March and found that PiN21 blocks the receptor binding of the virus directly, meaning the nanobodies blocked the virus from getting attached to cells in the body. The nanobodies were able to neutralize shared parts of COVID-19 which can easily mutate into different variants.

“Last April in 2020, I began to achieve my second dream,” Shi said. “Started thinking about the stability of the nanobodies, which is the most important part, and came up with the idea of aerosolization of nanobodies.”

Shi said because of the small particle size of nanobodies — around two to three microns — they reached the alveoli, or the smallest unit of the lungs, and were able to produce beneficial effects even with less concentration delivered at a time. Hamsters who received the treatment were able to improve from sickness caused by the virus and had no weight loss. The virus also had less of an effect on the hamsters’ nasal cavities, throat and lungs compared to the control group, or hamsters who were infected with COVID-19 but did not get any treatment.

For Shi, giving these doses through an intranasal way was a novel idea and proved to be effective in treating COVID-19 in low dosages.

“But aerosolization was the game changer for us, with which we were able to deliver more efficient treatment, and million-fold reduction in virus load in lungs,” Shi said. “We were able to suppress the virus sufficiently and minimize the chance of replication with reducing infection in upper and lower respiratory tract, that was a huge success for us.”

Reed said the team is now awaiting more funding to be able to continue with their work after their research was published.

“Right now we are waiting for more funds to come,” Reed said. “However, NIH (National Institutes of Health) is now more interested in approving funds to us as NIH is also interested in intranasal aerosol delivery as a new and effective way to treat lung diseases and increasing treatment scopes in other lung pathologies like influenzae and cystic fibrosis.”

According to Shi, Xiang Yufei, a research assistant in the Department of Cell Biology, carried out most of the research and Dr. Shamkumar Nambulli, a researcher from the Center for Vaccine Research, worked on the delivery of the nanobodies to the hamsters to fight against the virus and neutralize the virus’ effect on the body.

Nambulli, who came to Pitt in 2018, previously worked with other high-risk viruses like Ebola. He said the laboratory facilities available at Pitt have Biosafety Level-3 (BSL-3), or the third highest safety level for regulating labs, allowing them to perform their pathology research effectively.

“Pitt works on more vaccines, which was my experience,” Nambulli said. “Before, we were not primarily associated with coronavirus work. But Pitt has a BSL-3 facility available with good immunologists and virologist availability. So, with all the good facilities we started working on SARS COV-2, and published a lot of things.”

Nambulli said since they mainly work on nanobody treatments in their lab, their other papers focused on different types of COVID-19 variants and more specifically how nanobodies are very efficient in treating these variants in low concentration.

Reed said the research team plans to take future actions on this trial and “scale up” on test species, with the hope of one day beginning human trials.

“In the future, we are trying to test this nanobodies delivery method in larger animal trials of African green monkeys who are mostly like humans,” Reed said. “We are also looking to scale up manufacturing, as this kind of materials are easy to scale up, and then at the end we are looking to go ahead with human trials.”

Shi said the research team received positive feedback from the Pitt community and is excited about the innovation.

“The young generation is cheering their success and embracing the new innovations and getting more interested in it,” Shi said.