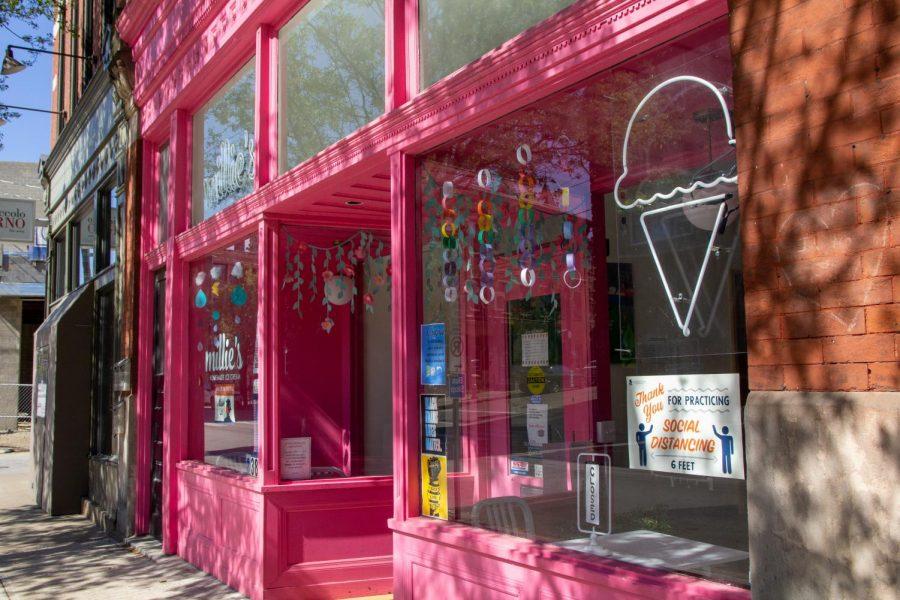 With businesses continuing to reopen, ice cream shops in Pittsburgh, such as Millie’s Homemade Ice Cream, hope to provide a treat for everyone.

By Grace Hemcher, For The Pitt News

Millie’s Homemade Ice Cream, a Pittsburgh ice cream staple co-founded by Lauren Townsend, debuted its first storefront in Shadyside five years ago. The Oakland location, which opened in fall 2019, was extremely popular among students until the pandemic hit and Pitt’s campus emptied out.

The Millie’s location in Oakland serves customers from both inside Pitt’s bookstore and through a window overlooking the quad. The location, favored for its convenient, central location, started to notice the lack of people around campus after the onset of the pandemic, Townsend said.

“We also just generally saw less traffic on campus,” Townsend said. “I don’t have any figures to support this, but it certainly felt like less students and faculty were walking around campus.”

Like Townsend, Andy Hardie, owner of Dave and Andy’s in Oakland, has noticed fewer students roaming around his Atwood Street shop, but he said this is a predictable reality for summers on campus.

“Summers are a little funny. Just ‘cause you would think it’d be way busier, but spring and fall are still about the same,” Hardie said. “There’s just not as many students here in the summertime, particularly since COVID.”

For some off-campus shops with peak summer seasons like Page’s Dairy Mart, a family business owned by Marjorie Page-Prusia located in the South Side Flats, sales remained relatively consistent during the summer following the initial onset of the pandemic.

Page-Prusia has been working at her family’s ice cream shop since she was 12. After stepping down from her position as a nurse at Jefferson Hospital, she decided to buy the business from her parents last March, just 10 days before businesses began shutting down in Pittsburgh. She said business was particularly hard in these early days.

“Since we were closed for those three weeks in March, you know, we did see a decline in sales,” Page-Prusia said. “But fortunately, we were able to get the PPP loan that helped us pretty much get back to where we were from the previous year.”

Like Page’s Dairy Mart, Hardie also said the effects of the pandemic on Dave and Andy’s were manageable, thanks to faithful customers that return to the shop frequently.

“All in all, it wasn’t horrible,” Hardie said. “I know some places really suffered, but it helps that we’ve been here for so long, and we have a lot of loyal customers that come from outside of Oakland too.”

With local and state guidelines changing throughout the pandemic, businesses had to adjust the way they operated to comply with these guidelines and satisfy their customers. Townsend said demand shifted away from in-store sales and Millie’s had to rethink their strategies and change priorities to meet the needs of consumers.

“We delivered ice cream to people’s homes early on during the pandemic, and we also saw some demand shift toward grocery,” Townsend said. “So we sold more pints to grocery stores, and we also saw more demand for e-commerce. Purchasing ice cream and shipping it around the country.”

Townsend described these efforts as lower-level priorities before the pandemic. But to make up for some of the lost sales, she said the company had to reevaluate its strategies while following state and University guidelines.

Switching to outdoor service was a crucial component in another Pittsburgh-based ice cream store’s efforts early on during the pandemic. Dana Edwards, founder and CEO of The Milkshake Factory, reflected on the success of the temporary external ordering table in front of the Forbes Avenue store in Oakland that kept customers outside and socially distanced.

He said that, while challenging to puzzle together at first, this system worked great in the end, especially with safety as their main priority. And as more of the Pittsburgh community gets vaccinated, Edwards said he noticed shops are beginning to slowly pick back up and move towards a positive future.

“For what we expected for this summer, yes, we’ve definitely rebounded,” Edwards said. “I don’t think we’re all the way there yet … but I think we still are at the tail end of it. I do see everything going in the right direction.”

And with the summer revival, Milkshake Factory hopes to draw in customers with some signature flavors. Popular menu items — such as the noteworthy “Jake Shake,” named after Penguins player Jake Guentzel — were a huge hit even when business was slow in the winter.

“Just for people to get hockey back and be able to have more Jake Shake days was great,” Edwards said. “And I do have to say that Jake really made sure that the Pittsburgh fans were taken care of this season. He did a great job, and we were very excited to see how many Jake Shake Days we could provide.”

According to Townsend, getting ice cream is a simple pleasure that many forgot while in the pandemic and with the days ahead looking bright she hopes ice cream will make things just a little bit better for everyone.

“It’s frivolous, right, when there’s a global pandemic happening to think about eating ice cream,” Townsend said. “But even if we could transport a couple of students into a better frame of mind. I think Millie’s can really do that.”