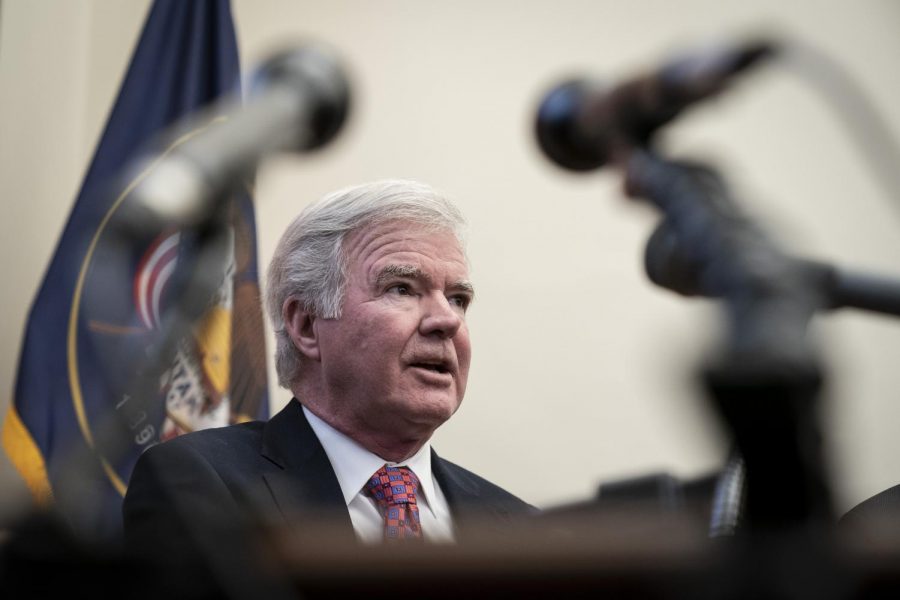 The NCAA and its member schools have fought fair compensation for the players for years. In the wake of evolved NIL rules, senior staff writer Stephen Thompson doesn’t want to forget who held the athletes back. Pictured is NCAA President Mark Emmert.

Disdain for the NCAA and its arbitrary limits on the freedom of a college athlete has become widely popular. According to a Bucknell Institute for Public Policy survey released in June 2021, 60% of Americans support the right of college athletes to make money off of endorsements.

Backing for the players’ rights to earn money off of their talents has become popular consensus to the point that “I’m not against athletes getting paid, but” tends to precede any dissenting argument.

It made me wonder how an idea that was so popular could find itself stalled in bureaucracy for so long. It has, after all, taken decades since the NCAA’s inception to right this wrong.

An underlying opposition to this era of player empowerment runs from the most casual of spectators up to the highest levels of college athletics. The same institutions and people that actively campaigned against the mildest of player compensation solutions — releasing name, image and likeness rights to the athletes — are now attempting to pull an ambitious 180 and jump on the bandwagon long after it has left.

The powerful in college athletics are trying to shift the goalposts. As NIL restrictions fall, amateurism itself moves into the crosshairs. The NCAA’s dam — loosely held together by the term “student-athlete” — has sprung a leak. While a recent ruling from the Supreme Court and a myriad of state laws superseding the authority of the NCAA did not automatically bring the idol of amateurism crumbling, it opens the door to such possibilities.

Pitt athletic director Heather Lyke said in May 2020, when the rumblings of NIL changes were growing too loud to ignore, that she thought the practice of athletes selling branded or autographed merchandise “somehow doesn’t feel quite right,”  in an interview with the Pittsburgh Post-Gazette. She expressed apprehension and said that stringent rules were necessary before any athlete gets paid.

She changed her tune when freedom of NIL showed up on her doorstep this year. The NCAA removed the absolute bans on the athletes’ rights to earn money from endorsements on July 1,  and Lyke cheered the decision.

“It’s not a taboo topic. It’s not like something we’re afraid to talk about. It’s real, and it’s great,” Lyke said. “We want them to have a real transparent relationship with us and see us — our compliance office, our Life Skills team and our social media team — as advocates who can help navigate them through opportunities they may be approached with.”

It’s odd to watch Lyke and her contemporaries from around the country champion NIL freedom after years of hesitation, but only if the decades of NCAA history are ignored. In college sports today, you are either riding the wave of player empowerment to a more egalitarian system that returns what it gets to those who’s labor created enormous wealth or you are getting left behind.

Unless you jump on, this business will leave you behind. Yet, those who hold the power in college athletics still try to shackle athletes with the term “amateurism.”

“I don’t see this as a loss of amateurism,” Lyke said earlier this month. “I don’t. We are not paying them. If we were paying them to come to Pitt, it’d be very different. This is just treating them like any other college student in the country.”

But college athletes aren’t being treated like everyone else.

According to Pennsylvania law, athletes have to disclose their contracts to their universities, who also have the power to veto an endorsement opportunity for a player if it is deemed to diverge from institutional values.

The same people and institutions who actively and successfully avoided paying their primary labor force a cut of the hundreds of millions college athletics generates will continue to whitewash the past. But the fact remains that the NCAA and the schools are not anyone’s friends. The NCAA was being outpaced by legal action from state governments and lifted NIL restrictions because of external pressure, not out of the kindness of their hearts.

“Many states have enacted NIL legislation and 10 state laws can take effect this July,” NCAA President Mark Emmert wrote to member schools in June. “It is therefore essential we now enact rules before the end of the month.”

This is a good thing. For the first time in history, college athletes can declare victory over the institution that governs their quasi-professional work.

Aside from the fact that college athletics can now be a little more honest about their true purpose and a group of people will inch closer to fair wages for hard work, it represents a tangible win for the players. Just don’t let the people who tried to prevent this victory celebrate alongside you.