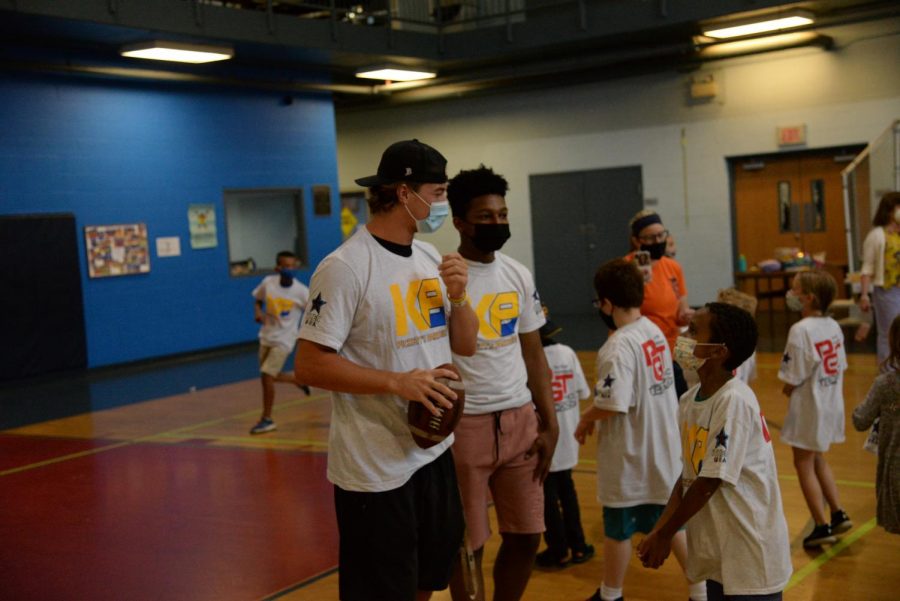 Kenny Pickett talks with kids on Monday afternoon at the Boys and Girls Club in Lawrenceville.

Kenny Pickett had a bit of a homecoming Monday afternoon — but it wasn’t by going back to his native New Jersey.

Pitt’s starting quarterback was back at the Boys and Girls Club, a staple of his youth, to give out some free “Pickett’s Partners” t-shirts and toss around some footballs at the Estelle S. Campbell clubhouse in Lawrenceville. The shirts are part of a collaboration between Pickett, PGT Trucking and custom apparel company Ithen USA, with the shirt sale proceeds going to the Boys and Girls Clubs of Western Pennsylvania.

“My grandfather did work in Asbury Park and he kind of introduced me to it and got me involved, [when I was] like seven or eight years old,” Pickett said. “I was going there growing up and I met one of my best friends there.”

The deal is one of several name, image and likeness agreements that Pickett has inked, including with the Oaklander Hotel to get his offensive line a weekly “hog dinner” at the hotel’s restaurant, car dealership Bowser Automotive and radio station 93.7 The Fan.

While Pickett said NIL deals are a great opportunity for athletes to “make money for themselves,” he thinks athletes should not just be enriching themselves.

“I think it’s also a great opportunity to give back and, you know, spread the wealth, and enjoy with people you hold dear, like the offensive linemen and now this organization,” Pickett said.

He added that he wants to focus on football with the season approaching, but hinted that further deals could be announced towards the end of the season.

Scott Koskoski, the vice president of advancement for the Boys and Girls Clubs, said the organization will use Pickett’s donation to fund programming across its 14 clubhouses in Allegheny and Somerset counties. He said the organization has seen a doubling in its number of children served and physical locations during the COVID-19 pandemic, turning into “learning hubs” for some.

“We will absolutely use these proceeds to directly benefit the after-school and out-of-school time experiences of the 12,000 children that we serve,” Koskoski said.

Koskoski added that he has seen many athletes with NIL deals focused on “maximizing opportunities to make money or to grow their own brand,” but Pickett has “expressed a desire to be very philanthropic and very … oriented to the community.”