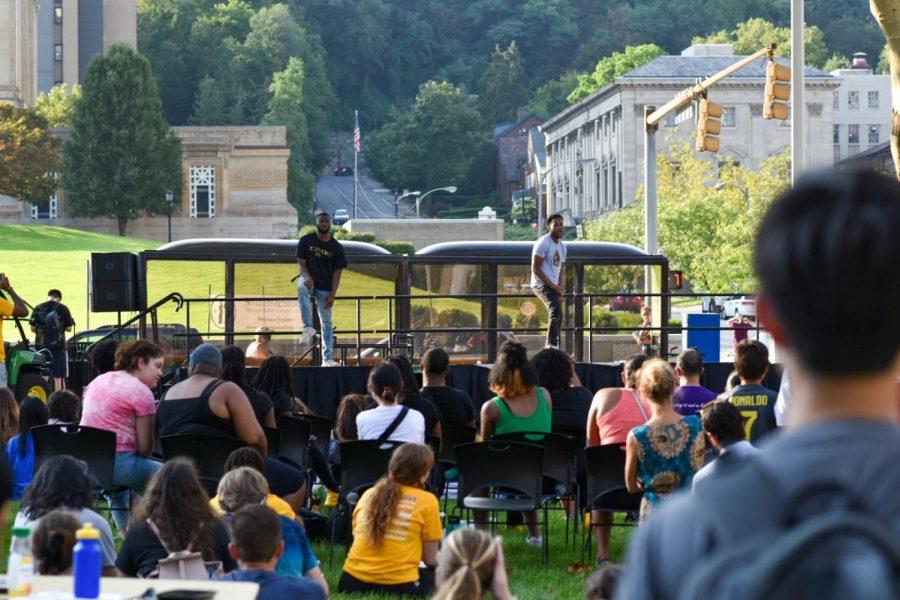 Crowds of students flocked to the Global Carnival on Monday night to enjoy food and performances from a variety of cultural student organizations.

Students swarmed the grounds of the William Pitt Union Monday to kick off one of Pitt’s largest annual Welcome Week events, the Global Carnival. International food and musical performances from cultural student organizations were a staple of the evening.

The carnival, hosted Pitt Global Ties, kicked off with a dance performance from FRESA, a student organization which dances, sings and performs different songs from K-pop, J-pop and C-pop. Performances from student groups such as Hearts Ablaze Dance Ministry, the Omega Psi Phi fraternity and Ya’baso also continued throughout the carnival.

Ella Begovic, a first-year biology major, said the carnival helped her get a feel for Pitt’s diversity.

“I love watching the different dances,” Begovic said. “It shows us all the different things people are interested in — the performances and the student organizations give us a lot of different perspectives and representation.”

Pitt Global Ties held one of many student organization tables at the carnival and organizes many events throughout the school year. Students also enjoyed astrological readings, caricature drawings, magic tricks and accordion music in front of the WPU.

Tran Vi, a junior marketing major, said Global ties organized the carnival to celebrate diverse cultures throughout the Pitt community. Vi, originally from Vietnam, said she became a mentor with Global Ties because of the ways the organization helped her adjust to life at Pitt as an international student.

“I know exactly how I felt when I first came here to the University 一 overwhelmed and lost,” Vi said. “I wanted to be the mentor to help students who feel the same way as I did when I was a freshman.”

Despite the massive crowd, mask usage was not enforced for either performers or students. According to the University’s latest COVID-19 guidelines, fully vaccinated students do not need to wear masks outdoors, though there was no differentiation between unvaccinated and vaccinated students at the event. Pitt announced Friday that students will have the option of attending certain classes either remotely or in person for the first two weeks of the fall semester.

Vi said she felt mask usage should be more strictly enforced during Welcome Week given recent surge in COVID-19 cases from the Delta variant.

Although some students watched the performances and enjoyed the carnival tables wearing masks, the majority went maskless. First-year neuroscience major Zoey Milanovic said she felt safe with this return to normalcy.

“I think Pitt is doing a really good job at keeping us safe, but trying to make [Welcome Week] as normal as possible for us,” Milanovic said. “I like that there’s hand sanitizer everywhere and at indoor events, mask usage is strongly asserted.”

Milanovic said she chose Pitt because of its thriving medical program and strong relationship to UPMC, but also looks forward to taking the lesser-known culture classes Pitt has to offer. Milanovic said seeing the different cultures represented at the carnival made her look forward to continuing her multicultural education.

“This event is really exciting for me because I’ll be taking a Bosnian Croatian class this semester,” Milanovic said. “I found it astonishing that Pitt offers majors for [lesser-known countries]. It makes me really proud to go here.”

Originally from South Dakota, Begovic is a first-generation American. She said she chose Pitt because of its many options for majors and minors. The University also impressed her because of its diverse cultural representation 一 especially the international rooms in the Cathedral of Learning.

“My parents are both Croatian, and I lived in Zagreb, Croatia for 10 years,” Begovic said. “It’s a stark difference from everything here in the United States, but I really like that the Cathedral of Learning has a Yugoslav room.”

Among the student organizations represented at the carnival was Hillel, the Jewish student union on campus and one of many multicultural organizations at Pitt.

According to junior political science major Hannah Goldstein, Hillel holds multiple activities for all students during the school year, including Jewish learning events on campus and Shabbat dinners on Fridays.

“We’re a safe space for Jewish students and Jewish allies on campus,” Goldstein said. “So if you’re interested in Judaism and you want to be part of a strong community, it’s a great organization.”

Hillel is a part of Student Affairs’ Cross Cultural and Leadership Development office, located on the sixth floor of the WPU.

Goldstein said the student organizations at the Global Carnival are just the beginning of the many ways new students can get involved at Pitt. She said first-year students should get involved in campus life in as many ways as possible in order to make the most of their time in college.

“For a while things might not seem like they’re settled, but give yourself time to adjust and stay open to whatever opportunities the University has to offer,” Goldstein said.