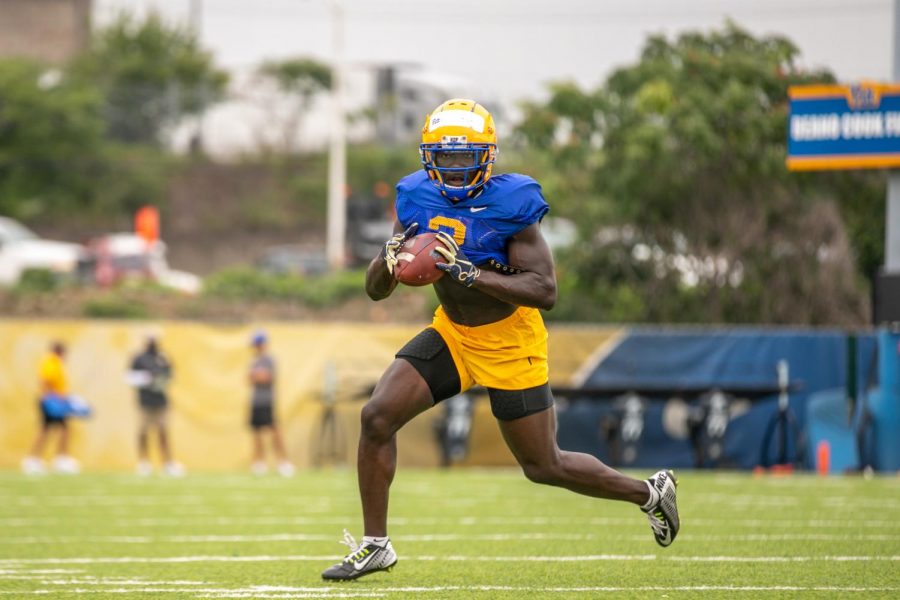 The phrase “turn up the heat” is one used often at football practices. It seems Mother Nature took this request quite literally for the last three days of Pitt football’s training camp. After three consecutive days north of 80 degrees accompanied by high humidity, head coach Pat Narduzzi and his staff concluded camp Thursday.

Training camp is a time for coaches to make decisions about their roster — who’s going to play and give us the best chance to win? Well, it seems Narduzzi isn’t so sure who those players are just yet at a few different positions — defensive back and the place kicker being the most contentious — after wrapping up camp. Although, he doesn’t see the competitions as bad problems to have.

“It’s a good problem to have,” Narduzzi said about the defensive back competition. “If it was already solved, we’d only have one guy that could play that position and the good thing is that it’s ongoing.”

This position battle is one that is tight and for all of the right reasons. The defensive back room is deep with a lot of guys Narduzzi and his staff feel comfortable putting on the field. The Panthers haven’t typically rotated defensive backs in the Narduzzi era, but that could change this year according to the seventh-year head coach due to the depth in the position.

“No doubt about it,” Narduzzi said when asked if he’d consider rotating defensive backs this season. “You can’t run every rep, okay? They just can’t do it. The more depth you have as a football team, the better off you are. I think we have as much depth as we’ve ever had here.”

It seems junior A.J. Woods and senior Damarri Mathis are going to be handling the duties on the outside opposite one another at cornerback. But when it comes to the safety and nickel spots, there’s a good deal of haziness regarding who’ll be stepping out with the first team on that first drive on Sept. 4.

Sophomores M.J. Devonshire, Rashad Battle, Brandon Hill, as well as juniors Erick Hallett II and Marquis Williams, are the remaining defensive backs who seem to be in the mix to play. But Narduzzi is keeping his cards close to his chest and has not given much indication on who will play and it seems he may not even know himself who will be trotting out with the first team.

“It’s ongoing,” Narduzzi said. “We got two really good players [competing to play safety] that may not shake out until gameday.”

The battle for the place kicker position is another that seems it may not be finalized until closer to game day. The Panthers installed new narrow goalposts to evaluate which kicker — sophomore Sam Scarton or first-year Ben Sauls — were hitting the sweet spot the coaches were looking for.

Narduzzi said earlier in the week he wished one of the two would “take the thing over,” but it seems as of Thursday neither had done anything to pull far ahead.

The Panthers opened up practice Tuesday simulating field goals and both kickers went five-for-five from about 35 yards out.

Redshirt senior punter Kirk Christodoulou chimed in on the competition too, saying the battle is just as much a mental one as it is physical for the two young kickers.

“They’ve both been working really hard,” Christodoulou said. “I’m honestly very curious to see how it ends up unfolding, they’ve both done a phenomenal job all camp … camp is more a mental battle than it is a physical battle. We all know that we can kick nice balls, snap nice balls, but how to do it consistently with a positive attitude and a good mindset is the biggest thing.”

One of the most talked about stories this camp has been the emergence and evolution of sophomore running back Israel Abanikanda. According to the running back, he’s put on nearly 30 pounds in the gym since last year’s camp. Although he’s certainly developed physically, the sophomore credits “buying in” mentally as a reason he’s poised for a big year.

Abanikanda has looked solid catching the football this week, a skill that will serve as a valuable safety blanket for super-senior quarterback Kenny Pickett. But it’s his speed that has impressed his teammates the most in camp.

“He’s explosive,” redshirt junior offensive lineman Jake Kradel said. “He sees a hole and he takes it — he takes it for about 15, 20 [yards] and he’s gone.”

It’s tough for the coaching staff to dismiss junior running back Vincent Davis from the starter conversation, especially with his 247-yard performance against Georgia Tech in last year’s season finale still in the rearview mirror. Narduzzi was unwilling Tuesday to officially name either one of the backs as the official starter, but did admit Abanikanda was the group’s most consistent throughout camp.

“It’s a back and forth slugfest,” Narduzzi said. “I’d still say Izzy is the guy you’d trust the most and it comes down to trust right now.”

The “We not me” mantra

The Panthers roster is laden with seniors — guys who are entering their final year of eligibility and played together for upwards of five years. Inherently, this team is one that seems to be very close to one another and a group that has certainly bought into the 2021 slogan — “we not me.”

“Our bond is great, it’s something I’ve never felt before,” redshirt senior offensive lineman Marcus Minor said when asked about his relationship with the other linemen. “When we have bad days we’re able to work it out, on good days we pat each other on the back … I’m excited for this group, I can’t wait to keep balling with them.”

With less than 10 days to kickoff, Narduzzi feels this may be the tightest group of players he has ever had the opportunity to coach.

“I think our kids are locked in,” Narduzzi said. “I love the team we have, I think the chemistry is good, I think we’re close, I think we’re tightknit … it’s been a long camp, they’ve been together, spent a lot of time together. I think we’re a heck of a lot closer now than we were at the beginning of the summer.”

The Panthers will kickoff their season on Sept. 4 against the UMass Minutemen at Heinz Field.