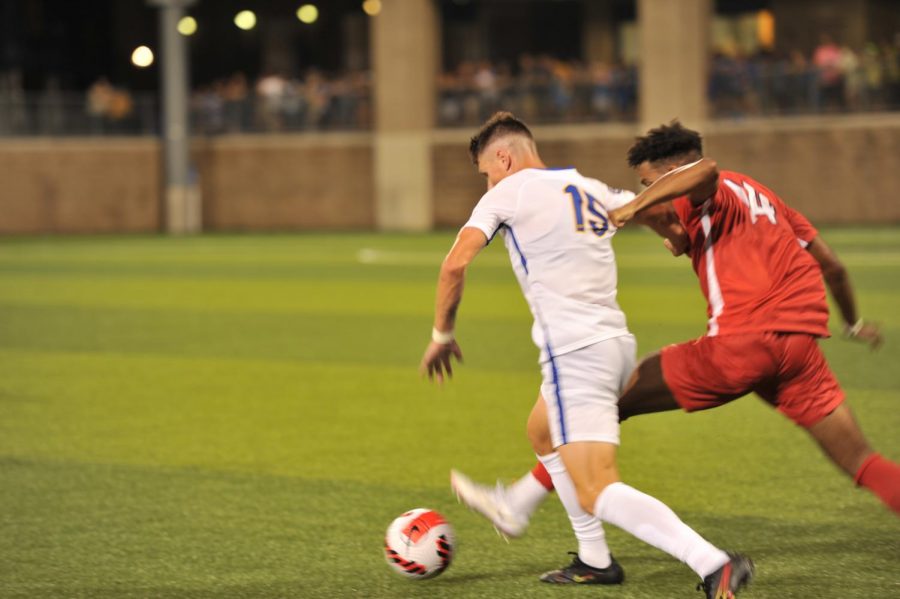 Carlo Zollinger | For The Pitt News

No. 3 Pitt men’s soccer defeated the Dukes 7-0 during their opening season game at Ambrose Urbanic Field on Thursday night.

Fans packed Ambrose Urbanic Field to watch No. 3 Pitt men’s soccer open its regular season slate against Duquesne on Thursday night. In front of the first near-full-capacity crowd at the stadium in well over a year, the Panthers handily defeated the Dukes 7-0.

“You have to be happy with the results,” head coach Jay Vidovich said. “Made some good goals there, created some good things.

But from the opening kick it was clear that Duquesne would not shy away from the opportunity to knock off the Panthers. The Dukes proved to be far more aggressive in the first 15 minutes of play, applying constant pressure on the ball and forcing the Panthers into several early giveaways. Despite the eventual offensive outburst, Vidovich was not pleased with his team’s play in the first half.

“I did not like the whole first half at all,” Vidovich said. “Besides the goals … the rest was sloppy, very individual and a lot of breakdowns and was just not what we expect from Pitt soccer.”

Duquesne refused to allow Pitt’s high-powered attack to operate methodically, but eventually, the Panthers adjusted to the pace of the match.

Graduate fullback and reigning ACC Defensive Player of the Year Jasper Loeffelsend drew a foul deep in Duquesne territory in the 15th minute. Just moments later, a nifty move by sophomore midfielder Filip Mirkovic set up star junior forward Valentin Noel in front of the goal. Noel dumped the ball off to sophomore forward Bertin Jacquesson, who gave the Panthers their first official goal of the 2021-22 season in the 17th minute.

Unfortunately for the Dukes, it seemed as if one goal was all the Panthers needed to completely shift the momentum. Pitt continued to pressure Duquesne’s back line, and after several threatening shot attempts, junior midfielder Veljko Petkovic eventually tapped in a goal from point-blank range off a deflection from the head of sophomore midfielder Luke Mort in the 23rd minute, putting the Panthers up 2-0. Vidovich praised Mort’s performance after the game and his involvement in the offensive attack.

“What can you say, Luke Mort was a part of the first couple of goals one way or another,” Vidovich said. “He got the goal or he created the assist. He did a really good job — very honest game.”

Before the Duquesne back line had nearly any time to regroup, Loeffelsend was already darting down the right sideline for another Panther chance. He dumped the ball off to Mort in the corner, who delivered a cross to the feet of Petkovic in the middle of the box, and he found the back of the net in the 25th minute for his second goal in 68 seconds.

The Panthers remained in control, generating numerous other clean looks in the half, but ultimately took a 3-0 lead into the halftime break. Despite an intense start to the match, Duquesne did not record a shot-on-goal in the first half, while Pitt recorded five.

Even with a three-goal advantage, the Panthers were not ready to take their foot off the gas. Pitt’s attack remained sharp out of the gate in the second half, and a 49th minute corner kick from Petkovic found the head of senior defender Arturo Ordoñez to extend the Panther lead to 4-0.

Soon after, Noel, the reigning ACC Offensive Player of the Year and conference leader in goals, orchestrated a sharp two-man build up play with Petkovic, and notched his first goal of the 2021-22 season in the 56th minute to put Pitt ahead 5-0.

While some of the Panther faithful began filtering out after the fifth goal, the vast majority of the packed Panther crowd still remained to witness perhaps the flashiest goal of the entire match. Graduate student fullback Sito Sena was able to make a defender jump on a shot fake and used his open space to curl a shot into the top left corner to extend Pitt’s lead to 6-0.

After the sixth goal of the match, Pitt’s starting players received a well-deserved rest. Vidovich, nursing a commanding lead, gave some of his rotational players an opportunity to shine in front of the home crowd. Senior midfielder Rodrigo Almeida capitalized on an 89th-minute penalty shot to make the score 7-0, a score the Panthers would ultimately hold until the final whistle.

The nation’s highest-scoring offense looked the part in its first official match of the year. The Panthers finished with 13 shots-on-goal and generated nine corner kicks. The experienced Panthers side will look to expand upon a convincing start when it travels to Morgantown on Monday to face West Virginia.