‘We Not Me’: Pitt football embraces selfless 2021 mantra 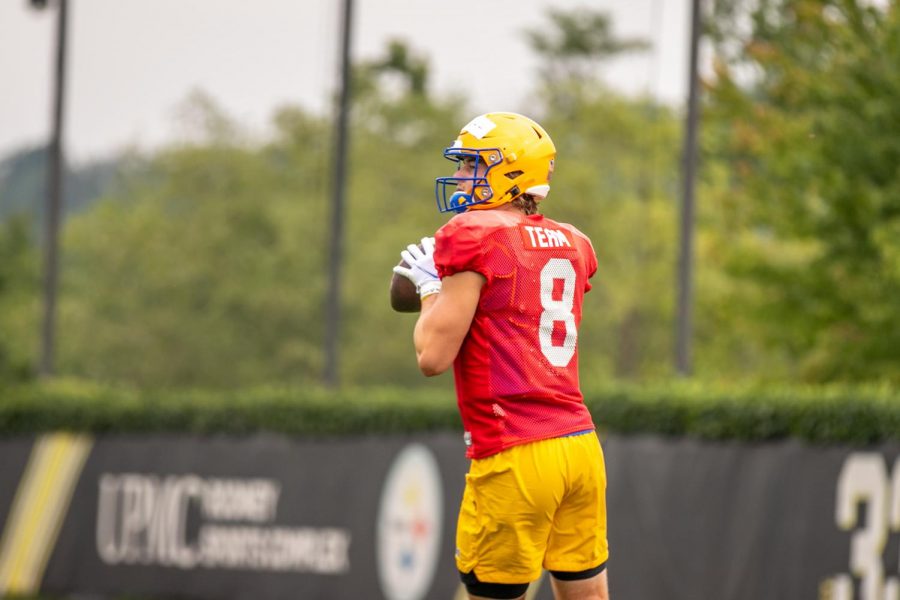 The Panthers wore the word “TEAM” to training camp last Thursday as a tangible representation of their 2021 mantra — “We Not Me.”

By Richie Smiechowski, For The Pitt News

Football is exceedingly team oriented — perhaps more so than any other collegiate sport. Each of the 22 players on the field have a particular job to execute on every snap. While some may be more glamorous than others, if one player fails to do their job, well-designed plays turn to shambles.

Under the sweltering August sun, Pitt football took to the field for their final round of training camp last Thursday — the team’s closing preparations prior to the Saturday season opener against UMass.

While each player’s name, appearance, jersey number and position may differ, there was one constant among each athlete on the field that Thursday and every day of training camp thus far — the word “TEAM” was on the back of their jerseys instead of the players’ last names. The addition is a first for the program and a tangible representation of their 2021 mantra — “We Not Me.” Redshirt senior quarterback Kenny Pickett feels that the newly designed practice uniforms further drill home the new slogan.

“I think that’s where it all comes together,” Pickett said. “Building off each other, trying to take the next step with it — all moving on the same page.”

The Pitt football program used a number of mottos in the past — “Lock the Gates” from the 2018 season was one of the more notable ones. But this year’s motto focuses solely on always putting the team before yourself.

Its inception is timely. It almost directly follows the announcement of new name, image and likeness rules. When asked at an Aug. 19 press conference about how the mantra started, head coach Pat Narduzzi said Pitt football’s leadership council, nicknamed the Eagles, came up with it after the NIL rules were released over the summer.

“It was just being more about ‘we not me’ … I just think the world we’re living in — everyone thinks about them[selves] … Our guys have to focus on when they come through those doors that it’s all about the team — the team comes first,” Narduzzi said.

The challenge for players and coaches alike this year will be finding the balance between self-promotion while remaining dedicated to creating a winning program. Athletes at every school will be enticed by the potential opportunities NIL presents — especially after seeing Alabama sophomore quarterback Bryce Young already eclipse $1 million in endorsement deals.

Although on the surface it seems that the rise of NIL deals in NCAA football are the main reason for the birth of “We Not Me,” redshirt junior defensive lineman Habakkuk Baldonado downplayed its impact. He said players are thinking about the mantra in their NIL opportunities as well.

“[We not me] is one of our main things this year, to put the team first and the well being of the whole team rather than put ourselves first,” Baldonado said. “NIL is a little corner — even with that we can see Kenny Pickett bringing the whole [offensive] line to dinner every weekend, so [we not me] has its little part even in these NIL deals.”

So far, Pickett has reaped the benefits of the NIL deals earlier than anyone else in the program. From taking his offensive linemen out for weekly “hog dinners” at the Oaklander Hotel, to receiving a brand-new GMC Sierra pickup courtesy of Bowser Automotive, he’s had no shortage of success in the new arena.

Regardless of how many endorsements and opportunities the NIL rules provide Pickett, his focus is still locked on the start of the season.

“It’s really just a team mindset — I think it’s one of my favorite mottos that we’ve had since I’ve been here,” Pickett said. “It’s all about the team and I think we have that mindset going into the season … a lot of the team [has] really bought into it so far.”

The wide receivers — now led by first-year coach Brennan Marion — are some of the most public examples of how Pitt is living the mantra. Every day the unit walks on and off the field together.

The new mantra applies to both players and members of the coaching staff according to Narduzzi, who made it very clear that he wants his coaches to stay locked into their current job when asked about Marion’s future.

“Just be in the moment — be the best receiver coach you can, don’t worry about anything else,” Narduzzi said. “Do a great job where you are, and good things will happen — people will come to you … You don’t have to worry about ‘me’ — it’s the same thing, it’s ‘we not me’ for the coaches too.”

Out on the field, problems are solved with a group effort. First-year players are often guided and instructed by more experienced ones, such as redshirt senior wide-receiver Tre Tipton — who once again is taking a leadership role with his younger teammates and uses it as a means of embodying the “We Not Me” mantra.

At practice one day last week, first-year wide receiver Jaden Bradley struggled to catch the ball during drills. Tipton was the first to walk over and offer some advice.

“Just trying to keep him from beating himself — as a freshman, it’s hard to realize that you’ve been playing the game for so long — you’re trying to impress everybody,” Tipton said. “We can’t have no weak links in our room, and I’m making sure that we don’t have any by giving him as much knowledge as I personally have and giving it back to him.”

With optimism for the upcoming season running high, players and coaches hope that this mantra is more than just a rosy life lesson about the collective good. Tipton thinks “We Not Me” will translate into wins as well.

“The team overall is just so close,” Tipton said. “We have the same goals and aspirations as we’ve had in the past, but I think this year is definitely our year.”