Pitt works to make room for largest ever first-year class 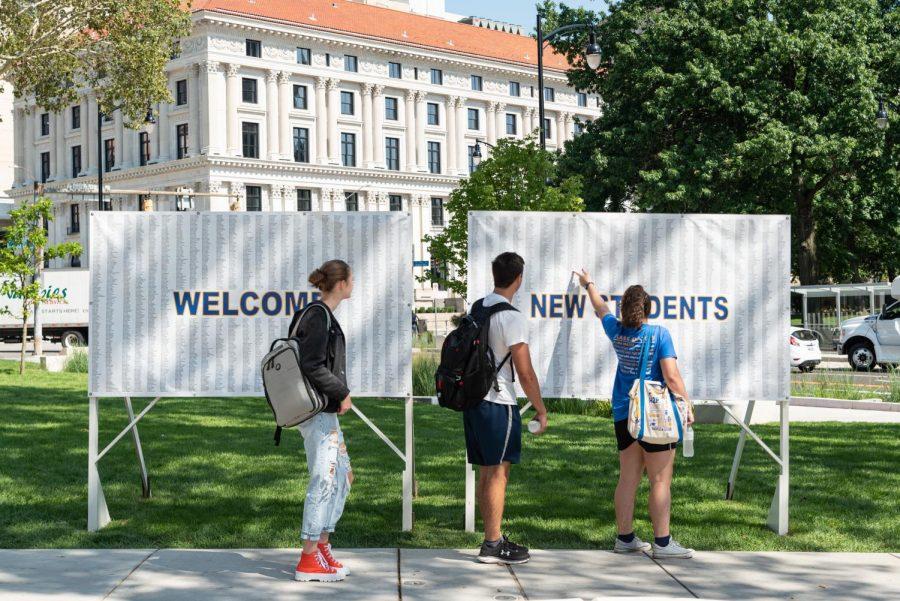 Three students read the sign where Pitt greets its largest incoming class ever this year — a total of 5,195 students.

“You can imagine the effect for us,” Rogers said. “We are a department that thrives on that for early career students, so we’ve opened up new sections for a whole lot of courses. If I had to ballpark it’d probably be 15%-ish more classes across the board at the intro/first-year level.”

With more than 880 students over the goal of 4,315 enrollees, Pitt struggled to accommodate the large class, with departments resorting to hiring new staff and adding new class sections, as well as the University leasing a hotel for housing.

The English department — which has the largest faculty among Dietrich School of Arts and Sciences undergraduate departments — has a handful of classes that first-years typically flock to. Along with seminar in composition, Dietrich students are also required to take two writing intensive courses and one literature course to fulfill their general education requirements — which both have classes that fall within the English department.

“We had to do a lot of hiring over the summer because we just didn’t have enough people to teach the new sections,” Rogers said. “So we hired some new visiting lecturers and we hired some new part-time faculty to come on board and teach more classes.”

While the English department added sections to accommodate increased enrollment, they did not increase the enrollment cap on their classes.

“Most of our classes are writing-based intensives — which are hard capped.” Rogers said. “A professor can not plausibly grade 20% more written essays in the same amount of time. It’s just not humanly possible. It’s going to degrade the quality of instruction and feedback, etc. So we kept the caps the same, we just opened up more sections.”

According to Rogers, the department focused on increasing training and support to the new hires.

“I would say our major investment has just been increasing training and increasing our visibility for orientation,” Rogers said. “That’s where we just basically have to double down our investment and make sure that people we’re asking to come on board and take on new teaching assignments on pretty short notice feel supported and ready to go on day one.”

According to Jonathan Rubin, professor and mathematics department chair, his department saw a similar surge in enrollment and opted to add sections — similar to the English department — though they did push a few classes “above their usual caps.”

“We have some extra sections and more of our classes are at capacity than usual,” Rubin said. “All sections are jam-packed and we have even pushed a few above their usual caps, which we normally do not do.”

While all mathematics classes were assigned an instructor, Rubin said the department struggled to fill recitations with graduate and undergraduate teaching assistants. He said the department completed the process “only at the last minute,” including after classes began.

“This process was only finalized Sunday night — this was after the first day of classes, but luckily there were no recitations on Friday,” Rubin said.

Though some Dietrich departments made notable changes to accommodate the first-year class, the Swanson School of Engineering didn’t have to.

According to Bopaya Bidanda, professor and industrial engineering department chair, his department witnessed a moderate increase in enrollment this year and did not have to make any substantial changes for this year’s first-year class. Unlike Dietrich, Bidanda said Swanson “already operat[ed] to capacity,” as it accepts a limited number of students each year.

“Engineering is a little bit of a different situation,” Bidanda said. “We were already operating to capacity. There’s no absolute hard and fast rule, but we usually have a limit in terms of quality as to how many students we can accept.”

Matthew Sterne, Pitt’s vice chancellor of business services, said housing the first-year class proved to be a challenge. He said that his department pursued “housing expansion options to best serve students” in the spring when it became clear that Pitt anticipated high first-year enrollment.

While he was “unable to detail specific costs” and declined to comment on the exact cost of Pitt’s lease, Sterne said it costs less than Pitt’s $22 million spent on three Oakland hotels to de-densify student housing last year.

Sterne said he is “honored” to support Pitt’s incoming class.

“It was exciting to welcome Pitt’s first-year class on campus!” Sterne said. “We see this year’s enrollment as a testament to the University’s academic strength and appeal, and are honored to provide housing accommodations to support Pitt students.”

Rogers said while accommodating the first-year class was “pretty crazy,” he is excited to see so many new Pitt students.

“We love to see more incoming, more first-year, more early career, more transfer students. That means more students in our classes and more exposure to our professors, who we think are awesome, more of our ideas, more of our material, more of our pedagogy,” Rogers said. “So, for us, this is a net win. Does it require some logistical hurdles? Of course. But we’ll handle that any day of the week. So, it’s good news, and it’s certainly been a pretty crazy August, but … I signed up for the job.”