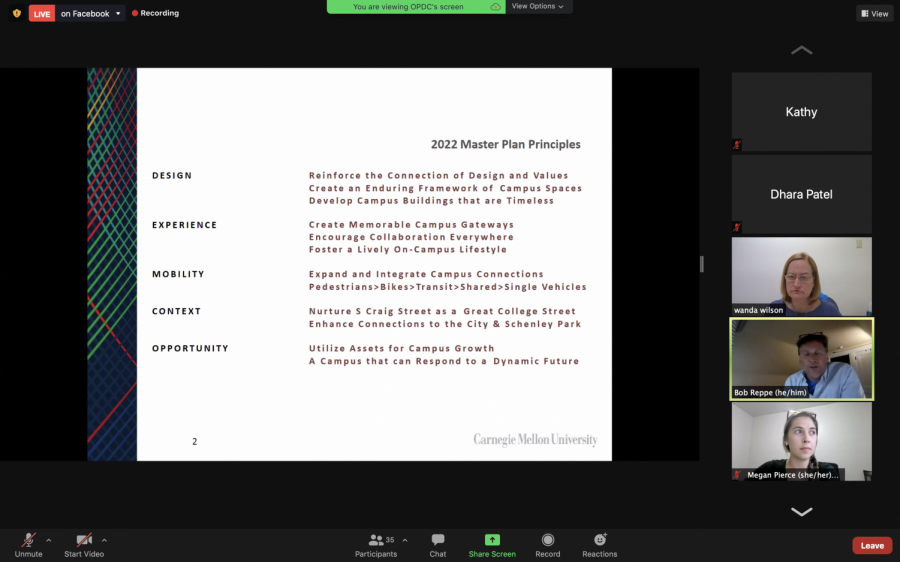 The Oakland Planning and Development Corp. discussed various developments at its August meeting, including a stormwater management plan, Carnegie Mellon University’s Institutional Master Plan and UPMC’s proposal for a new bed tower on the intersection of Fifth Avenue and Atwood Street.

By Dhara Patel, For The Pitt News

The recent increase in rainstorms isn’t just ruining your walk to class — storm water is actually a major pollutant in Pittsburgh’s rivers, and according to Beth Dutton, managing it can improve public health.

“Stormwater is the number one pollutant in urban areas,” Dutton, senior group manager for stormwater for the Pittsburgh Water and Sewer Authority, said. “If we can better manage stormwater, we can reduce the amount of sewage and pollution entering our rivers, which is a public health win for us and our neighbors downstream.”

Besides the PWSA’s stormwater management plan, the Oakland Planning and Development Corp. discussed Carnegie Mellon University’s Institutional Master Plan and UPMC’s proposal for a new bed tower on the intersection of Fifth Avenue and Atwood Street at Wednesday evening’s meeting.

Dutton — accompanied by Rebecca Zito, PWSA’s senior manager of public affairs — said Pittsburgh’s current system is not built to face the impacts of climate change. Pittsburgh has a combined sewer system, meaning both wastewater and stormwater travel through one pipe to the Allegheny County Sanitary Authority. Due to more pavement and hard surfaces, the City’s system is no longer able to effectively combat the threat of stormwater runoff.

To combat the issue, PWSA implemented a plan to update the stormwater management system. Construction and maintenance of drains aim to keep as much stormwater as possible out of sewers, so river basins are not backed up with sewage during storms.

Dutton said PWSA constructed 13 green infrastructure sites around the City to absorb and slow down the flow of stormwater. With several more projects currently slated for design, Dutton said PWSA will need an additional revenue source — the stormwater fee — to help complete the projects.

The PWSA received pushback in response to the fee, specifically from nonprofits or entities that don’t pay for water bills, such as school districts, churches, parking lots or vacant land owners.

Beginning in 2022 and pending approval from the Public Utility Commission, residential property owners will have to pay a monthly rate, according to Dutton. With this revenue, the PWSA will secure the funding necessary to finish its projects, and ensure that stormwater is effectively managed.

The meeting also included a discussion of UPMC’s newest proposal — a bed tower on Fifth and Atwood. According to Mike Scheshler, the project manager, the new tower will house 636 patient beds and include a 450 car parking garage. Schesler also said the building would occupy the hillside directly to the left of the Pitt Public Health Building on Desoto Street.

Scheshler said the distinct architectural choice for an all-glass exterior occurred because research “tells us that patient recovery is improved by access to views and natural light.”

Scheshler also said the glass allows for the building to capture the spirit of Oakland.

Scheshler added that UPMC will prioritize the need for public space and pedestrian accessibility. The ground floor of the proposed building includes a Lifestyle Village, complete with restaurants, fitness suites, garden terraces and spiritual centers. He said construction for the project is slated to start in summer 2022, with an active facility hopefully opening in fall 2026.

On the opposite side of Oakland, CMU discussed its Institutional Master Plan, which aims to construct, renovate and maintain spaces on CMU’s campus, according to Bob Reppe, senior director of planning and design at CMU. The plan is split into four different districts on Carnegie’s campus — the Historic Core, North Campus, South Craig Street and Schenley Park.

Reppe said renovations within the Historic Core aim to introduce new academic buildings, while maintaining the architecturally significant corridor built in the 1900s. Within North Campus, Reppe said CMU is prioritizing an increase in housing space to ensure on-campus housing for all undergraduate students.

In the South Craig Street district, Reppe said the Master Plan aims to maintain and expand upon the mixed-use nature of the area, as well as both the academic buildings and the denser urban areas for permanent City residents.

Reppe also said plans include a new anchor building — a structure serving as a central hub for all University scientists. Despite the planned addition of a major academic building, Reppe said the University still prioritizes South Craig Street’s accessibility.

“Mobility goals define all of the University’s plans,” Reppe said. “There’s a whole host of ways that we want to accomplish this, including improving pedestrian pathways and connections, adding bicycle amenities and working with our institutional partners to develop shared shuttle systems.”