No. 3 men’s soccer back in win column with 2-1 victory vs. Lehigh 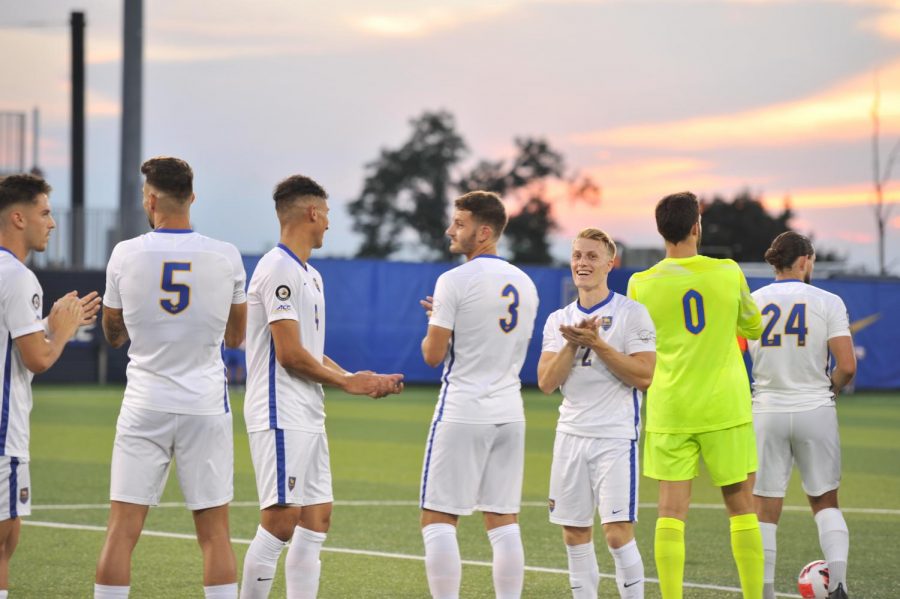 Carlo Zollinger | For The Pitt News

No. 3 Pitt men’s soccer, pictured here at last Thursday's game against Dusquesne, convincingly regained form in a 2-1 win over Lehigh in front of a packed home crowd Friday night at Ambrose Urbanic Field.

Following an upset loss to a seasoned West Virginia squad in Morgantown, No. 3 Pitt men’s soccer convincingly regained form in a 2-1 win over Lehigh in front of a packed home crowd Friday night at Ambrose Urbanic Field.

Pitt controlled possession from the opening whistle, but despite a few promising looks in the attacking third, the Panthers could not quite muster a quality shot attempt. Regardless, Pitt’s desire to control play was reflective of the message head coach Jay Vidovich sent to his team heading into the match.

“The biggest thing we’re looking for is a change in mentality,” Vidovich said. “A more assertive posture to control the game more, just trying to attack more and defend higher and more aggressively.”

The first shot on goal in the match came from the Mountain Hawks, after a rare giveaway from Pitt’s backline resulted in a breakaway chance for Lehigh. Fortunately for the Panthers, graduate student goalkeeper Nico Campuzano made an acrobatic save in the 13th minute to keep the score knotted at 0.

As the first half progressed, Pitt gradually applied more pressure on Lehigh goalkeeper Noah Sutherland. Sophomore winger Bertin Jacquesson was awarded a free kick opportunity in the 31st minute, which nearly gave the Panthers their first goal, but instead bounced wide off of Sutherland’s gloves.

While the next several minutes of play were rather neutral, Pitt refused to enter the halftime break without a goal. Sutherland made two consecutive acrobatic saves in the 44th minute, preventing a powerful header from Pitt senior midfielder Rodrigo Almeida and a subsequent shot from junior midfielder Veljko Petkovic from finding the back of the net.

The final minute of the half was when the Panthers finally opened the scoring. Sophomore midfielder Filip Mirkovic played a ball down the right sideline to graduate student fullback Jasper Loeffelsend, who rocketed a grounded cross to the feet of Petkovic for a tap-in finish.

After generating 10 total shots and five corner kicks in the first half, Pitt broke through in the 45th minute to take a 1-0 lead into halftime. Vidovich gave insight after the game as to why it may have taken the whole half for his team to get on the board.

“It was a game with a lot of anxiety, and impatience perhaps,” he said. “They were nervous while they were playing because, well, they haven’t lost that much, so I think after taking the loss there, it took them a while to find themselves tonight.”

The second half began much like the first –– while the Panthers were in full control of possession and pace, they could not quite manage to get shots on goal. But Almeida took an ambitious shot in the 76th minute from a few yards outside the 18-yard box, and buried it into the bottom-left corner. In the blink of an eye, Pitt doubled its lead and extended its advantage to 2-0.

While the Panthers seemed poised to cruise to the final whistle with a two-goal lead, the Mountain Hawks snuck a ball past the Pitt backline and struck back with a goal of their own in the 86th minute. Lehigh senior forward Bratislav Petkovic, the brother of Pitt’s Veljko Petkovic, matched his sibling with a goal of his own in the match. Vidovich cited mental lapses throughout the match as the main reason for letting up a late goal.

“I just thought there were some mental lapses by our guys,” Vidovich said. “The concentration wasn’t there, it wasn’t sharp enough to make the big play.”

Pitt suddenly found itself clinging to a one-goal advantage with four minutes to play, but managed to hold off a late push by the Mountain Hawks, and come out with a 2-1 victory. Despite the one goal margin, the Panthers out-shot Lehigh 16-5, and never truly lost control of the match. Vidovich was appreciative of the challenge his team overcame in the win.

“We ran into a worthy opponent who challenged us early, and it wasn’t easy,” he said. “It was the test we needed.”

After securing a bounce-back win, the Panthers will face a more formidable test in the No. 19 Akron Zips on the road Monday at 7 p.m.