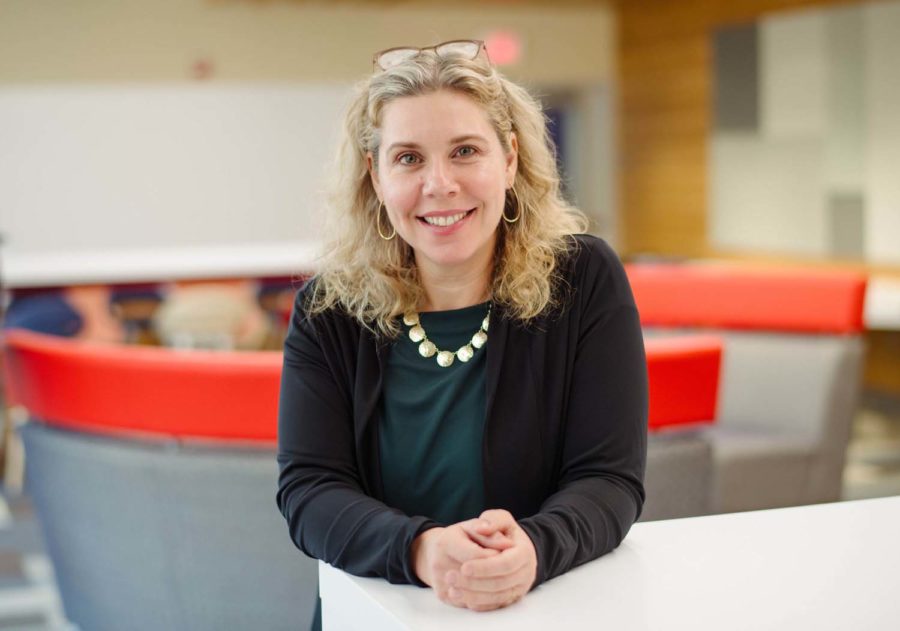 Jennifer Murtazashvili is an associate professor and the director of the Center for Governance and Markets. A project at CGM is assisting Afghans obtain P-2 visas for resettlement in the United States after Kabul fell to the Taliban.

The week after Kabul, the capital of Afghanistan, fell to the Taliban, many Afghans urgently wanted to obtain Priority 2 (P-2) visas to resettle in the United States. On the other side of the world, Maxwell DeGregorio received email notifications every 30 seconds from eager Afghans hoping for assistance with the visa process.

How’d they find DeGregorio? A tweet from Jennifer Murtazashvili, a Pitt associate professor and director of the Center for Governance and Markets, shared a project she began as a favor to friends. The CGM-based project connects Afghans to organizations they previously worked for in the US to apply for a P-2 visa.

“Sunday [Aug. 15], Kabul fell to the Taliban, and then Jen’s tweet went viral with our email addressing that we would help people,” DeGregorio, a second year student in Pitt’s Graduate School of Public and International Affairs and current project leader, said. “That morning I woke up and the CGM had 700 emails from Afghanistan. But we also had maybe 70 emails from members of the Pitt community that said ‘Hey, we want to help out.’”

The P-2 visa is specifically for Afghan refugees that worked for the U.S. government, an American NGO, a media organization or a contractor of the U.S. government, so that they could evacuate. But it comes with many caveats — requirements include proof of employment, which, for many Afghans, is difficult to obtain. Many companies that employed Afghans dissolved over the course of the 20-year war. Another hurdle is an active U.S. government official must refer the Afghan into the P-2 visa program.

Murtazashvili, an associate professor at GSPIA, is “a scholar of Afghanistan,” previously working for the Peace Corps and U.S. Agency for International Development in Uzbekistan. She helped deliver the first shipments of humanitarian aid into Afghanistan even before the war started while working in the US Embassy on 9/11. Because of this experience, her network of contacts reached out to her for help.

The project originated in early August from Murtazashvili’s extensive network in Afghanistan — after the United States announced the P-2 program, friends reached out to Murtazashvili asking for help obtaining work verification letters. While she began doing the work on her own, word spread rapidly, with more than 40 people contacting her, which is when she brought on DeGregorio.

Moving slowly but steadily, DeGregorio worked with a few other students — until Kabul fell and the requests piled up rapidly. This mission developed into a primarily volunteer-led effort — boasting 70 consistent volunteers with new members onboarded every day — and is currently managing 250 cases. The project gained an outpouring of support, most recently a $25,000 grant from the Hillman Foundation. DeGregorio said the grant will help sustain the project’s mission.

“We were able to use that grant to hire some of our Pitt students that were working as volunteers and the person that was in the human resources onboarding role,” DeGregorio said. “We’re very fortunate. With the $25,000, it’ll be able to help us sustain this over six months.”

DeGregorio said volunteers primarily use social media like LinkedIn and Facebook to find previous employers that could provide documentation for each Afghan.

“We give each volunteer a case [who] gets their information, like ‘This is the company I worked for, this was a U.S. government official that was affiliated with my project,’ and we just try to find them,” DeGregorio said. “We go on LinkedIn, we go on Facebook, we go on company websites and ‘contact us’ pages.”

This cold calling is to get proof of employment or a contact in the State Department — and it is working. DeGregorio said two weeks ago, they were able to successfully get 20 individuals into the P-2 visa program.

“We have no experience. I study monetary policy. I don’t study human rights or human security,” DeGregorio said. “We probably have more [applications getting in] this week, I’d say closer to 35 or 40.”

One of these volunteers is Tahmina Ahmed, a master of public administration candidate at GSPIA, who joined the team after receiving an email from Murtazashvili calling for volunteers. She said it was “quite overwhelming” at first to be receiving emails calling for help.

“Every day I’d get at least two or three emails saying ‘What’s the status?’ or ‘Is there anything else that you can do?’” Ahmed said. “It takes so much time because you can’t rely on people emailing you back as quickly as you’re emailing them.”

But Ahmed said just one response by email feels like an accomplishment.

“When you get a reply back from the person that you’re trying to get in contact with, you feel a little bit of accomplishment because you know you’re getting somewhere,” Ahmed said.

Ahmed shared the story of one of her cases — the Afghan requesting help worked as an intern for USAID and was in a Women in Government program.

“I had a lot of faith for her because she had all of the right documents, I got in contact with the right people and it took about a week to finally get a response,” Ahmed said. “Once I got that response, I was like, ‘Okay, this is getting somewhere,’ and all we needed was the HR verification letter.”

She later found out the project the Afghan worked under was funded by a different company — not USAID — so that led to a different contact.

“It was very stressful, but I finally got the letters, and I was able to submit her application,” Ahmed said. “The success story would look like that person receiving a call and saying we’re getting transportation for you and your family to come to the airport.”

Anyone who reaches out to the CGM email receives an automatic reply linking them to a form, which they can fill out with personal contact information, specific employment records and ties to government agencies. Volunteers use this information to begin assisting them with the visa application process.

Murtazashvili said the project’s rapid growth demonstrates the “[disorganization]” of the U.S. government.

“People are coming to us asking questions, and so many people came to me with the same question over and over again — ‘How do we get this work verification? How do we apply?’” Murtazashvili said. “And they’re smart, educated people. I’m like, ‘Something’s not working.’ It’s great to see the students doing this, but these rules have to be changed because this is way too complicated and not sustainable.”

She said students should not have to do this “heroic” work and that the process must be “simpler.” Fielding calls from Amnesty International and other big NGOs involved in humanitarian aid, Murtazashvili hopes “there is some attention to the policy side as well.”

Murtazashvili’s long-term vision for this project is creating a community for Afghan colleagues and academic scholars in Pittsburgh. She said there is already one scholar — whose identity she kept anonymous due to his current refugee status — who the University already received funding to host.

“He’s a very prominent thinker in Afghanistan, very prominent, public intellectual thinker on political issues, and definitely a target of the Taliban, so he’ll be coming here,” Murtazashvili said. “We’re really excited to have him and his family join us. I would like us to be a hub for these scholars and these thinkers, so that they don’t have to give up their entire identities and start anew, that there’s a place for that here in Pittsburgh, and that we have an intellectual community that can sustain them so they could pick up right where they left off.”

Murtazashvili said the project started with a call on Twitter but escalated to nonprofit status.

“I think we’ve just started a nonprofit. We didn’t try, but we’ve done that. I’ve got to say that I’ve never seen anything like this at Pitt, among the students and faculty and staff who’ve volunteered,” Murtazashvili said. “It means so much to them. For people who’ve never been to Afghanistan, it blows me away — just this kindness and desire to help strangers in difficult situations.”

If you are interested in becoming a volunteer, email [email protected] and follow the link in the automatic reply to indicate your interest. If you are in need of assistance with the P-2 application, reach out to [email protected] with your full name, name of U.S.-supported organization you worked for in Afghanistan, name of the project and dates of employment.