After transferring and changing positions, John Petrishen sets out to prove himself right 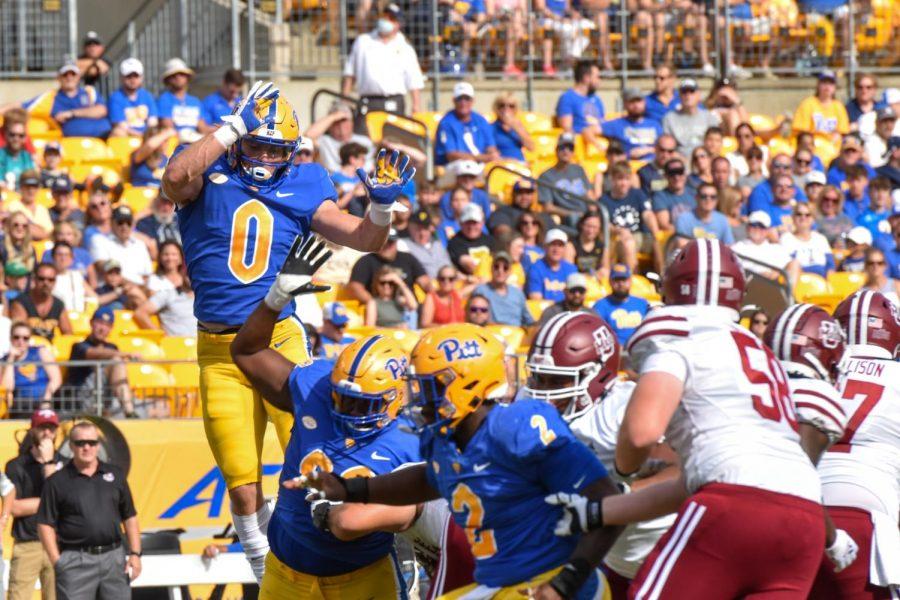 Seventh-year John Petrishen left Pittsburgh to pursue a career as safety at Penn State. But Petrishen, pictured on the left, came home to Pitt, this time as a linebacker.

Redshirt senior linebacker John Petrishen flew past the UMass offensive line untouched, with his eyes set on the quarterback. Like a heat-seeking missile, Petrishen lowered his shoulder into the quarterback’s back and drove him into the turf. The seventh-year stood up and let out a triumphant scream, and held up his hands in the shape of a zero — his uniform number — to celebrate.

LB John Petrishen was EVERYWHERE on Saturday to begin his seventh season of college football.

After a true rollercoaster of a college football career, Petrishen looked into the sea of blue and gold at Heinz Field and felt vindicated.

But back in high school, Petrishen wasn’t sure joining the Pitt football program was the right fit.

“‘John Petrishen, you’re going to be the next great, star linebacker at Pitt,’” Petrishen said former Pitt linebackers coach Rob Harley told him when he was a high school recruit.

Then three-star high school safety Petrishen thought about what the recruiter told him. He had the opportunity to solidify himself as one of the greatest defensive players in a city that prides itself on hard-nosed and gritty defenses.

Petrishen was no stranger to this culture, either. He was raised in Pittsburgh and played safety for nearby Central Catholic high school, where he was named to numerous All-State defensive rosters. Petrishen grew up attending Pitt games at Heinz Field — from the outside looking in, it seemed like a no-brainer for the homegrown kid to write a fairytale ending with his childhood team.

But something about what Harley told Petrishen didn’t sit right with him. It was one word in particular — linebacker.

“I hated to hear that when I was getting recruited because I wanted to play safety at the time,” Petrishen said.

Petrishen played safety in high school, and that’s where he wanted to play at the next level. The high school senior decided on Jan. 31, 2015, to commit to a program that recruited him as such — the in-state rival Penn State Nittany Lions.

The Pittsburgh native arrived at Penn State ready to prove to various programs who tried to convert him to a linebacker that he could be an impact player at the position he so badly wanted to succeed at. But things didn’t go as planned with the Nittany Lions.

Petrishen redshirted his first year and watched from the sidelines — waiting to get his chance at safety in Happy Valley. That chance wouldn’t come the next year in 2016 either after he missed the entirety of the season due to injury. But in his third year with the program, Petrishen finally had health on his side.

Petrishen’s opportunity to start at safety never came, as he primarily served as a special teams player. It was much of the same in 2018, and after an underwhelming career at Penn State, Petrishen entered the transfer portal. Pitt head football coach Pat Narduzzi, who had tried to pull in Petrishen just a few years earlier, scooped up the former Nittany Lion and brought him back to where it all started.

“We got a new addition to our roster today,” Narduzzi said at the time. “We got another graduate transfer in. John Petrishen has stepped in, the old Central Catholic player. We’re happy to have him here. He’s got two years left of eligibility and I think he’ll be a great addition to the football team.”

Coming off of a shoulder injury, Petrishen didn’t play with the Panthers until a few weeks into the 2019 season. When he did, it was not at safety, but as a special teams player. It would have been easy for Petrishen to feel sorry for himself and not be a good teammate after things didn’t go the way he wanted. But that’s not who Petrishen is — he always wanted to see those around him succeed.

One of the most telling signs of Petrishen’s character came in a game he did not suit up in — the week three matchup with his former team, the Nittany Lions.

Petrishen seems to have impacted his teammates at Pitt in the same way. Fellow seventh-year wide receiver Tre Tipton, who is open about his battles with mental health, mentioned how important it is to have a strong group of people to turn to and that Petrishen is one of his closest allies.

“My boy JP, I talk to him a lot [when I’m down],” Tipton said. “Having teammates and having a strong tribe is one of the things that I talk about. I built my tribe over time to understand what I’m going through.”

He may have had his teammates’ respect, but one thing he didn’t have at Penn State was gratification — he was so busy trying to prove other people wrong, he forgot to enjoy the game he once loved. Petrishen adopted a new mindset after joining the Panthers.

“When I have fun, I play better,” Petrishen said. “I realized that for a long time in my career I was focused on proving other people wrong and I wasn’t having fun by doing that. So I tried to change my mindset to ‘prove myself right’ and the people who support me right. I think that’s changed my mindset and [it has] reflected on the field.”

After serving a valuable role for several years as a teammate, Petrishen is ready to get it done on the field. Ahead of the 2020 season, Petrishen decided he would finally make the move to linebacker in hopes it would help him get on the field. While still learning the position, Petrishen served as the backup but was productive when he made his way into the game.

In a season shortened due to the COVID-19 pandemic, Petrishen registered twelve tackles, two of which resulted in a loss of yardage. And although it was nice to get playing time last year, Petrishen said this year is his first at Pitt with a full year of camp, and he expects to see that translate to the field this season.

“This is really my first full camp here,” Petrishen said. “This is really only my third camp I’m actually healthy and participating in in my career. I love it, I’m not worn out yet.”

The full camp and position change paid dividends in Pitt’s first game against the UMass Minutemen. Petrishen, or “Agent 0” as some on the team call him, led the Panther defense in both tackles and in sacks.

Petrishen spent much of his college career searching for a niche and now that he’s found one with Pitt’s linebacking group, the seventh-year feels he’s ready to make a splash in his last go-around on the gridiron.

His ride through college football may have had plenty of major ups and downs, but it doesn’t seem Petrishen regrets how things shook out. After all, he’s back where it started — trying to become Pitt’s next star linebacker.

“Things worked out the way it did and I think it’s a perfect fit for me,” Petrishen said. “I feel like it was meant to be. I love this position and I wish I did it earlier because I’m having a lot of fun.”