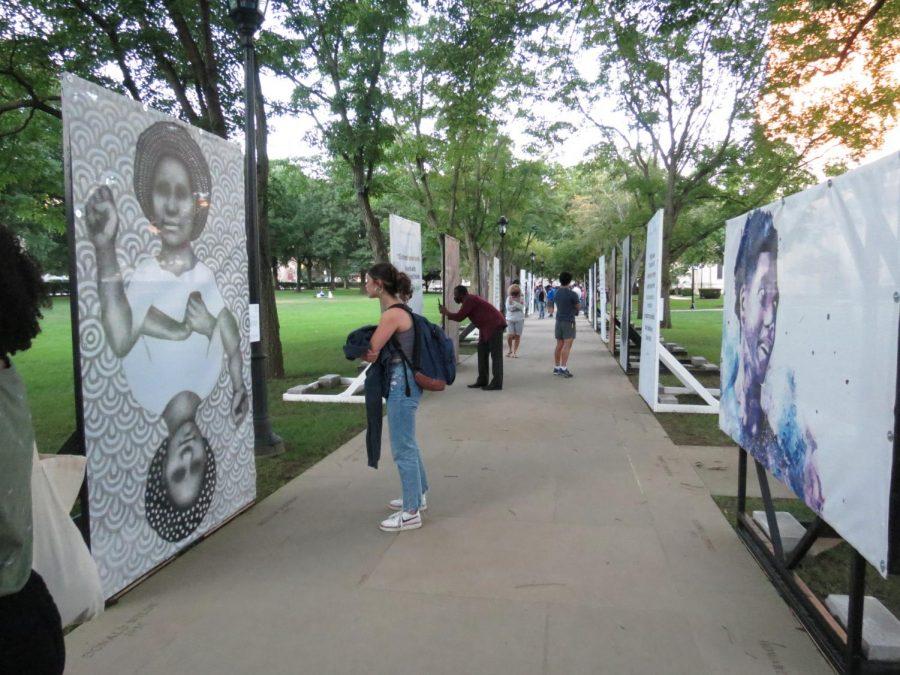 The Black Lives in Focus initiative aims to celebrate and showcase Black lives, voices and experiences in an engaging and direct way. As part of one of their exhibitions, various artwork is now on large scale display along the Omicron Delta Kappa walkway of the Cathedral lawn.

A bright blue and purple painting of Antwon Rose II, titled “Justice for Antwon” and created by visual artist Morgan Overton, stands tall on the walkway of the Cathedral lawn. Near it is a collage, featuring a Black couple cheerfully dancing in bell bottoms titled “Newspaper Collage (Joy)” by multimedia artist Ada Griffin.

Reproductions of these artworks, as well as many others, are now on large-scale display along the Omicron Delta Kappa walkway of the Cathedral lawn, the space between the Cathedral of Learning and Heinz Chapel.

The art exhibition, which is free to the community, started Thursday and will run through Sept. 23. The art pieces range from collages to paintings, and even feature large prints of poems. The Carnegie Museum of Art will feature some of the works after their run on campus.

The exhibition is a part of the Black Lives in Focus initiative, which aims to celebrate and showcase Black lives, voices and experiences in an engaging and direct way. Pitt theatre arts professor Bria Walker and Sylvia Rhor Samaniego, director of the University Art Gallery, serve as co-organizers of the initiative.

Pitt’s Black Action Society partnered with the organizers to bring the exhibit to campus, according to BAS president Destiny Mann. She said the organization brings together Black students not only on Pitt’s campus, but also in the broader Pittsburgh community as demonstrated by the success of the event.

“We are an organization that is meant to uplift Black students at this university,” Mann said. “We’re here to address the educational, social and political needs of Black students here, in the branch communities and in the greater Pittsburgh area.”

According to Mann, much of the club’s involvement on campus centers around bringing in speakers and having town halls, campus events and volunteer services.

The Black Senate — a coalition of Black organizations on campus, including BAS — made numerous demands to the University last year, including amplifying the Black student voice, increasing the number of Black students and faculty, curriculum changes, additional training for employees and Pitt police reforms. One of the many demands was to promote the work of Black artists. Mann said those demands, coupled with the ongoing Black Lives Matter movement, really helped to bring the event and initiative to life.

“[The exhibition] is a fruition of all the effort that past student leaders have done and what we’re currently doing,” Mann said.

Luis Zul, a 24-year-old Pittsburgh resident, visited the exhibit after hearing about it from a friend involved in the opening. Zul enjoyed the exhibition’s art and was struck by the diversity of art mediums.

“The source ideas for these works are very unconventional, like one of them is from a database of health issues disproportionately affecting Black women,” Zul said.

Zul said the exhibition presents a great opportunity to talk with a friend and gain different perspectives. The art sparked a conversation with a friend about how skin colors are described in different cultures. A native of Mexico, Zul said words used to represent a group of people are often considered complementary, whereas in the United States, they aren’t always used in a positive light.

“We saw in one of the descriptions ‘Black and brown people,’ and we started talking about how in Mexico, calling someone ‘morenita’ can actually be endearing,” Zul said. “But predominantly in the U.S., whenever there’s a word for a specific group, it’s always with a tone of aggression or oppression.”

Jamar Thrasher, a Pitt alumnus who graduated with a degree in political science in 2011, remembered his experience at Pitt as one that really emphasized and was filled with the arts.

“Just being in Pittsburgh, a ton of writers visited, like Maya Angelou and George Saunders,” Thrasher said. “There’s just a lot of appreciation for art, and I really enjoyed that.”

Thrasher said one of the highlights of the exhibition was how it pulled so many different parts of the community together, from the organizers to the artists themselves.

“This event is a great assurance that art remains vibrant among the community and among students — that’s really important,” Thrasher said.

Every art piece is the work of a Pittsburgh-based artist and includes a plaque that features the artist’s biography and description of the work.

Zul said he wished there was a mention of how much the artists were getting paid, as the financial inequalities between white people and Black people remains an ongoing issue.

For Thrasher, the exhibition is the perfect way for Black voices to be heard in a public and popular space. He said the massive display really forces people to stop what they’re doing and take a look.

“This event is vitally important because it gives a platform for these artists,” Thrasher said. “It especially underscores the need to showcase art that tells stories that need to be told.”

This story has been updated to reflect that Walker and Rhor are co-organizers of the initiative.