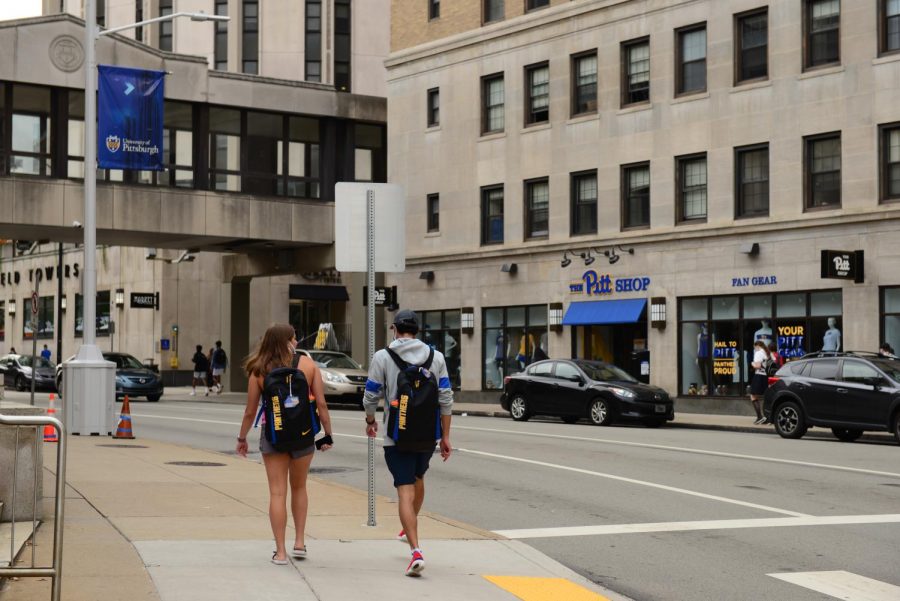 While many students are excited to move to fully in-person classes starting Monday, not everyone agrees. Brennan Williams-Howard said he sees this decision as “gross neglect” due to the number of COVID-19 cases on campus.

“For them to kind of just rush and abruptly say OK, you’re going back to class full send, I think it’s kind of dangerous,” Williams-Howard, a junior finance major, said. “Even though the vaccine levels are up, I mean there’s different variants that make the vaccine less meaningful.”

When the University announced a two-week optional online period, many students reacted with trepidation over another semester online. Now, as that period comes to an end, students are experiencing a variety of feelings about mandatory in-person classes.

Williams-Howard said he wants the University to allow students to choose for themselves when they feel comfortable re-entering classrooms physically.

“I think a more gradual approach to getting people back to class and the optionality of OK, we can still do this over Zoom because it’s not that much of a burden to just have it on Zoom and in class like a hybrid method,” Williams-Howard said. “If they want to make their decision whether it’s safer for them or not, they should make the decision on their own and then come in accordingly.”

But other students, like Rocco Condenzio, expressed excitement about the return to in-person learning. Condenzio, an undeclared first-year, said he went to in-person classes whenever he got the chance since the semester started.

“Every opportunity I have to go in person I’ve been going in person,” Condenzio said. “I’m vaccinated and we’re wearing a mask and if I get sick I get sick. It’ll pass. I’m young and healthy and I can handle it.”

Condenzio said he dislikes online learning, and he thinks it’s time to take the leap back to in-person classes.

“I’m excited because the end of my junior year in high school was all virtual, and then my senior year we did hybrid, but I can’t learn virtually,” Condenzio said. “I think now’s the time to go in person. I think if we keep holding back for every new variant it’s going to be forever so we just have to just power through.”

Other students, such as junior Summer Victory, aren’t entirely sold on the safety measures — such as social distancing and a mask mandate — in place. She said she has “mixed feelings” about in-person classes.

“I personally am a lot more productive with in-person classes,” Victory, a biology and neuroscience double major, said. “I think it’ll be interesting though, once you have to be back in person starting [Monday], to see how well social distancing and stuff like that is actually enforced and if we have students that are trying to fight that.”

Victory clarified the benefits she sees in online learning.

“I focus a lot better when I have other people around me,” Victory said. “It holds me accountable more for paying attention. It’s a lot easier to do other things when you’re on Zoom and can have your camera off.”

Students like Jaydep Halder, a first-year neuroscience major, said the University should keep online open as an option, although he personally prefers in-person.

“I definitely prefer in-class learning, but I would say, I think it’s beneficial to have some online format to classes. Not only for the people that can’t be in class but it kind of reduces the pressure to always attend class and be present even when you’re maybe not feeling the best,” Halder said.

But Isip said she feels safe moving back in person.

“I really like going back in person. I think it’s a lot easier for me to learn because when learning from home it’s just so easy to get distracted. And I like when being in person you can collaborate a lot better and make more friends,” Isip said. “I’m vaccinated and I’m healthy and I feel like all students are pretty healthy and we’re all mainly vaccinated,”

“If it’s a large 300-person class, then I feel like there’s a bit of a risk involved, but I’m not too worried, given that most students on and off campus are vaccinated,” Lynch said.

But Lynch also said she feels that the University’s timing on this change could have been better.

“I am a little bit skeptical of how they made the two-week thing the same as add/drop. Because now they have a lot of power to be like, ‘Oh, two more weeks online’ and you can’t drop your classes without withdrawing. So I thought that was kind of sneaky of them,” Lynch said.

Lynch said she has a mixture of emotions because of this transition.

“I’m kinda stressed, because there’s a different workload involved with in-person classes,” Lynch said. “But also happy, because I feel like in-person classes kind of provide a more structured setting for classwork. So it’s a mixed bag.”