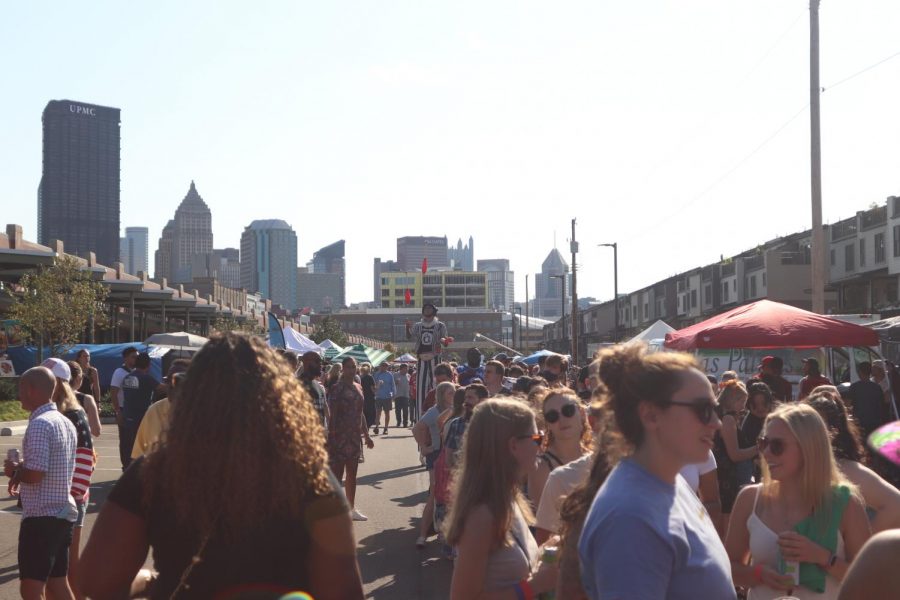 Pat Cavanagh | For The Pitt News

​​The Pittsburgh Taco Festival, held Saturday at the Strip District Terminal, is an annual celebration of all things taco. The festival had over 25 different food trucks and vendors, each selling their own culinary takes on tacos and other Latin American food.

It’s hard to find someone who doesn’t like tacos. Whether they are made with corn, flour, chicken, steak, pork or beans, these savory and mouthwatering dishes deserve to be celebrated — and one festival in Pittsburgh does just that.

The Pittsburgh Taco Festival, held at the Strip District Terminal, is an annual celebration of all things taco. The festival was held from noon until 7 p.m. Saturday, and had more than 25 different food trucks and vendors each selling their own culinary takes on tacos and other Latin American food.

According to the event website, Craig McCloud founded the festival in 2016 to create an opportunity that benefitted food trucks and start-ups. The festival also partners with the Pittsburgh Hispanic Development Corporation and the Latin American Cultural Union, and in turn, they receive a percentage of the net proceeds.

Jesus Martinez, Greenfield resident and owner of La Palapa, said the South Side restaurant had not one but two different stands at the festival. These included a food truck with tacos, quesadillas and empanadas as well as a stand-alone tent with birria and churros.

According to Martinez, his restaurant’s traditional, Mexico City-style cuisine differentiates his truck from other vendors at the festival.

“For example, birria, which we make with short ribs, you don’t really find it when you’re in Pittsburgh, but it’s something that people in Mexico eat all the time,” Martinez said.

La Palapa’s birria was such a hit that it sold out at about 5 p.m. Zoe Yarsky, a senior at Pitt studying industrial engineering, found this out the hard way.

“When we came here we wanted the birria tacos so badly, and so we waited in line for them,” Yarsky said. “And once I was second in line, they said that they only had ground beef left, which basically ruined my day.”

Food trucks and stands were lined up and down both sides of the terminal’s parking lot with a stage in the middle for performances.

Along with food vendors, the festival featured local artists and live musicians, such as pottery store Linzy’s Macetas and a lively performance from Latin Fusion band Gavas Beat.

For Chris Kirchin — a 2021 Pitt nursing graduate, who is originally from South London, U.K. but resides in Shadyside — the festival was a great way to try out some of what Pittsburgh’s taco scene had to offer.

“I lived in Texas for a little while, and I was excited to come here to get to try some authentic Mexican tacos again,” Kirchin said. “Some of these food trucks are fantastic.”

In addition to the tacos, Kirchin said he appreciated the local artists at the festival as well. Some artwork included drawings by Zev Woskoff, pottery by Linzy’s Macetas, and face paintings by Beanie Paints LLC.

“Walking down the terrace, there were some very cool artists with fantastic pieces, and most were for brilliant prices, so I genuinely thought about picking up a couple,” Kirchin said.

Kirchin wasn’t the only attendee impressed by the artists at the festival. Emma Schuszler, a senior studying industrial engineering, said she was pleasantly surprised by the ambience of the event.

“Maybe I just should have read the flyer better, it probably advertised it, but I didn’t know there was going to be music,” Schuszler said. “I thought that that added a lot to the experience— the atmosphere was on point.”

Although the festival had a multitude of vendors and artists, there were some logistical downsides to the event according to Rachyl Rackin, a senior bioengineering major.

“I felt like it was kind of an expensive cover fee,” Rackin said. “And the alcohol was very expensive. It’s like $8 for any type of alcohol. And also, the tacos are expensive and the lines are long.”

Because of this, Rackin said she didn’t have the “ultimate taco experience,” but still had a good time overall.

For Martinez, the festival provided a great business opportunity and exposed the Pittsburghers to new dishes.

“The visibility we get here is great marketing,” Martinez said. “We make good sales, but also people get to try foods that you wouldn’t find anywhere else in town.”