Panthers stay undefeated with commanding 3-1 victory against No. 12 BYU 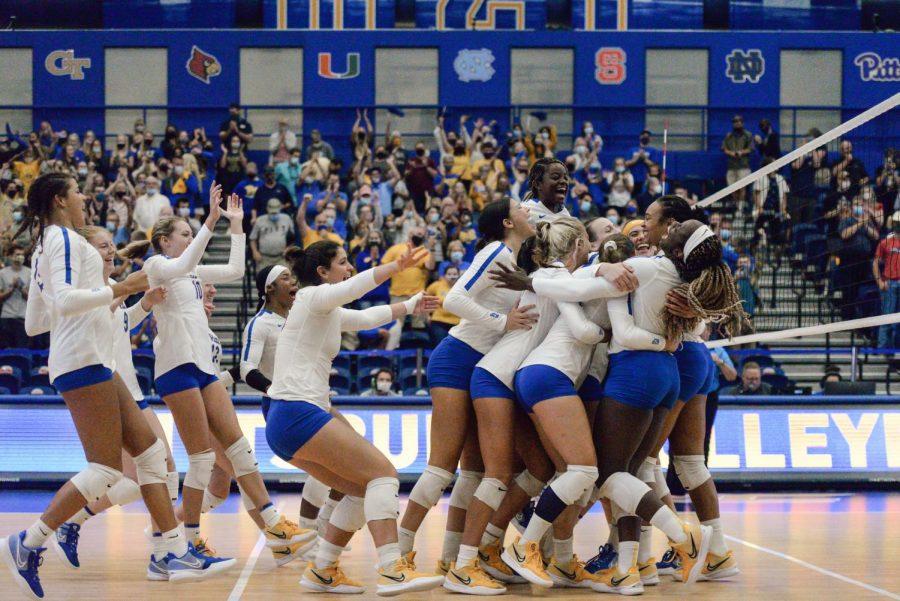 On Friday, the Panthers celebrated after extending their winning streak with a 3-1 victory at home over No. 12 BYU. It was their second victory of the day in the Panther Challenge, hosted this weekend by Pitt at the Fitzgerald Field House.

So far this season, No. 4 Pitt (8-0, 0-0 ACC) tallied four wins over ranked opponents. On Friday, the Panthers extended their winning streak over such foes with a convincing 3-1 victory at home over No. 12 BYU (8-1, 0-0 WCC). It was their second victory of the day in the Panther Challenge, hosted this weekend by Pitt at the Fitzgerald Field House.

BYU came into the battle of the undefeateds boasting a 7-0 record, winning 21 of 23 sets. But Pitt had the advantage in strength of schedule. Half of Pitt’s wins came against ranked opponents, and BYU’s slate consisted of only unranked teams.

The first set looked to be BYU’s early, but the Panthers stormed back and took a 22-18 advantage late in the first frame with a 12-3 scoring run. Fifth-year senior right-side hitter Chinaza Ndee led the way with four kills on nine attacks. She credited the rest of her team for their contributions to her early success.

“Volleyball’s such a team sport, you need someone to pass it, you need someone to set it,” Ndee said. “I think it helps just being in a good rhythm and knowing that if I don’t get the job done, someone else will, and that gives me the freedom to play my game and not feel like the weight of the world is on my shoulders.”

The Panthers’ explosive run came when the team was down 15-10 — sparked by the Cougars’ fourth service error of the set. Those mistakes ultimately cost them the game. Senior middle blocker Sabrina Starks provided a timely kill and block on back-to-back points late in the set to put the Panthers up three points. The Panthers eventually won the set 25-21, aided by the Cougars sixth service error of the frame.

The second set was a back-and-forth affair at first, with both teams trading points until meeting at a 9-9 tie. However, the Cougars’ attack proved to be too much. They tallied 18 kills on a .386 hitting percentage, while the Panthers could only manage 14 kills on a .182 hitting percentage. Attack errors proved costly to the Panthers as well — they made six in the frame. Sophomore outside hitter Heather Livingston was dominant at the net for the Cougars — notching seven kills in the set.

The Panthers dropped the second set 21-25 behind separate three- and four-point runs for BYU. Pitt was also fueled by a dominating performance at the net.

The third set was close, with each team exchanging the edge early. The set featured nine ties and four lead changes. But the Panthers came on strong down the stretch, never losing the lead after a 12-12 start. They controlled the game offensively and defensively, holding the Cougars to a .186 hitting percentage in the set, while also adding 17 kills and 23 digs to their totals. Ndee finished off the set win for Pitt with her fifth kill of the frame.

A balanced performance with limited mistakes from the Panthers culminated in a victorious third set for Pitt, extending their advantage to 2-1. As Ndee’s spike hit the ground to put the cap on the Panther’s third-game victory, the packed crowd at Fitzgerald Field House erupted off their feet, energizing the team going into the fourth set.

Ndee was pleased to have fans back in the stands after a year playing in front of vacant seats.

“Last year we had cardboard in the stands just trying to make our own energy,” Ndee said. “Having actual fans, knowing that we’ve built a fanbase, that people actually want to come and see us is really cool, we’re just really grateful.”

Riding on the boost that the fans had provided them, the Panthers came out of the gate hot in the fourth set — going on a 3-0 run to start the frame. However, their momentum was quickly stifled by the Cougars, who quickly responded with a 4-0 run of their own.

The rest of the set featured a commanding performance from the Panthers. They maintained a strong lead up until match point behind a dominating stretch from graduate student outside hitter and reigning AVCA National Player of the Week, Kayla Lund. Redshirt sophomore outside hitter Vazquez Gomez also seemed to be all over the court, recording six kills in the frame.

As the crowd got on their feet for match point — with the Panthers up 24-21 — BYU suddenly found its second wind and won three straight points to tie the game at 24-24. Lund brutally dashed BYU’s hopes of continuing to a fourth set with her fifth kill of the game. A clutch block assist from Ndee and senior middle blocker Serena Gray sealed the deal. The Panthers won the final set 26-24, taking the contest 3-1.

Pitt and BYU were nearly even on the scorecard, with the Panthers narrowly edging out the Cougars in kills, assists and digs, while losing out in blocks and hit percentage. But the Panthers’ ability to limit mistakes stood out compared to the Cougars, who ended up compiling 14 service errors to Pitt’s six.

While the Panthers were able to handle BYU from the start, head coach Dan Fisher thought his team didn’t play their best game.

“Anytime you come out and beat a great team, you’re pleased as a coach,” Fisher said. “We weren’t playing our best for much of the game, but we still found a way to win, that was the best thing about it.”

Proving that they can handle tough competition this early on in the year put the Panthers on the right foot to begin the season, according to Fisher.

“It puts us in a nice position for what we want to do and that ideally is to be able to host the first two rounds [of the NCAA Tournament],” Fisher said. “We feel good about the preseason schedule we put together. Our conference is really strong this year, so far in the early going, the ACC has been the strongest conference in the country, so we’re going to be tested all year.”

Pitt finished the Panther Challenge with a victory over Bowling Green at Fitzgerald Field House on Saturday. They were undefeated in three games this weekend and improved to 8-0 for the season.