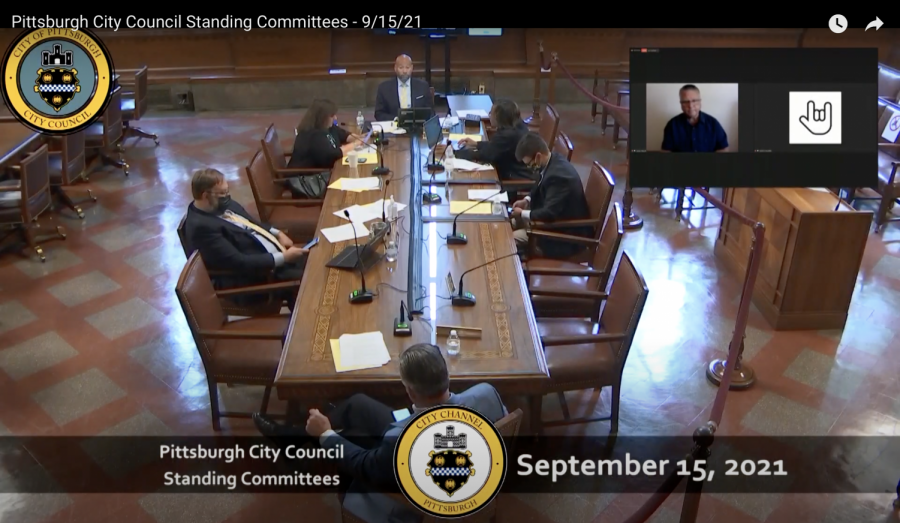 The ordinance would amend city code to require that the scooters are ridden standing up by people 18 years or older. Riders would also be required to travel under 15 mph and remain on streets with a dedicated “pedacycle” lane or on one with a 25 mph maximum speed limit. The scooters also must be parked perpendicular to the curb in a legal parking space or next to a bicycle rack.

Spin, a company that manufactures and designs electronically charged vehicles, partnered with the City’s MovePGH project on July 9 to provide the City with Spin scooters.

The council voted to recommend the bills with a “lengthy discussion,” according to Councilman Anthony Coghill. They will reconvene to make a final vote next week.

The council came to consensus on the stricter scooter regulations after several council members expressed concerns over the scooters’ safety and illegal parking.

Councilman Bruce Kraus expressed his reservations about the scooter program because he isn’t sure people are properly following safety regulations. Kraus ultimately voted in favor of the stricter scooter rules, and said he hopes community members use “common sense” when operating them.

“You can only ride these on streets that are 25 mph or less. You cannot ride them through the Liberty Tunnels. You can’t go across the Liberty Bridge with them,” Kraus said. “And God forbid, I’m getting calls from people in Oakland where people are actually carrying their newborns and riding on scooters.”

“I’m not convinced they’re being used for the purpose of transportation for work,” Coghill said. “So if you want to keep them for recreation, I just feel like we’re taking up valuable parking space and we can dock them somewhere else where people who want to use them for recreation can certainly go use them.”

Karina Ricks, the director of the Department of Mobility and Infrastructure, said the scooter program isn’t just helping students get to class quicker or go for joy rides around the City — they’re actually assisting community members who may not have access to private vehicles.

At the meeting, Ricks said “one-fifth of our City’s households don’t have access to an automobile,” and some live in areas less frequented by other forms of transit.

Ricks said while DOMI doesn’t have specific data on why users are riding the scooters, they do have data on where trips begin and end, and the concentration of trips. Ricks said based on this, she knows the scooters are being used for specific reasons.

“Most trips are being taken for a particular purpose, though,” Ricks said. “Whether that be to get to a friend’s house [or] to park space…”

Councilwoman Deb Gross said she’s received several complaints from people saying users are parking scooters where they shouldn’t be, scooters are cluttering the sidewalks and more. Gross said while she knows some people utilize the scooters for recreation, she also sees scooters parked in front of homes.

“I do believe people are also using them to get to destinations that our public transit system just doesn’t get them to or gets them to that last segment of their trip,” Gross said.

Ricks said DOMI relies on the public to submit complaints about scooter regulation noncompliance. Community members can submit concerns using the five digit number located on the scooter directly to Spin or submit a photo through the City’s 311 system. Ricks said Spin is required to move an illegally parked scooter within three hours of a complaint and users’ accounts can be suspended if continued noncompliance occurs.

Ricks also said Spin practices both proactive and reactive responses to complaints to better manage enforcement. While Strassburger expressed concern about the community operating the scooters while under the influence, Ricks said there are no current plans to deploy breathalyzers on the scooters.

Ricks said safety is a top priority, and ultimately, the scooters have been a successful means of transportation for a variety of Pittsburgh residents. She said community members have taken 156,000 trips in total, averaging 2,800 trips per day and 228,000 miles traveled in total.

“Ultimately, a 3,000 pound vehicle is dangerous in our cities as well,” Ricks said. “And so we really want to promote these other opportunities. There is a deep equity opportunity that drives us in this.”