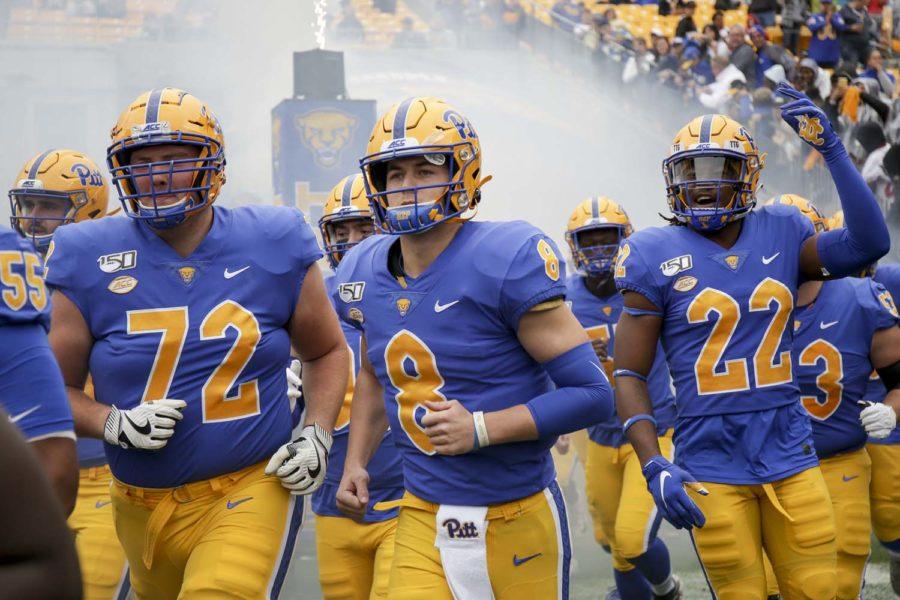 After throwing for 285 yards in last Saturday’s 41-34 win over Tennessee, Pitt senior Kenny Pickett is now just 57 passing yards away from leaping Dan Marino for second place in career passing yards at Pitt.

The Pitt Panthers and Western Michigan Broncos will meet for the first time this weekend. The Panthers come into the game riding high off of a huge road win in Knoxville. But Pitt can’t overlook the Broncos who have talent on both sides of the ball.

Pitt head coach Pat Narduzzi said his guys will be dialed in on Saturday.

“I think we have a mature football team,” Narduzzi said. “We won’t overlook anybody.”

The Panthers will have to show maturity when the Broncos invade Heinz Field this weekend. Sophomore quarterback Kaleb Eleby presents a new challenge for the Panthers, after having one of the most productive seasons of any quarterback in the entire country last year.

Eleby put up an impressive statline in the 2020 season — which was shortened due to COVID-19 — throwing for 1,699 yards and 18 touchdowns in just six games. The sophomore also completed 64.5% of his passes and put up a whopping 194.8 passing efficiency rating. Between Eleby and Pitt super senior quarterback Kenny Pickett, the quarterback play will be must-see television.

The Michigan Wolverines walloped the Broncos 47-14 in week one, but bounced back in impressive fashion last weekend — pitching a 28-0 shutout against Illinois State. Western Michigan will look to build on the momentum it gained in week two.

Here’s what to watch for Saturday.

After throwing for 285 yards in last Saturday’s 41-34 win over Tennessee, Pickett is now just 57 passing yards away from leaping Dan Marino for second place in career passing yards at Pitt.

Only one Pitt quarterback has ever surpassed Marino in passing yards with the program — current Cleveland Browns offensive coordinator, Alex Van Pelt. Van Pelt holds the school record with 11,267 yards.

Being forever linked to Marino and Van Pelt puts into context just how special this achievement would be for Pickett. Pickett returned to school to make history with a team-first mindset, in hopes to win an ACC title, but this will certainly be a noteworthy accomplishment.

Eleby vs the Pitt secondary

Eleby holds the highest passer rating of any returning quarterback at the collegiate level this season. At the end of last season, he only fell behind 2021 first round draft picks — Mac Jones and Zack Wilson.

He leads a Broncos offense that loves to take shots down the field. Eleby hasn’t pushed the ball downfield nearly as much this season compared to last, but against a defense that leaves their corners on an island, Eleby will test the Panthers secondary.

Pitt often employs a pass coverage scheme — it should be interesting to see how Western Michigan attacks this defense. Narduzzi trusts his guys and will stay within that scheme throughout the game, so expect the corners to be tested. Tennessee senior quarterback Joe Milton overthrew some deep balls that could have changed the course of the game last week — Pitt can’t have those coverage busts again or Eleby will make them pay.

How will the rushing attack fare?

The Panthers were underwhelming running the football last weekend in Knoxville, averaging slightly over two yards per rush. But there were some signs of encouragement despite the lack of explosiveness.

Sophomore safety Brandon Hill came away with a key interception late in the fourth quarter, putting the ball in the hands of the Panther offense with just 4:47 remaining in the game. On its final drive, Pitt ran the ball five times for 26 yards before ending the game in victory formation.

The Broncos will be a good bench mark. Michigan gashed the Broncos on the ground a few weeks ago, with the Wolverines rushing for 335 yards on 43 attempts, putting them at an average of 7.8 yards per carry.

WMU turned it around this past Saturday, though. The Broncos held Illinois State to just 28 yards on 26 carries.

Seeing how effective the Panthers are on the ground this weekend will be telling, and should leave fans with a feeling of whether or not they can be able to run the ball efficiently throughout the remainder of the season.

Redshirt senior defensive backs Bricen Garner and Therran Coleman, two former Panthers, will return to Heinz Field this weekend as members of the Broncos. The two both spent four years at Pitt as members of the 2016 recruiting class and transferred to Western Michigan ahead of the 2020 season.

Both are enjoying an increase in playing time at Western Michigan — they’ve started each game this season and will likely start against the Panthers. Garner has flourished since becoming a Bronco — starting all six games last season and en route to being named first-team All-MAC at safety.

Coleman did not play last season due to injury, but received the starting nod in both appearances as a Bronco — equaling the number of starts he made as a Panther. The highlight of his Panther career came in 2018 against Syracuse, reeling in a game clinching interception in overtime.

Narduzzi assured the media that the Panthers will be ready to go come Saturday, and fans should expect them to be, but this won’t be an easy game by any means.

Eleby will test Pitt’s secondary. The Panthers will also be challenged by the Bronco’s potent rushing attack — led by duo of sophomore Sean Tyler and junior La’Darius Jefferson. Both are averaging more than five yards per carry on the season and combined for three touchdowns last weekend.

Expect the Panthers to only be up about seven to 10 points, then to pull away in the second half. The front seven will put too much pressure on Eleby for the Broncos to win this game, but the sophomore will need to be near-perfect because the Panthers will slow down the Western Michigan rushing attack.

Expect the Panthers to pull away in the second half. Kenny Pickett will spread the ball around to his assortment of weapons and will prove to be too much for the Broncos to handle.