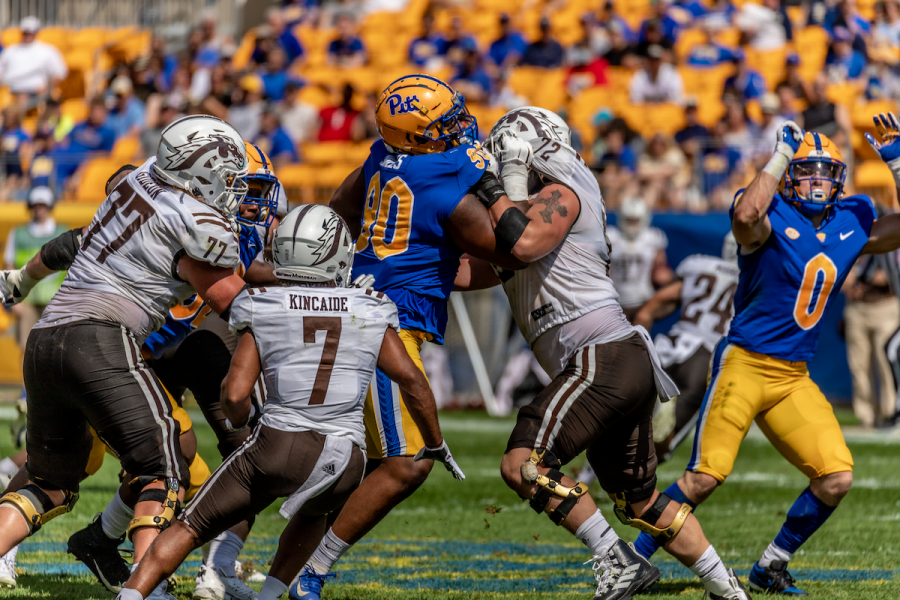 It was a picture-perfect day for football on the North Shore. Saturday was cloudless, sunny and warm.

But the play did not match the scene. Panther fans left Heinz Field in dismay after their team entered another disappointing loss into a program history riddled with similar letdowns.

Pitt (2-1, 0-0 ACC) welcomed the Western Michigan Broncos (2-1, 0-0 MAC) on Saturday afternoon and, in a back and forth affair, the Broncos escaped with a 44-41 upset victory. They tallied more than 500 yards of total offense and beat the Panthers at each of the game’s many pivotal moments.

The first-ever meeting between the Panthers and Broncos was historic, as super-senior quarterback Kenny Pickett stamped his name in the Pitt record books by passing Dan Marino for second place in career passing yards at the school, but he left the game and headed towards the locker room with a sour taste in his mouth.

Pickett posted a dominant stat line, but it was WMU sophomore Kaleb Eleby who came out on top in a high-level quarterback matchup. Eleby and the Broncos came away victorious despite an impressive showing by Pickett throwing for 382 yards and 6 touchdowns.

Eleby took advantage of the Panthers press-man scheme early, connecting on four of his first five passes. WMU drove deep into Pitt territory but the Panthers did not break and forced a 43-yard field goal attempt, which senior kicker Parker Sampson missed.

After the two teams traded three and outs, it took the Panthers just one play to get on the scoreboard with Pickett connecting with his favorite target — sophomore Jordan Addison — for a 67-yard touchdown. It was that pass that catapulted Pickett past Dan Marino in all-time passing yards at Pitt.

Eleby and the Broncos answered back the next drive, marching 75 yards concluding in a one-yard touchdown rush by sophomore running back Sean Tyler, which knotted the game at seven apiece.

The following drive, it seemed that Pickett picked up a first down on a 3rd down and 11, but the ball was knocked loose at the end of the rush and recovered by the Broncos, affording them great field positioning starting inside of midfield.

The next play Eleby found junior receiver Jaylen Hall deep down field on a 38-yard reception before being knocked out of bounds at the three. After a dropped touchdown on third down, the Bronco offense opted to stay on the field and it paid dividends, as junior running back La’Darius Jefferson reached pay dirt out of the wildcat to put Western Michigan up 14-7.

Junior quarterback Nick Patti replaced Pickett the following drive after a left shoulder injury sent the super-senior to the locker room. Patti connected on a 16-yard bullet to senior wideout Taysir Mack, setting up a 4th and 4.

“I feel like it was similar to two years ago,” Pickett said in reference to his shoulder injury against UCF in 2019. “Not as severe though. I’m happy it’s on my left side, just rolled up on a bone — had to go get it checked out so I’ll be fine for next week.”

Pickett returned to the field which gave way to an eruption from the crowd — which soon turned to silence after the Panthers failed to pick up the conversion.

And it only got quieter after Eleby sucked the air of the home crowd by connecting on a 30-yard touchdown to Skyy Moore to stretch the lead to 20-7.

A pass interference call gave the Pitt offense some life on the ensuing drive. It kickstarted a surgical, 75-yard march from Pickett, who found senior tight end Lucas Krull in the end zone for a two-yard pitch and catch, trimming the WMU lead to 20-14.

The Panthers then forced a three and out, and the momentum shifted. Pickett opened the drive with a 38-yard pass to sophomore Jaylon Barden, setting up his second touchdown of the day to Addison, this one for 23 yards. Sophomore place kicker Sam Scarton missed the extra point, leaving the game deadlocked at 20.

After a second consecutive Western Michigan punt, a fumble by first-year running back Rodney Hammond set the Broncos up inside the Pitt 10. The Broncos capitalized as Sean Tyler picked up his second touchdown of the day, this one a five-yard reception.

“Next time I gotta just follow him in the hole and just eat minus two yards, instead of handing it off,” Pickett said. “Live to play another down.”

Redeeming himself following an interception the drive earlier, Pickett found Addison for the hat trick — his third score of the first half — on a 28-yard touchdown, tying the game at 27 with just over a minute left in the second quarter. It was his fourth passing touchdown of the afternoon, a personal record for a single game.

But the Pitt offense lost its rhythm to begin the second half. They led off the third quarter with two consecutive three and outs and mustered just two yards in six plays.

The defense’s struggles continued as it took the Broncos just two plays to get on the board in the second half. Eleby found sophomore receiver Corey Crooms for a 54-yard score giving WMU a touchdown lead yet again with 7:31 remaining.

“I think they were definitely able to find the holes,” Pitt junior linebacker SirVocea Dennis said. “They just did a good job picking us apart.”

Pickett kept carrying the load offensively, matching Eleby and the Broncos blow-for-blow. He connected with Krull again in the end zone for his fifth passing touchdown on the day, evening the score just before halftime.

At halftime with 52 total points already scored, it felt like whoever got the next stop on defense would win the game. Head coach Pat Narduzzi has been adamant for years about staying within his scheme, and that same stubbornness cost his team a win. His insistence on staying in a press-man look led to a litany of third down conversions for WMU. The Broncos converted seven of 17 third downs, meaning that the Panthers were unable to get off the field.

“It starts with me,” Narduzzi said. “I didn’t have them ready to go.”

A refusal to adjust led to a Western Michigan touchdown with 7:31 left in the third quarter. Jefferson found the endzone for the second time on the day, giving the Broncos a 41-34 lead. The Panthers were chasing points all day, with neither the defense nor coaching staff doing them any favors.

Narduzzi didn’t show much trust in his defense late in the game. He kept the offense on the field for a 4th and 6 around midfield with 10:18 remaining in the fourth quarter. Pickett was sacked for a loss.

Their chances of winning were already low and now the tired, shredded defense was put in a short field. They managed to hold WMU to a field goal, but were still down 44-34 with just 5:37 remaining in the game.

Pickett and the Panther offense wouldn’t go down without a fight. He threw his sixth touchdown pass of the day with just under four minutes left in the contest, this time a 22-yard touchdown to Barden, making it a three-point game.

Among all the impressive throws made, Eleby made arguably the most impressive. On their game-clinching drive, with his team backed up in Pitt territory, Eleby connected with sophomore receiver Corey Crooms while under extreme duress from senior linebacker Cam Bright. As he took a big hit, Eleby still delivered a first down, proving to be the deciding factor in the game. The Broncos would proceed to run out the remainder of the clock and celebrate on Pitt’s home turf.

The Panthers will look to get back on track next Saturday, Homecoming weekend, at home against New Hampshire. Kickoff time at Heinz Field is scheduled for noon.