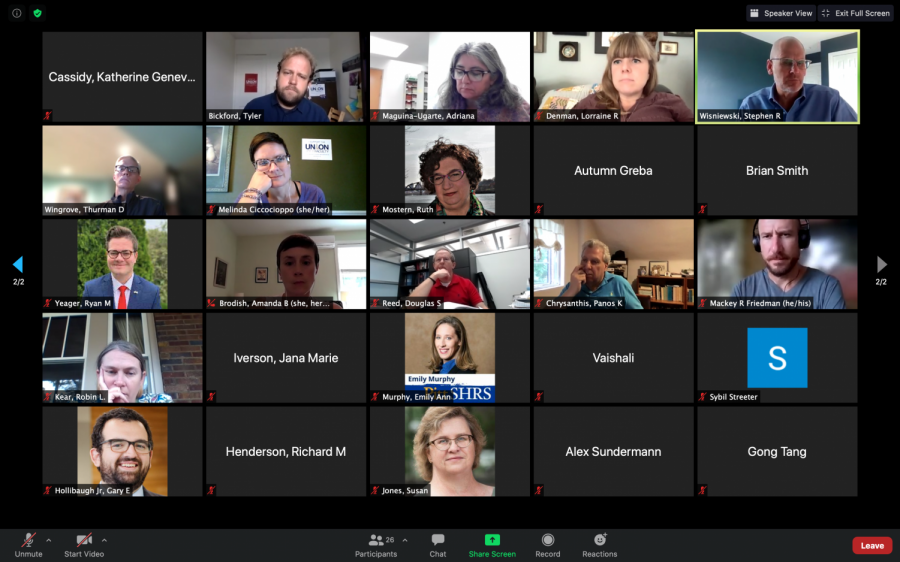 The Senate Budget Policies Committee held its first meeting of the year via Zoom on Friday.

Despite Pitt enrolling roughly 880 students more than it initially planned for, the University’s multibillion dollar budget for the 2021-22 school year isn’t seeing many changes.

The University Senate’s Budget Policies Committee held its first meeting of the academic year via Zoom on Friday, where members discussed the University’s 2021-22 budget and a subcommittee report on Outlier, a program that allows students to take introductory courses online.

Tyler Bickford, an associate professor of English who chairs the committee, emphasized his concerns over the lack of modifications to the budget. Bickford said departments have been “on fire” this term and additional revenue from students could be used to alleviate the burdens that come with faculty members taking on additional courses and adding students to classes.

“880 students is approximately $17.5 million,” Bickford said. “It easily zeros out the budget cut and gets us a 2.25% salary pool. We are looking at an amount of ongoing, operation revenue that does not seem to be baked into the operating budget.”

Stephen Wisniewski, the vice provost for budget and analytics, said the additional revenue from the 880 students is not reflected in the operating budget, but a large portion of the money will be used to offset the accompanying costs of having more students.

“Bringing in the bigger freshman class has its impact,” Wisniewski said, “The financial aid budget was higher, housing suffered because we had to get additional spaces. There are several additional costs associated with it.”

Thurman Wingrove, the University controller, reported on the 2021-22 budget and reiterated its key figures which Board of Trustees committees approved in July. Wingrove said tuition increased between 1.5% and 4.5%, similar to previous years. Salary increases among faculty will be divided across four categories and a 1% cut was made to balance the budget. Wingrove said the four categories are salaries less than $48,470, between $48,470 and $97,000, between $97,000 and $145,410 and above $145,410.

“We worked with the same parameters that we have in the past,” Wingrove said. “We didn’t have any variances between what was approved by the UPBC in May and the Board in July.”

The committee discussed adjustments underway to accommodate the higher number of undergraduate students, such as obtaining additional classroom resources and hiring more faculty members. Lorraine Denman, a professor in the Italian department, said the increase puts a strain on both faculty and students alike.

“I was asked to consider adding seats to my classes, and that has been department-wide,” Denman said. “I just want to make sure people are aware of the additional labor for faculty and the administrative labor for the hiring.”

Wisniewski said the University works hard to meet its targets for incoming classes because of the strain it puts on faculty, students and administrators when admissions go over the target enrollment number of 4,200 to 4,300.

“This goes across the board. It’s hard for Student Affairs who have a fixed staff and a fixed budget. It’s hard for the Counseling Center who has more kids coming in for counseling,” Wisniewski said. “We do not like it when this happens.”

Wisniewski said several factors played a role in the University’s ability to determine numbers of interested and incoming students, such as COVID-19 and new testing policies for admissions.

“We didn’t have campus visits, so we had no idea of gauging who was interested or how many were interested,” Wisniewski said. “We also went with test optional and didn’t really have a good sense of what the return on that would be. It was a complicated year to say the least.”

Sybil Streeter, the director of undergraduate advising in the psychology department, said the enrollment increase affects all levels of the University and suggested creating an individual unit to address the matter moving forward.

“To me, there is an opportunity here for us to form some working group, as this enrollment impacts student affairs, academic affairs, institutional policies,” Streeter said. “It affects students as well. We are all concerned.”

The committee also discussed a subcommittee report on Outlier, which Bickford presented. He said the committee formed the subcommittee last February to “look into procedural questions raised by the Outlier partnership” and to gain a better understanding of the new program. Outlier offers online courses on limited areas of study, and since 2019, the University has been offering credit to students who passed these online programs.

Bickford said the committee asked representatives from Provost Ann Cudd’s office — as well as Pitt’s Johnstown campus, where the program is also being implemented — to respond to the Outlier report, but neither one had been responsive.

“We have had a real challenge getting the Pitt Johnstown leadership to engage with us, and also the provost office to engage with us,” Bickford said. “I am opening this for discussion by the members of the committee and other guests who have read and engaged with the report.”

Melinda Ciccocioppo, a psychology lecturer, argued in a June 2020 op-ed that Outlier courses appeal to students due to their accessibility, but also come with “big differences” from courses taught by Pitt faculty. Ciccocioppo argued that she worries about the course’s instruction, material and lack of student-teacher connection.

Bickford said a flaw in the Outlier program is that the courses offered differ in many ways from Pitt courses and often do not transfer easily.

“The Outlier courses have different course numbers and are created and taught by non-Pitt faculty. They are not easily accepted for the equivalent requirements,” Bickford said. “We determined the process raised some serious questions.”

Ryan Yeager, the student representative for the College of General Studies Student Government, said Outlier is an attractive alternative for obtaining credits.

“It is really great to have those options, not only affordable but also more accessible,” Yeager said. “Obviously it’s really great, but we want it to meet the standards and help move us along in our educational progress. Anything we can do to pick up credits for cheap and make it count is a really good option.”

Morgan Pierce, a graduate student in the history department, said she is wary of courses being taught by professors outside the University due to discrepancies in material, of which most students are unaware.

“Often when students come into the University, they don’t really think about how content is generated in their courses, but that is actually a really important piece,” Pierce said. “That is a main concern for me and it sounds like it is in line with the concerns expressed by faculty themselves with regards to this new program.”

The committee also discussed concerns over a lack of communication about the program as a whole. Irene Frieze, a psychology professor, said she worries that students have difficulty getting help with courses through Outlier.

“If they have questions, they have no one to talk to. They call the Outlier office and they talk to a secretary who has no knowledge of psychology,” Frieze said. “We feel that many of these courses do not have good academic components to them.”

The committee voted to adopt the report on Outlier and plans to send it to the Faculty Assembly for further discussion.

Denman said the committee should bring together a larger group of people — who all have stakes in the matter — to have a more focused discussion.

“I think there should be a larger conversation. A lot of the confusion and anxiety around Outlier stems from the fact that there has not been much communication about what it is, what it does and how we are supposed to interact with it,” Denman said. “We should come together for a discussion, and perhaps agreement, on how to proceed.”