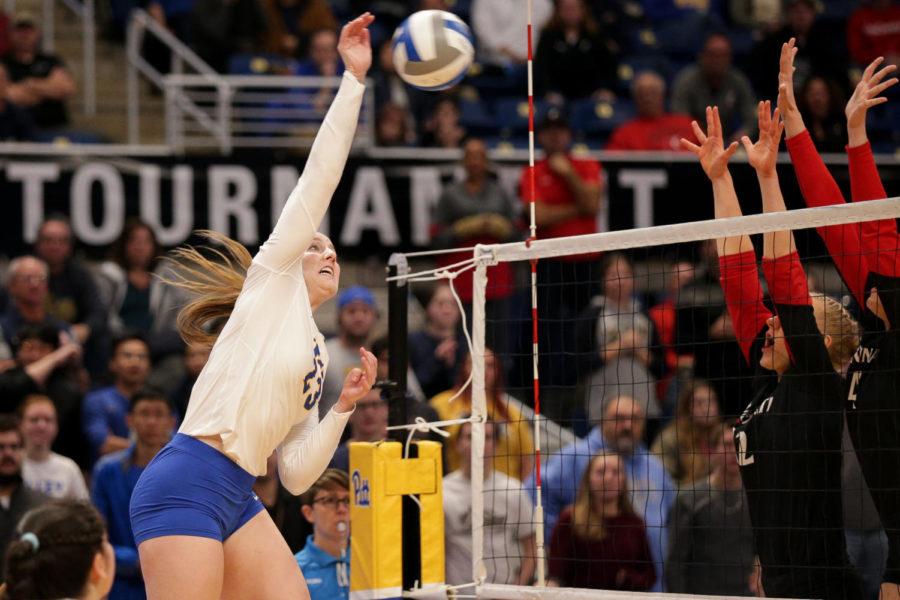 Kayla Lund led a dominant run of Pitt volleyball during her time in Oakland. As she looks toward the end of her time as a Panther, Lund wants to make history and memories on the court.

A hush settled over the tense crowd at Fitzgerald Field House as BYU mounted a comeback in the fourth frame with Pitt leading two sets to one. The Panthers held a comfortable 24-21 lead just seconds before, only one point away from their fourth ranked win of the season and eighth overall. Now tied 24-24, dropping the set would mean a do-or-die fifth game.

The Cougars sent the serve over the net and the Panthers immediately pounced — easily sending the ball back to the other side. The teams went back and forth, trading attacks, but right when it mattered most, graduate student outside hitter Kayla Lund leapt above the net, spiking the ball into the BYU half. The Cougars had no chance of returning it.

Lund’s 15th kill of the match killed BYU’s momentum, and the Panthers won the contest on the very next point. In a game which was statistically lackluster by Lund’s high standards, she came alive when her teammates needed her — winning four of the last five points for the Panthers in the closing set. Her ability to bounce back from adversity is a quality head coach Dan Fisher said is instrumental to the team’s success.

“There’s been so many games over her career where she’s had a bad set or a bad swing, then all the sudden you look at her stats at the end of the game and she’s still hitting .300,” Fisher said. “At any moment she can pull herself out of a rut and that’s the kind of leader we want.”

For Lund and the Panthers, dominance on the court is a yearly routine since her arrival in 2017. During her tenure at Pitt, the Panthers racked up three ACC championships in four seasons, while also making it to the Elite Eight in the NCAA tournament last year — the closest the program has ever come to a national championship.

Before Lund’s arrival, the Panthers were on the rise, but couldn’t quite push into the upper echelon of teams in the ACC. Their record improved from year to year, but ultimately came up just short each of their four years in the conference.

All the way across the country in Pasadena, California, Lund was a phenom — named as an All-American in each of her four years at Flintridge Sacred Heart Academy. Pitt wasn’t hesitant in pursuing the nation’s top talent and it made Lund a top priority, beginning the recruiting process in her sophomore year.

“They were one of the first teams to really start recruiting me heavily and believing in me,” Lund said. “Coming from California was the only hesitation I had about this program, just being in my own little bubble my whole entire life.”

Two unofficial visits and countless conversations with the coaching staff later, Lund finally committed to Pitt during her junior year of high school. There are a lot of reasons why Lund chose Pitt, according to Fisher, but he said it ultimately came down to a stroke of good fortune.

“I’m sure it helped that I was from the same area as her,” Fisher, who’s also a southern California native, said. “I think she just made a good connection with the coaching staff, and we got lucky.”

Now in her fifth and final year at Pitt, Lund can look back at her commitment fondly. From day one of her recruitment, the coaching staff pitched their visions of success and progression with her as one of the centerpieces — visions that would quickly come to fruition and validate Lund’s decision to leave the west coast and come to Pittsburgh.

“I wanted to do something different than staying close to home,” Lund said. “It was scary at the time, but looking back, it was easily the best decision I’ve ever made.”

In four complete seasons with the program, Lund has built a historic resumé of personal achievements. In 2019 and 2020-21, she notched back-to-back ACC Player of the Year awards — the only Panther to achieve the award and the first in ACC history to repeat. She’s also the only player in program history to earn two selections to an All-American team.

Lund continues to etch her name into the Pitt record books this season, becoming the first player named AVCA National Player of the Week in program history.

Fisher knew right away in 2017 that he’d recruited a special player in Lund. But no matter what he and the rest of the coaching staff saw in her in high school, they didn’t anticipate how she’d blossom by the end of her career.

“She has been a better player and person than I could have ever imagined,” Fisher said. “I knew she was a natural leader and a good all-around player. I didn’t know she’d be the two-time player of the conference, and I didn’t know how good she’d be. She’s been a huge part of our success.”

While her list of personal awards and recognition both on a conference and national level is extensive, Lund considers the team’s NCAA Tournament run from last season her proudest achievement.

“Our run last year in the tournament, that has been the one that has meant the most to us as a program,” Lund said. “For us to really finish strong … we were really proud of where we got, and I’ll definitely remember that forever.”

Lund’s ability to lead the Panthers to wins is infectious among her teammates. Graduate student outside hitter Kylee Levers has been teammates with Lund since the beginning — the two of them and fifth-year right side hitter Chinaza Ndee are the only players remaining from the 2017 ACC Championship-winning team. According to Levers, Lund set the precedent for what it means to be a leader of the team.

Levers and Lund are the veteran centerpieces of what Levers considers a “sisterhood” shared between the players. Now in their final years at Pitt, both athletes look to impart their leadership skills upon the younger Panthers.

“She’s a really powerful leader, she leads by example,” Levers said. “It’s been really cool watching her grow and not only get better at volleyball but grow with us and push us to grow. She’s been a steady force when it comes to being a friend and mentor to younger people and being a great teammate. I’ve been lucky to be around her and be a part of her journey.”

Pitt is off to a hot start in Lund’s final season, but ACC play is just around the corner and the conference looks as competitive as ever. Fisher even said after the BYU game that it’s currently the strongest conference in the country.

Looking back on her time at Pitt, Lund knows she will often reflect on the people she’s met and the memories she’s made in Pittsburgh. She said her dominance in volleyball was an added bonus.

“It’s been amazing to be a part of history in this program,” Lund said. “We want to continue to make history in the program, but at the end of the day I’ll remember the small moments of being in the locker room with the girls, getting coffee with the coaches, things like that.”