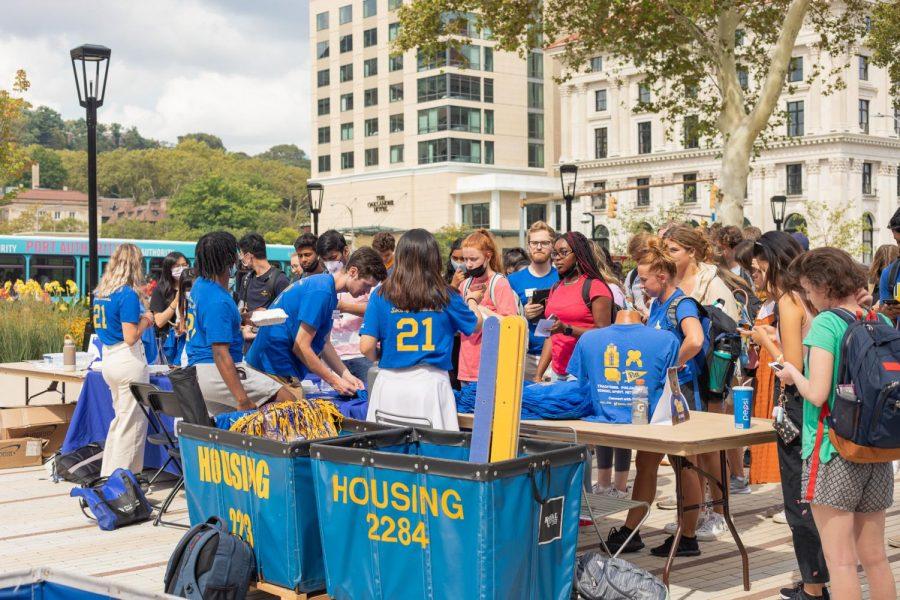 Students in Pitt’s Blue and Gold Society handed out free Homecoming T-shirts at the Homecoming kick-off event held at the William Pitt Union plaza between noon and 2 p.m on Monday.

A line of students snaked from the William Pitt Union plaza to Bigelow Boulevard on Monday — all anxiously waiting for a free Homecoming T-shirt.

Pitt’s Blue and Gold Society held a Homecoming Kickoff event at the William Pitt Union plaza Monday afternoon. Spirit of Pitt candidates tabled in the plaza — meeting with students and handing out free goodies including Pitt popsockets, bubbles and stress balls. Students also received a free Homecoming 2021 T-shirt if they registered for Homecoming events at homecoming.pitt.edu.

Voting for the Spirit of Pitt winners opened Tuesday at noon and will close Wednesday at noon. The two award winners award will be announced at the Homecoming football game Saturday.

Sharon You, a senior computer science major and the vice president of traditions for the Blue and Gold Society, organized the event. You said the event is meant for students to embrace their Pitt pride.

“Besides meeting the candidates, we also have lawn games so they can chill and hang out with one another, because at the end of the day, the biggest thing that we want to do as an organization is push Pitt spirit and Pitt love, and obviously the Pitt family that we have going,” You said.

“We’re happy it was advertised pretty well and we were able to bond with the Pitt community and met a lot of new people,” Ravindran said. “We met a lot of upperclassmen, which is really exciting.”

Ravindran added that she is excited for everyone to finally have an in-person Homecoming again, especially after a completely virtual senior year of high school.

“I’ve talked to a lot of upperclassmen and some sophomores, and they said last year they didn’t really have a freshman year so I’m just excited for everyone to finally have a somewhat normal year,” Ravindran said.

De’Jovia Davis, a senior urban studies major who’s running for Spirit of Pitt, said regardless of votes, she enjoyed tabling because it allows her to connect with Pitt students.

Danielle Obisie-Orlu, another Spirit of Pitt candidate, used the event as an opportunity to meet students and hand out small cards with positive affirmations from her and Roc. Obisie-Orlu said she wants to empower students to be confident and take advantage of Pitt’s opportunities.

“My goal is to just make people feel good, my entire thing is, I want people to feel like they belong at Pitt,” Obisie-Orlu, a junior international & area studies and political science double major, said. “I want them to feel like you have enough of yourself on campus and you have so much to contribute to campus that it can become your home. So whatever you put into this space is what you can get out of it. So why not feel good while giving your all to this space.”

Sydni Ellis and Emily Nemtuda, both juniors in the applied developmental psychology case program, were at the event to receive a free T-shirt and support their friend, Alexa Lascola, who is running for Spirit of Pitt.

Nemtuda, a cheerleader, said she is looking forward to Homecoming and the opportunity to support her friend.

“Well honestly, I just wanted this T-shirt because I wanted more Pitt clothes and I’m excited for Homecoming,” Nemtuda said. “I get to cheer this weekend at the game and my friend’s on court so I’m excited to get to see her too.”

Ellis added that she and Nemtuda wanted the T-shirts to show their Pitt pride and support Lascola.

“One of our really close friends, Alexa, is running so we wanted to make sure we have gear and obviously show some Pitt spirit by repping the Homecoming T-shirts,” Ellis said.

Nemtuda said she is glad to see students finally gather to celebrate Pitt.

“Seeing all the events this week made me happy to see that everyone can finally come together and our school can show their pride … with all of these events and the game on Saturday, I think it’s going to be so much fun with everyone there.”