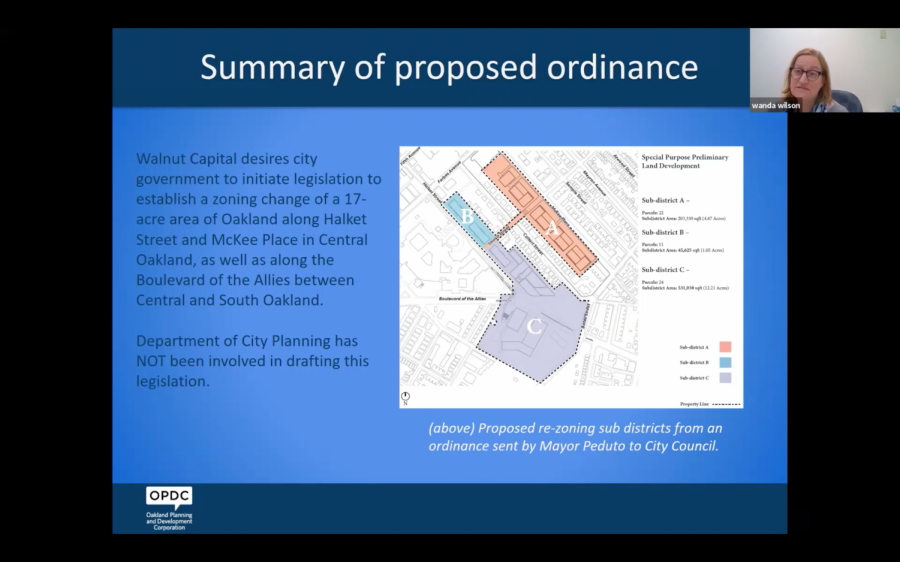 Oakland community leaders said Wednesday evening that private developer Walnut Capital’s current efforts to pass a proposal to reshape vast parts of Central Oakland are an "injustice to the community” that flies in the face of community-driven redevelopment.

Oakland community leaders said Wednesday evening that private developer Walnut Capital’s current efforts to pass a proposal to reshape vast parts of Central Oakland are an “injustice to the community” that flies in the face of community-driven redevelopment.

“There’s all kinds of commercial uses being allowed in buildings that could be 125 feet … if we think about what that might actually end up looking like, it would really … change the whole character of that area of the neighborhood, be very inconsistent to what’s there,” Wanda Wilson, executive director of the Oakland Planning and Development Corp., said. “The buildings would be completely out of scale with the neighborhood fabric.”

Wilson and other Oakland leaders discussed the Oakland Crossings plan by Walnut Capital, which would change certain zoning, or land usage, regulations. Mayor Bill Peduto, who was defeated in this spring’s Democratic mayoral primary, sent legislation this month to the City Council that would implement the plan and asked for its passage. The plan would change zoning rules for a dense, 17-acre area of Central Oakland along parts of Halket Street, McKee Place and the Boulevard of the Allies. Walnut Capital plans to build a variety of mixed-use buildings between six to ten stories, Wilson said.

The Walnut Capital proposal arrives as Oakland continues through a City-led planning process, which kicked off in 2019, to generate a 10-year development plan for the neighborhood. OPDC leaders said Walnut Capital did not involve the City’s planning department in the planning for its proposal, and the proposal does not include affordable housing options and wipe out the neighborhood fabric.

Wilson added that what’s in a Walnut Capital “media blitz” is a distortion of community input in a plan that’s not fully developed.

The Pittsburgh Post-Gazette first reported last Wednesday on the Walnut proposal. In response to concerns raised by OPDC leaders, Walnut Capital President Todd Reidbord said at the time that OPDC was “a fringe group” which did not represent the entire community.

“We have a difference of opinion on what is needed in Oakland,” Reidboard told the Post-Gazette, “to transform it from its current state to a community that’s commensurate with the surrounding world class universities and medical centers.”

Wilson said the Walnut proposal is ignoring the public planning process and does not include “inclusionary zoning or other value capture mechanism.”

Wilson added that she felt the plan was “cherry picking” things that only some community members have said, while ignoring feedback from others.

“The zone change would essentially represent the zoning change for an area that Oakland 2025 identifies as a homeowner preservation priority,” Wilson said.

Andrea Boykowycz, OPDC’s assistant director, said just because Walnut Capital wants to change the zoning of parts of Oakland doesn’t mean it owns those parts. Boykowycz said perhaps Walnut Capital will “engage with” the City to develop public spaces like the park.

“The zoning of a particular area does not affect the ownership of the parcels in it. So what is being proposed is that the City’s park on Zulema would be included in this larger Oakland public realm zone,” Boykowycz said. “Walnut Capital’s development plan does include their hope that they might be able to engage with the City to allow them to develop that private park, perhaps in exchange for another piece of property nearby.”

Lina Dostillo, Pitt’s vice chancellor for engagement and community affairs, said despite the University’s partnership with Walnut on other projects, it did not have any involvement in the rezoning proposal.

“We did not propose this rezoning and we didn’t shape the rezoning,” Dostillo said, “I want to be really clear with everybody that we anticipate that there’s going to be a lot of public comment and public input about this. We will also be commenting.”

According to Wilson, the Walnut plan is concerning for the community and would only provide minimal benefits for Oakland.

“This is alarming because of certainly the content, which we can get into, but certainly the process,” Wilson said. “A piece of zoning legislation to create a new Oakland Public Realm zoning district has been put forth. It was written by a private development entity on its own behalf and submitted by the mayor’s office to the City Council.”