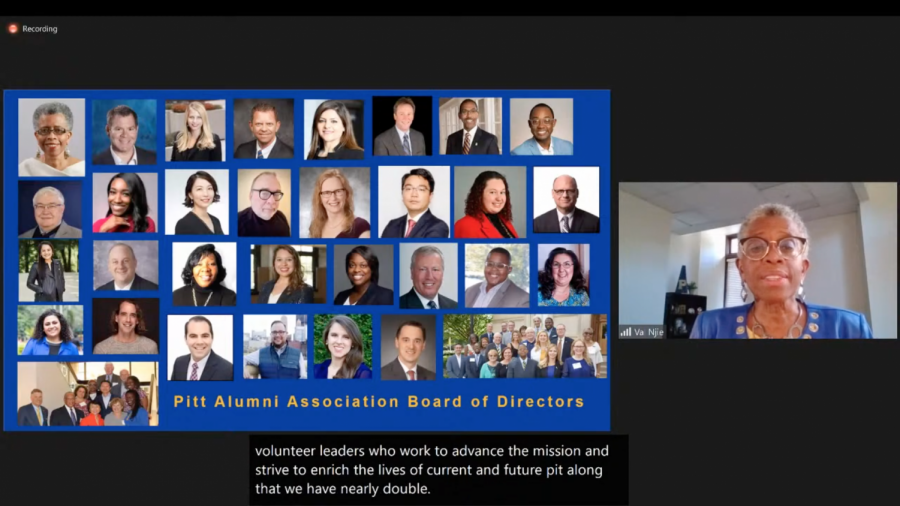 Valerie Njie, president of the Pitt Alumni Association, at Friday morning's Board of Trustees meeting.

The Pitt Alumni Association is working hard to connect alumni with each other and current students, according to President Valerie Njie.

“The Pitt Alumni Association remains committed to connecting alumni to each other and to Pitt,” Njie said. “We work diligently to maintain that commitment under less than ideal circumstances these past 18 months and we look forward to the new opportunities that await us as we begin to gather together once again.”

Njie, a 1971 graduate of the School of Education, presented an annual report about the PAA’s last year at Friday morning’s Board of Trustees meeting. Chancellor Patrick Gallagher updated Board members about University activities at the meeting, and the Board also approved two emeritus trustees, which the Board’s governance and nominating committee considered at its meeting on Monday.

Njie said PAA has “nearly doubled” the number of board members it had in previous years to “include more diverse voices and new ideas.” Njie said 88% of alumni participated in annual donations and she hopes to see that number reach 100% in the coming years.

Njie said engagement with the PAA has gone up in the past couple of years, especially over social media. Compared to 2019’s four million impressions, or social media views, PAA garnered more than six million in 2020. Engagement, or how much people interacted with PAA’s social media, rose from over 140,000 to over 160,000 from 2019-20.

Njie highlighted events and spaces that have played a key role in fostering relationships within the Pitt alumni community, including Pitt Pride Picnic, Women in Leadership Conference and the Pitt Alumni Career Network on LinkedIn. Njie said PAA’s “strategic plan” is to enrich the lives of alumni and students, strengthen the Pitt network and advance the University’s mission.

“Not only are we poised to take on these priorities, but we have managed to advance them significantly,” Njie said.

Njie also discussed how PAA made diversity, equity and inclusion a priority this past year. Some examples include creating a “Spirit of Pitt” award during Homecoming instead of a Homecoming “king” or “queen,” opening up Lantern Night to all students instead of just women and creating an equity and social justice task force within the PAA.

“The PAA staff will be working with key University partners to implement the task force’s recommendations and the PAA board will monitor progress throughout the year,” Njie said. “Meanwhile, we will continue to support the University in its vow to create a more just and equitable campus and we will offer opportunities to all members of our community to engage in meaningful ways.”