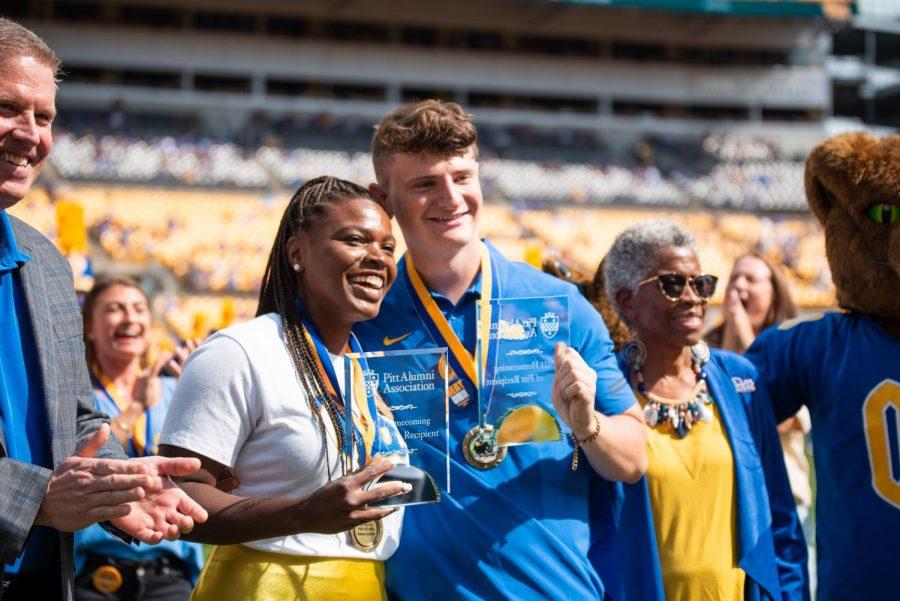 Davis, a senior urban studies major, said being selected for homecoming court was enough of an honor for her — and that winning the Spirit of Pitt award was “surreal.”

“I had a feeling come over me that I had never felt before. My heart sort of skipped a beat and I couldn’t do anything but smile,” Davis said. “I was so excited and so honored to even be on court. The fact that I got selected to represent the University of Pittsburgh as one of the recipients was surreal.”

When Davis won, other members of the Homecoming court embraced her with overwhelming support. She said it was a “fairytale” experience that is still replaying in her head.

“All the hugs and congrats left me in tears. I tried to hold back the tears but the joy in my heart was so overwhelming, I couldn’t,” Davis said. “I had never felt that kind of joy before and it continues to replay over and over again in my head.”

Ian “Monty” Montelius, a senior in the School of Pharmacy, said his love for Pitt has “finally come full circle” after winning the Spirit of Pitt award.

Montelius said his friends surprised him when he returned to the stands to watch the game, and it was an unforgettable experience.

“Once I went up to the stands, I instantly saw a group of my SigEp fraternity brothers and gave them a huge hug and was just totally overwhelmed with emotions,” Montelius said. “After a minute or two, I turned around and out of nowhere I saw two of my coworkers from my whitewater rafting job in my hometown of Jim Thorpe, which completely blew my mind. It’s an experience I’m never going to forget.”

Along with the Spirit of Pitt award, Davis and Montelius each received $1,500 in student resource funding. Davis said while she hasn’t thought much about what to do with the money yet, she will definitely use it for “academic necessities that [she] will need to excel in the classroom.”

Montelius plans to put his $1,500 toward his tuition next year, but he said, for him, the award isn’t about the money.

“The scholarship is nice and all, but it was more about the award and the spirit itself at the end of the day,” Montelius said.

Davis said, after her win, she celebrated with her three sisters — who came all the way from Georgia and Kentucky to support her. She said all of her friends texted her congratulations — which made her feel “so loved.”

“When I came off the field [my sisters] all gave me the biggest hug and congratulations,” Davis said. “That made me cry tears of joy even more. We went out for dinner and ice cream and I got the chance to show them around the City.”

Davis said, although she won, she believes all of the nominees are “wonderful representatives of the University” and she is “honored to even be on the court alongside them.”

For her last year at Pitt, Davis plans to continue giving Pathfinder tours, managing the women’s basketball teams and rooting for the football team in the stands and as an assistant drum major in the band.

She said being a student at Pitt “has changed [her] life forever and in the best way” and she has made great memories here.

“I have made some of the greatest memories yet been through some of the toughest challenges during my time here at Pitt and I would not change it for anything in the world,” Davis said.

Montelius has two years left until he obtains his doctor of pharmacy degree at Pitt after he graduates this spring. He plans to “continue what [he’s] been doing” and he “can’t wait to come back and connect with students at events such as Homecoming.”

Montelius said he’s never won something like the Spirit of Pitt award before and has to find somewhere to put it.

“I might need to go find a nice display case or something for it since I’ve never received anything of that nature before,” Montelius said. “I’m still processing the rest of it.”