Health in the air as the HealthyU fair returns to campus 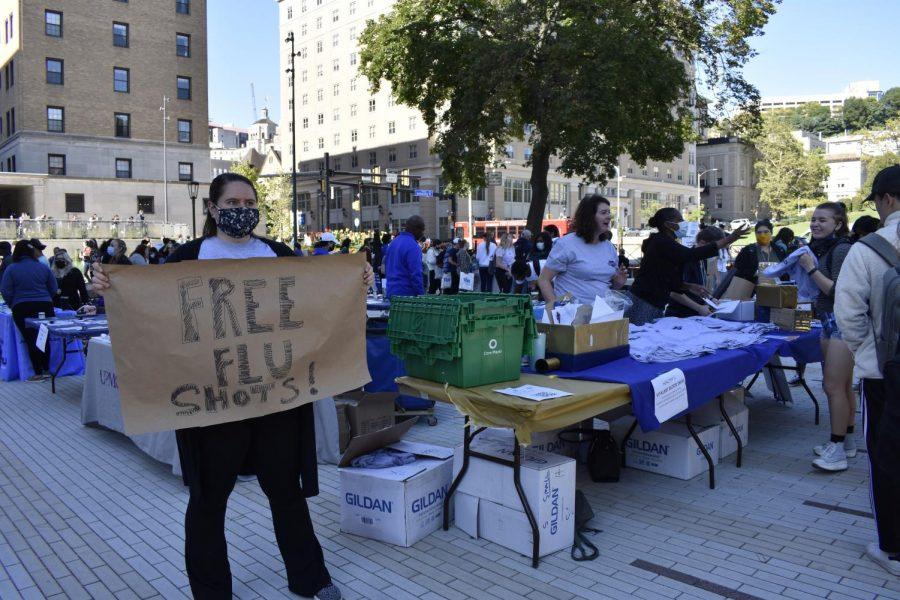 Students could receive free flu shots at the HealthyU fair located at the William Pitt Union on Wednesday.

Apples aren’t the only way to keep the doctor away. At the HealthyU fair outside of the William Pitt Union on Wednesday, students had the opportunity to pick up free face scrubs, get their flu shot and stock up on condoms — and even pick up some apples, too.

Coryn Kline, a first-year nursing student who attended the event, said she was glad to see the University prioritizing the health of its students.

“I think this fair shows that Pitt really cares about its students and that they want to provide resources for them,” Kline said.

Taylor Goss, a first-year nursing student, said she likes how the fair shows the many different areas of health students can focus on.

“I really like that Pitt is focusing on the different aspects of health, because I think a lot of times students forget to focus on themselves and this is a good reminder,” Goss said.

Ricardo Solis — the community initiations manager for Healthy Ride, the local bikeshare system — ran a booth at the fair. He said his organization promotes overall physical wellness, as well as health equity through the use of bikes.

“Our organization really cares about health, and we understand that sometimes healthy options can cost a lot which is why we encourage riding bikes because it is a great way to stay fit and it is also affordable,” Solis said.

Solis also said HealthyRide was at the fair to promote its partnership with the University to provide the first 30 minutes of bike rides for free.

Another booth at the fair was for the Student Health Service. Emmaline LaRocque, a peer health educator and junior psychology major, played a game with students by having them pretend water was 80 proof alcohol and then guessing how many shots were in a random pour. She said it was important to show people the risks of consuming alcohol.

“Some people just seriously underestimate the serving sizes of alcohol and we are just here to help people be aware of serving sizes and help them keep track of how much they may be consuming,” LaRocque said.

LaRocque said the booth also handed out condoms and promoted the idea of a “positive sex language in the lounge.”

“One of our more popular programs that we have is sexual allowance, which talks about same-sex practices and working on making it all inclusive, by using better language to incorporate individuals that would identify outside of the gender binary,” LaRocque said.

Emily Brown, an undeclared sophomore, said she came to the fair for all the free items, but was surprised by all the resources the University had to offer.

“I definitely did come to the fair for all the free stuff, but there are actually a lot of interesting groups over here, and I am happy that there are so many resources available to us so that we can feel good and be healthy,” Brown said.

Another booth at the fair was for Pitt’s Financial Wellness Program, which emphasized the third dimension of wellness — financial — that the fair promoted. Joel Philistin, the director of financial wellness, said it was important to attend the fair this year since many students aren’t aware of their financial situations or how to budget.

“The first financial decisions that are made for most students are in the 18 to 22 year old range, and it’s a time where we can make some mistakes that can last with us for years after,” Philistin said. “So to help students we provide them with the knowledge and tools they will need to prevent negative financial impacts in the future for them.

Philistin also said many students were interested in the programs they had to offer and added that just like his booth, the other booths were there to make sure students knew there were organizations there ready to support students.

“Students have been reacting really well, a lot of students have expressed their concerns about having to budget for groceries and pay bills, and these are things they aren’t used to which is why we are here at the fair to help guide them,” Philistin said. “I think that’s why a lot of the other booths are here as well to help provide the resources to students to set them up for success.”

Brown said she would recommend other students to attend the fair next year.

“Whether it is just to get free stuff or see all the resources available I would definitely tell other students to show up next year because I think it is really helpful for people to see all the options, especially like the free therapy options the counseling center provides,” Brown said.

LaRocque previously worked for The Pitt News as a staff writer.