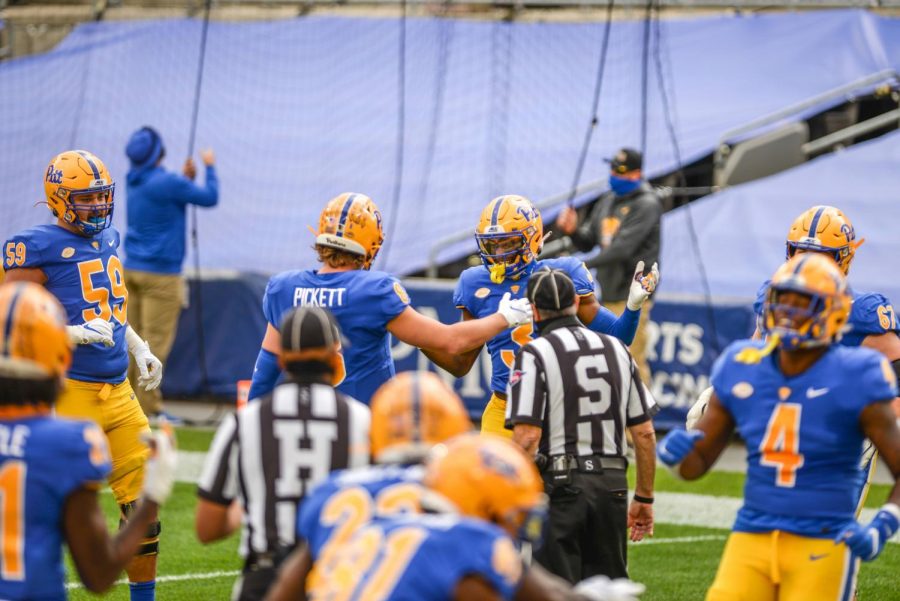 Jordan Addison (3) and Kenny Pickett (8) celebrate the first touchdown at the Oct. 3, 2020 game against NC State.

The Panthers (4-1, 1-0 ACC) went on the road and drubbed the Georgia Tech Yellow Jackets (2-3, 1-2 ACC) with a dominating performance on both sides of the ball. The duo of redshirt senior Kenny Pickett and sophomore wide receiver Jordan Addison connected for 117 yards and a touchdown in the game.

The Panther offense’s first drive made it out to around midfield before Pitt had to punt. They got a glimpse of first-year quarterback Jeff Sims’ elusiveness. Sims saw a hole and gashed the Panthers for a 27-yard run to midfield.

But the very next play the Panther defense made up for their early lapse. Redshirt senior defensive lineman Deslin Alexandre batted the ball in the air and fluttered into redshirt senior linebacker Cam Bright’s hands.

Pickett and the offense wasted no time capitalizing on the defense’s big play. Pickett and sophomore running back Israel Abanikanda marched the offense inside the 10-yard line. Offensive coordinator Mark Whipple called Abanikanda’s name from nine yards out banging in the first score of the game to put the Panthers on the board early.

But the Panther defense wasn’t done making plays just yet.

Redshirt junior defensive lineman Habakkuk Baldonado hit Sims as he threw, and the ball danced through the air and into the arms of redshirt senior John Petrishen, who tucked the ball and found his way to the endzone. This was Pitt’s second defensive touchdown in as many weeks.

But Georgia Tech answered with a score of their own. Sims connected with a receiver deep downfield for a 44-yard touchdown after a lapse in the Panther secondary — something that plagued the Panthers in their loss to Western Michigan just a few weeks ago.

But from here on out it was the Pickett show.

Pickett and his favorite target, Addison, connected for a 47-yard gain. On the very next play, Pickett found Addison on a slant route in the endzone for a score. The touchdown was Addison’s ninth of the year, the most of any receiver in the nation.

The very next drive, Pickett connected with fellow super senior, receiver Taysir Mack, for a quick 55-yard touchdown, only taking 15 seconds off of the clock on the sequence.

After spreading the wealth, with Abanikanda scoring on a six-yard rush, Pickett continued his first-half tear. Redshirt senior tight end Lucas Krull and Pickett connected on back-to-back plays for a total of 45 yards and another touchdown.

Pickett finished the first half with 300 yards and three touchdowns, while completing 68% of his passes.

The offensive line gave Pickett plenty of time to throw, fending off the Yellow Jacket attack nearly all day. The added time for Pickett allowed him to make his reads and complete the long passes.

Defensively, junior linebacker SirVocea Dennis made his presence known, with 2 1/2 tackles for a loss and a sack in the first half. The junior was all over the field, forcing the Yellow Jackets to adjust to where he was on the field.

Baldonado was the other Panther consistently disrupting the backfield. He had his hands on the quarterback on more than one occasion, forcing Sims to make throws sooner than he would have liked.

But the Panther secondary showed some more signs of weakness on Saturday. When he had time to throw, Sims consistently found his receivers with plenty of room to make a move. The Yellow Jackets exposed the Panthers, shooting downfield and picking up big chunks of yardage.

At the end of the day, the defense bent but refused to break. The Yellow Jackets made it to the Pitt side of the field without scoring on a couple of occasions — including a goal-line stand to take a 42-14 lead into the half.

The Panthers continued their trends in the second half, adding another touchdown and surrendering just seven points.

The Panthers start their ACC season with a win. Pitt will have next weekend off and set their eyes to Virginia Tech on Oct. 16.