Latin American and Caribbean Festival takes over front of WPU 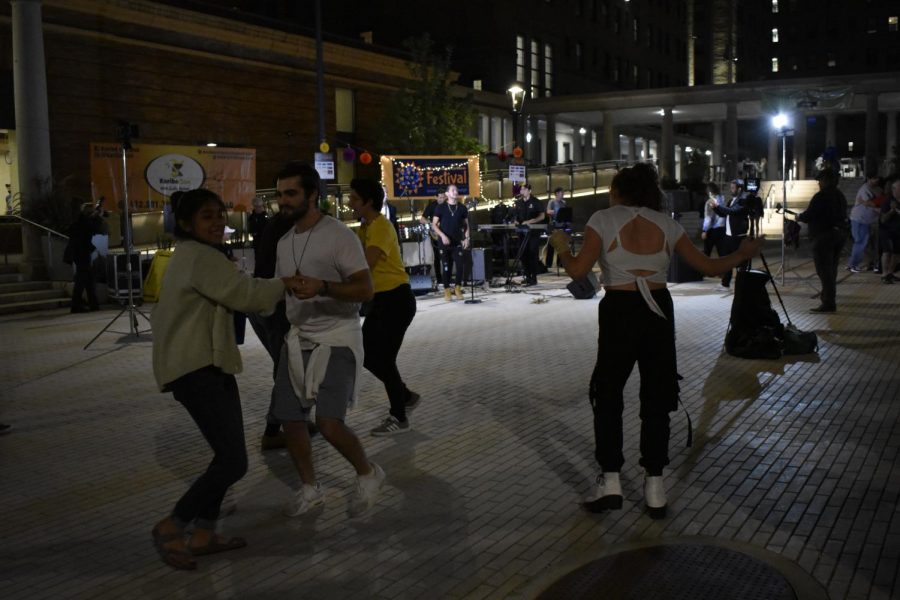 Students dance to the band Karibe Son in front of the William Pitt Union on Saturday night at the annual Latin American and Caribbean Festival hosted by Pitt’s Center for Latin American Studies. The festival included live music, business stands and free tacos.

The truckload of free tacos attracted a crowd of students in front of the William Pitt Union on Saturday night, where some people busted a move to the booming Latin music and tried doing the salsa.

According to Luz Amanda Hank, the assistant director of partnerships and programming for CLAS, the festival traditionally takes place on a much larger scale. But due to Pitt’s COVID-19 restrictions, the festival was smaller this year.

“I call it the ‘fast and furious’ festival,” Hank said. “But we just wanted to keep the tradition 一 the mission of the festival is to showcase the cultures of Latin America and the Caribbean.”

A Colombia native, Hank is a Pitt alumna with a B.A. in Spanish and a certificate in Latin American Studies. She has been involved with the festival since she started working for CLAS in 2002.

According to Hank, before the COVID-19 pandemic, the Latin American and Caribbean festival usually attracted between 3,000 and 4,000 attendees as well as 120 artists and food vendors. This year, there were two food trucks, a performance by Latin band Karibe Són and two Latinx-based business stands.

Howard Alvarez, the programs administrator of the Pittsburgh Hispanic Development Corporation, held one of the stands at the festival. He came to Pittsburgh from Venezuela two and a half years ago and said he found the Pittsburgh Latinx community to be vibrant and supportive.

“I didn’t think that I would stay here, but Pittsburgh is a welcoming city,” Alvarez said. “I have a passion for working for communities 一 everything related to human rights and human services 一 I feel Pittsburgh gave me a great opportunity to connect with PHDC.”

According to Alvarez, PHDC’s mission is to improve the lives of Latinx families in Pittsburgh by providing them with employment opportunities, housing assistance and business startup support. The company also recruited student interns at the event.

“Through CLAS, we are referred to students who want to assist Latino businesses to improve,” Alvarez said. “Interns learn to connect with the housing, employment and community initiative in PHDC.”

Matthew Parungao, a first-year business information systems major, came to the festival to enjoy the music and food. He said next to the tacos, learning more about the Latin American and Caribbean community on campus was his favorite aspect of the festival.

“For a lot of University students, this may be some of their first exposure to different cultures,” Parungao said. “Back home in Nevada, there’s a large Latin American population so it’s cool to see that here.”

CLAS ambassador Peyton Stuart, a senior natural sciences major, took on a leadership role in CLAS after he studied abroad in Costa Rica. He said since he has been speaking Spanish for seven years, he wants to immerse himself in Hispanic culture. His experience drove him to earn a certificate in Latin American studies.

“When you actually go immerse yourself in the culture, it’s a lot different than reading out of a book,” Stuart said. “Studying abroad really makes you fall in love with the culture a little bit more.”

Stuart said he felt his experience with CLAS completely changed his experience as a Pitt student. Although he is not Hispanic himself, he said his vast involvement in CLAS gave him a new perspective on Pitt’s community.

“It’s cool to kind of look at the demographic and experience the culture,” Stuart said. “Being so involved with the Center allows me to get involved with other organizations on campus 一 it enriches my major and makes my experience as a student more fulfilling.”

CLAS has a multitude of other upcoming events for Pitt students, including the “What’s In A Name?” October lecture series, film series and arts and crafts workshops. According to Stuart, these are excellent networking opportunities for the Latin American community, as well as those who wish to learn more about the culture.

The festival is just one aspect of Hispanic Heritage Month. According to Hank, CLAS is also going to have a panel at Pitt’s 2021 Latinx Connect Conference on Oct. 14-16. The conference will center on conversations about Latinx activism in Pennsylvania. CLAS will discuss topics such as Latinx representation in the media and advocacy for trans Latinx people.

Hank said CLAS had to postpone the festival three times since April 2020 due to COVID-19 pandemic restrictions, so she was glad to have a smaller celebration with the Pitt community.

“It’s really about the people. When we do the festival, it’s a way for Latinx people to relate with the community,” Hank said. “It’s smaller this year but we still want to give students that sensation of what Latin America is like.”