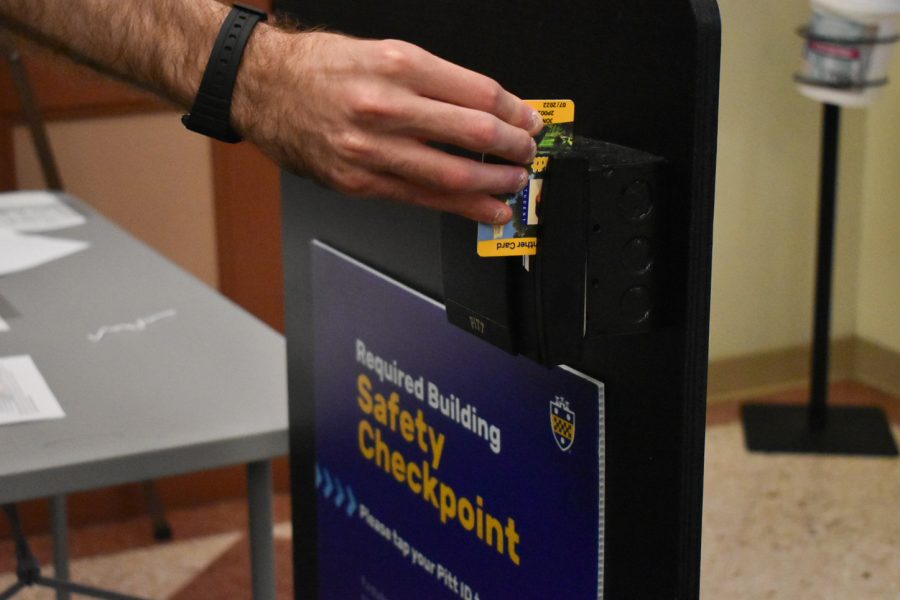 A student scans into the William Pitt Union.

For Carley Clark, working as a building concierge can be difficult, even though many Pitt students, faculty and staff are familiar with the process of scanning into buildings.

“Some people are just like, ‘It’s ridiculous that we have to do this,’ but it’s not my rules, it’s the University’s,” Clark, a sophomore pre-medicine major, said. “People sometimes give backlash to us when we’re not really the bad guys here, we’re just doing our jobs.”

Zullo said when the University decided to allow students to stay on campus for the 2020-21 academic year, despite nearly all online classes, they decided to institute new safety measures when people entered campus buildings. She said she helped organize the program, which launched last fall.

“Last year we decided that we needed to have this program. It was something that came down from the administration,” Zullo said. “I had just mentioned to my boss, ‘Hey, you know, if there’s anything I can do, let me know.’ And it was, I think the next day, he said, ‘Do you mean what you said? Because we need some help here.’”

“We knew we were going to need a whole lot of people to manage this program and we thought, hey, our students, why not give them the opportunity? We knew that employment for our students was pretty limited last fall, especially with all the COVID things that were going on,” Zullo said. “We posted the position, not knowing what we would get in response. And we really had an overwhelming response from our students. They wanted these jobs and they were eager to help. So we were really excited that we could give them the opportunity.”

Now that classes are fully in person, and traffic in and out of campus buildings has expanded significantly, building safety concierges are still working to keep Pitt students safe and signing in.

Noor El-Dehaibi, a senior urban studies major, said she finds that most students sign in without a hassle.

“Just having some vague semblance of authority means that I can get people to pull their masks up, I can tell them to wear a mask, I can do things like that,” El-Dehaibi said. “I think that’s the primary service of this job.”

“I mostly focus [on the job]. If there’s downtime I’ll do work, but I like the opportunity for meeting new people and getting familiar with faces,” Sinclair said.

But she added that not all of these interactions end in a civil manner.

“A student was walking by, and he didn’t have his ID, and when I called him, he called me a b—-,” Sinclair said.

“I’m usually in David Lawrence and it’s a lot of freshmen who obviously haven’t been here. Even sophomores, they don’t really understand why they have to tap in,” Almodovar said.

Almodovar described a particularly “dramatic” example when a student who forgot his ID was asked to leave.

“The security guard told him that he needed his ID, the student said he didn’t have it, that he had a class,” Almodovar said. “The guard said ‘I can’t let you in.’ The student started cursing and saying that he didn’t like the school and then he stormed out. That was probably the most difficult just because it was dramatic.”

According to Sydney Hawk, a sophomore accounting major, students aren’t the only issue. Hawk said she had an encounter with a professor who forgot their ID before a class.

“A certain professor came in, didn’t have her ID and one of the police officers came in and told her she had to go get an ID at Panther Central. But instead of wanting to take the time to do that, she reached out to the department head to try to get them to fill out a University guest pass,” Hawk said. “She had to end up cancelling class because she couldn’t get the guest pass and she couldn’t get her ID in time so she had to cancel a 100 person lecture.”

However, not every building safety concierge has a horror story. Dom Gallo, a junior in the athletic training program, said he got the concierge job through work study.

“Last year, at the beginning of my sophomore year was when they introduced it, and I had a work study so I was just on the website applying to jobs and this one offered me the job,” he said.

“Everyone always swipes in. I mean, people come in a lot without a mask on or they just walk by and I have to tell them but everyone usually just comes back,” Gallo said. “It’s not too difficult. Just watching people coming in and out, making sure they’re swiping IDs and wearing masks.”