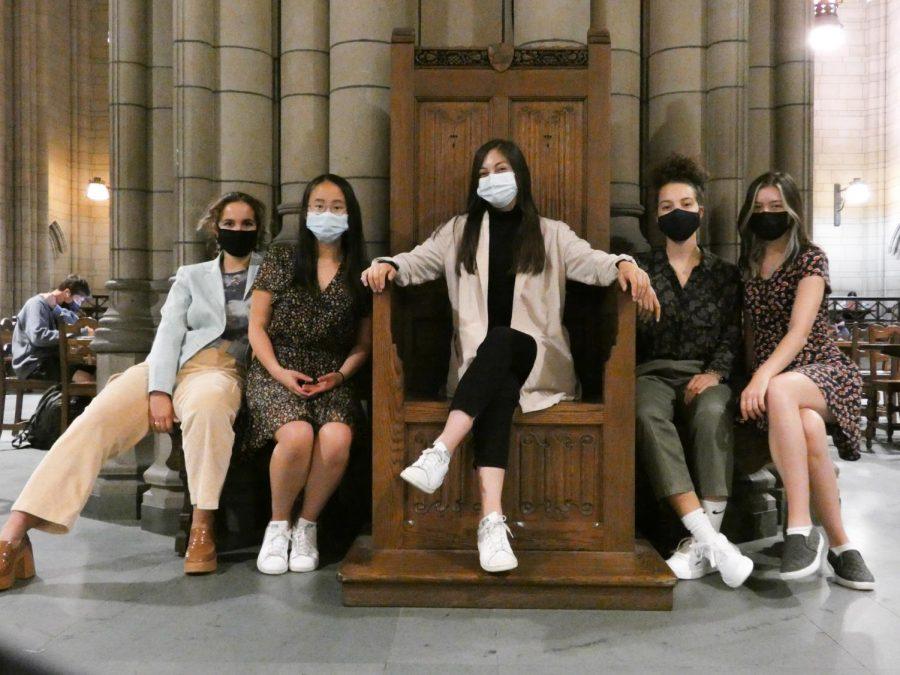 The executive board of Pitt’s Multiracial Student Association.

When Jasmine Al Rasheed joined the Multiracial Student Association, she knew she found her home on campus.

Al Rasheed, MUSA’s social media chair, grew up near Greensburg, Pa., an area she said had little diversity. Wanting to connect with other multiracial people, she looked for an organization that represented her identity.

“I am a mixed person, but I grew up in a very white area. I never really knew a lot of mixed people growing up,” Al Rasheed, a junior sociology and international and area studies major, said. “I found the club and realized this is where I belong.”

The Multiracial Student Association, founded in 2017, is a student organization that aims to “offer a safe space for mixed people on campus,” according to Olivia Jenkins, the club’s former president and current business manager.

“Our main goal is to offer a safe space for mixed people on campus. It can be really confusing being mixed. Especially when you are put in a new area, and especially for freshman,” Jenkins, a senior geology major, said. “Monoracial people don’t have the same experiences that we do. It is nice to have a space on campus that is available for us to be ourselves.”

MUSA holds general body meetings every other week focused on a specific topic related to diversity — such as how mixed race people are represented in the media — where members of the club’s executive board give a presentation, and the group discusses thoughts and questions that arise during the presentation. Aside from general body meetings, the club plans leisure activities so members can bond with one another. Previous trips include going to dinner, thrifting and visiting art galleries that highlight multiracial artists.

MUSA held all of its meetings and events virtually last year due to the COVID-19 pandemic, which Al Rasheed said created an environment that was unfortunately “very stale.” Al Rasheed said the group is “great” in person now that the social aspect is reignited.

“It was definitely difficult. We were pretty much all on Zoom last year, so we didn’t get as many numbers as we wanted to. We are also a club that focuses on the social aspect of being with people who are like you. So, we couldn’t get that fun environment. It was very stale,” Al Rasheed said. “Now that we’re in person that has changed a lot, in a great way.”

According to Jenkins, MUSA is not exclusive to multiracial individuals, despite its name. Monoracial people who were adopted and “lived in a home that was ethnic in some way” can also find a spot in the club, she said.

Michelle Evans, MUSA’s current president, said people of all races are welcome to join the club and educate themselves on the issues multiracial people face.

“If you’re not mixed, definitely come out. We love to meet people, we love to educate people, this year I think there are a few members who joined who actually aren’t mixed. They’ve so far learned a lot. If you want to learn, definitely join,” Evans, a junior biology major, said.

Executive board members all agree education is an important aspect of MUSA. The club educates members on many aspects of having a multiracial identity, Al Rasheed said.

Evans said MUSA gives students an opportunity to make friends who understand struggles that multiracial people may face. Evans recalled constantly having her identity invalidated by her peers while she was growing up.

“My parents are not from the same culture and not the same race,” Evans said. “Even in high school people would say things like, ‘You can’t be mixed’ or, ‘That’s not a thing.’”

Jenkins said it has been “amazing” having people around who she can relate to and rely on.

“Even if you just have something to rant about, something weird happens, and to you, if that is related to being mixed somehow, you have a group of people who are going to understand and have similar experiences,” Jenkins said. “It’s been amazing to have people around that I know I can relate to and are all there for each other.”

According to Al Rasheed, MUSA hopes to create a space where multiracial students can connect and feel comfortable on campus. She said members have a strong bond with each other and love to meet new people interested in the club.

“A lot of mixed students don’t really feel like they have a place at home. You are feeling like you are divided between two worlds,” Al Rasheed said. “We want to make at least a once a week place where you can feel you are meeting people like yourself. We understand the struggle.”